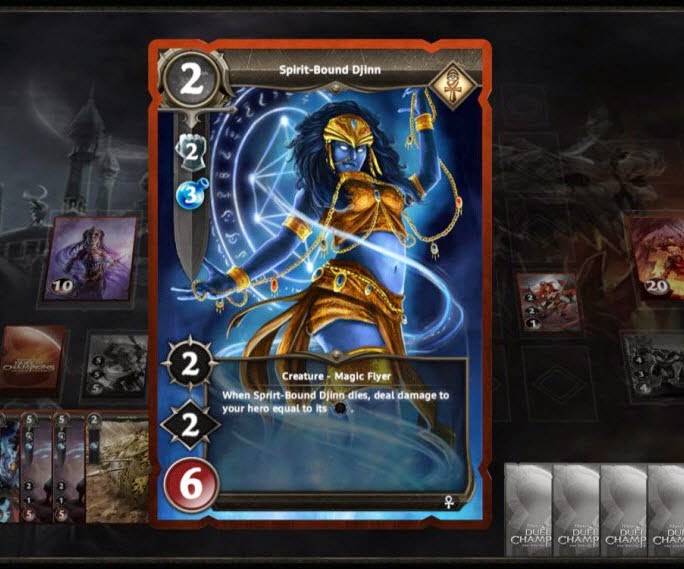 Collectible Card Games (CCGs) have become hugely popular in video games. From Magic the Gathering to Yu-Gi-Oh! and Hearthstone we’ve seen a great mix of physical games that have found their way over to the digital realm, and other games that have been built from the ground up for digital platforms.

Might & Magic: Duel of Champions has been a regular part of my gaming rotation since I first played it over a year ago. On the PC it is a free-to-play game that is quite reasonable on the microtransations; it’s possible to amass a decent selection of cards just through regular play and logging in on a nightly basis. Now released on the Xbox 360 and with the subtitle Forgotten Wars, the basics of Duel of Champions are still the same, with a couple of new wrinkles and potential barriers introduced along the way.

Firing Duel of Champions up felt immediately familiar. The gameplay is exactly what I have come to expect from Might & Magic: Duel of Champions. It’ll be a familiar game for anyone who has played CCGs in the past, but for those that haven’t: Duel of Champions is a turn-based CCG. Each turn players generate resources, and every card in your deck requires resource points to “cast” onto the playing field. Finally, more resources are earned in later turns to steadily escalate the conflict. 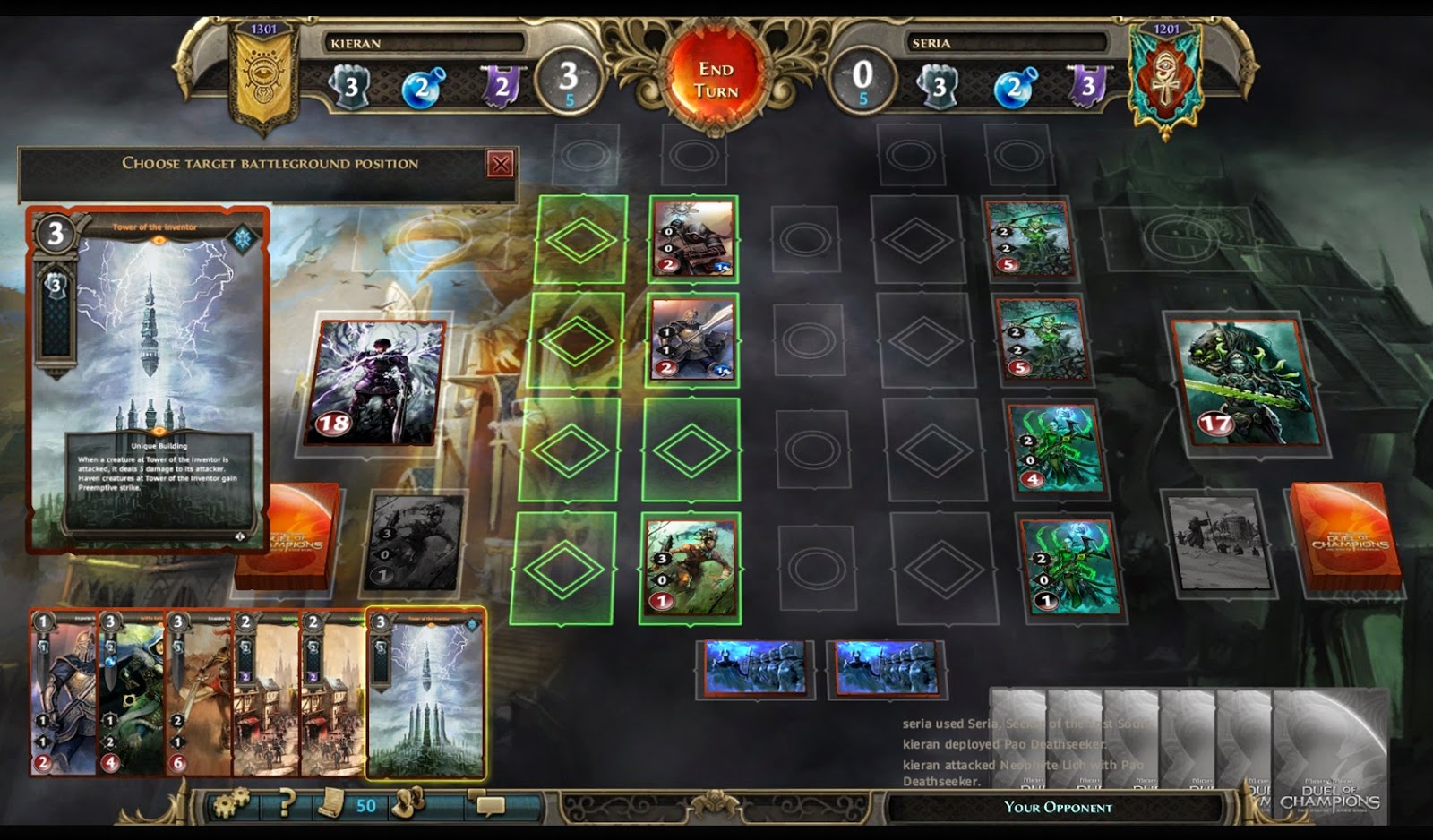 Cast cards are then played out on a grid, where horizontal and vertical positioning are important. Most cards are characters or monsters, and once on the playing field they can attack their opponent. If an enemy card is in the way, they exchange blows. If not, then the attacking card deals damage to the opposing general. The game is over when a leader’s health falls to zero. The premise is simple, but like most strategy card games, there are a good number of wrinkles that can be thrown into every match. The diversity in the cards is one of the primary appeals to Duel of Champions. With regular releases of new cards come a spectacular array of unique creatures, spells and more.

With players gaining more and more cards, new mechanics get introduced to the game. The PC game, if you use real money to speed up your acquisition of cards, can run a hefty tab. Forgotten Wars only rings in around ten dollars on the Microsoft store, so I was curious to see if all of the cards would be available for that relatively low asking price.

Unfortunately they are not, there is a limited number of cards available early on. The initial decks do their job, and the training is handled well in the early stages. One advantage this version has over the PC game is that on the free-to-play version you are given a single deck to play with at first. Here you have access to a base deck from each of the houses or types of decks, which was really nice. I like to spend time going through the single player campaign with each deck, and there are bonuses for using a different type of deck for the scenarios. The downside is, all of these additional sets, beyond the most basic of card decks, are hidden behind pay walls. 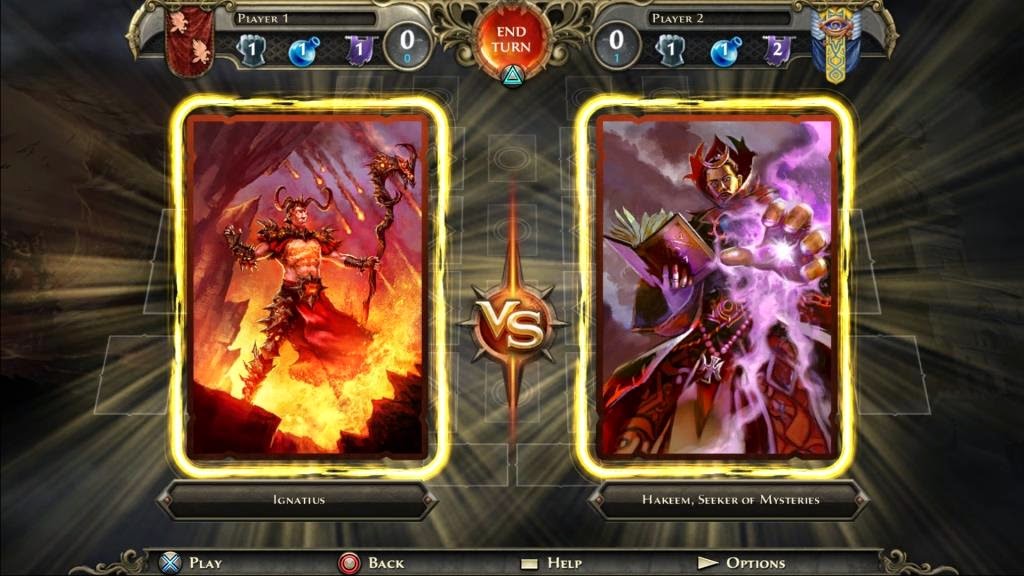 Building up your supply of cards themselves is not too hard and this is the primary area where the game is different than the free-to-play PC one. Each time you win a match, you have the option to ‘spin’ a slot machine-like set of wheels. Each wheel then displays a random card of random rarity. If you see a card you want from this spin, you pay some gold, which is easily enough attained by winning matches.

However some cards belong to different sets from the one bought with the base game download. This means that you cannot get them without having paid real money to unlock these additional sets. It’s more than a little frustrating to have these great cards dangled in front of me along with the demand for more of my money.

The shame of it is that I thoroughly enjoy the deck building process. There is a great deal of flexibility to be had here in setting up a variety of decks. The game itself is worth it, as Might & Magic: Duel of Champions is an outstanding collectible card game, but I do get more mileage out of the PC version.

Trailer: Ubisoft has a new Assassin’s Creed game on the way for the PlayStation 3 and Xbox 360