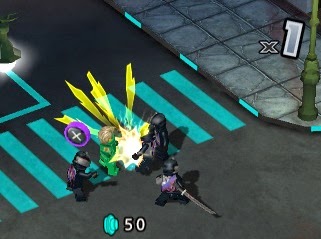 My son is a massive LEGO nerd, and LEGO Ninjago is one of his more favoured LEGO brands. So it was with great excitement on his behalf when I mentioned that I would be reviewing LEGO Ninjago: Nindroids for the PlayStation Vita.

Upon booting Nindroids, it became quickly apparent that the game is based off of the first few episodes of the Ninjago Rebooted television series which is currently airing on televisions around the world. The title seems rushed as a result, as there is no real fitting conclusion. I’m not sure why the developer and publisher saw fit to release a game before the entire season was finished, but I suppose much like LEGO Hobbit, we will see a sequel that will finish off the story at some point down the track.

One of the saving graces I found with Nindroids was the fact it, like some other recent portable LEGO games has been made more, well, portable friendly. Titles like LEGO Batman 2 and LEGO Lord of the Rings were replicas of their console brethren, and therefore had lengthy levels that could not possibly be completed on a bus trip or while in a waiting room. Nindroids follows the formula of the LEGO Movie and LEGO Marvel games, with a greater number of shorter levels designed for the handheld experience. This means that the game comes with a fixed isometric camera angle and less puzzle elements, and that’s fine for what the developers have intended, as it loses that whole depth perception problem rife in other LEGO titles. 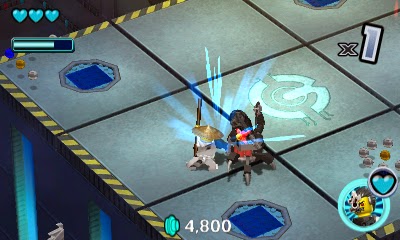 The basic plot of Nindroids sees the LEGO Ninjago team having to find the Technoblades, weapons that contain mystical powers, and stop Overlord’s plan to take over Ninjago City with the titular Nindroids. Think of the Ninjago team as the Ninja Turtles and Overlord as Master Shredder, mix in some Neo Tokyo and LEGO, and there’s the basic idea. The stories are told with pre-rendered and in-game cut scenes, and contain the general LEGO humour most have come to enjoy.

My son enjoys the LEGO brand of humour, and I gave some time for him to check it out, as being a 12 year old boy, is one of the people that Nindroids will be trying to court. I asked him if there were any particular problems he had with the game that a 31 year old male who is used to reviewing games might not think about. He wrote a list for me, and the major points that stuck with him were the fact that there are different voice actors for the game rather than the cast of the television show (I verified this by writing down a bunch of names from the credits, and none of them were in the show). He also told me that some of the LEGO characters had different abilities than what they had in the show as well, and that annoyed him throughout the game. Overall, he said it was fun despite these flaws. 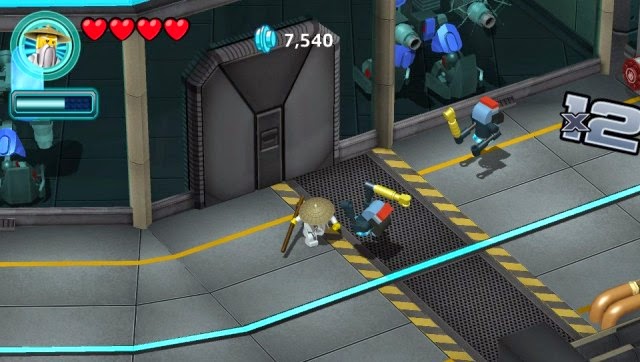 Aside from what I have listed here, LEGO Ninjago: Nindroids follows the basic LEGO formula to a tee, there are red and gold bricks to collect, you need to play through story levels before you can go back to them and play them in Free Play as any character you have unlocked. This adds the essential replayability, and some of the challenges for the gold bricks are fun to do, so it does have the ability to keep a child occupied for a lengthy time.

LEGO Ninjago: Nindroids is the fourth (and not final) LEGO game to come out in 2014. I say this because LEGO games tend to be much the same, not offering much difference in terms of variety, just a different coat of paint based on the license it is based upon. Kids will get a kick out of it (unless they are picky about certain aspects of the franchise), and platinum trophy hunters will probably eat Nindroids up. With its short but sweet levels, it makes sense for handheld gaming too, just don’t expect anything ground-breaking from the latest LEGO game.

Trailer: Watch Bloodborne in action, be reminded of those Souls games