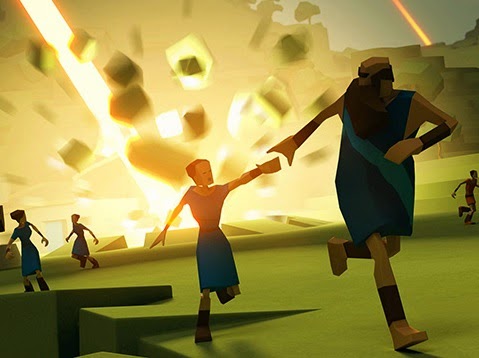 If Godus was Just Another Farmville Clone by some random developer, then it would be easy to ignore. But this is the game that was meant to be the spiritual sequel to the legendary Populous by the man that created Populous himself, Peter Molyneux. And in that context, this game is nothing short of offensive.

Nothing about Godus does anything that Farmville clones don’t also do. Players tell their little people characters to create buildings, which automatically generate resources that can be used to reform the terrain (creating room for more buildings) and command their little people characters to do more things. These buildings also increase the population of the town, or perform a range of other functions, all of which lead to unlocking yet more buildings to create.

All of these functions naturally have timers, as any “good” Farmville game throws in. Players need to wait a few seconds at first to build a beach hut. But then you’ll naturally need to start building houses on grassy plains and the like, and these take minutes of time to build instead. Then the buildings will get bigger again and soon you’ll be waiting for big blocks of time to do anything. Unless you use gems, naturally. These are bought with real money to speed the process up. 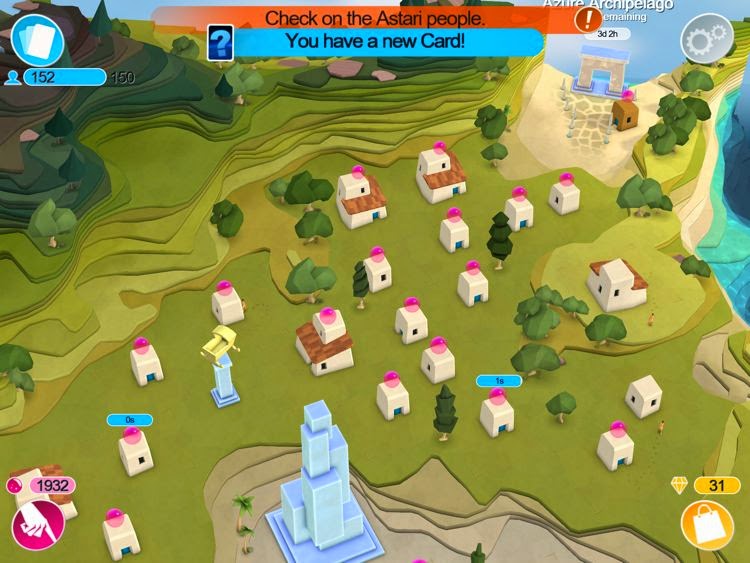 Sneakily, Molyneux throws in mini games to try and convince you that there’s depth to Godus, but these don’t last long. Playing a watered down version of Lemmings, where I need to create pathways, lower mountains and block enemies from reaching my little people as they wander on auto-pilot towards a shrine isn’t a compelling experience. Especially when the AI and pathfinding is as bad as these people-lemmings display.

Upon returning from these minigames you’ll need to expand your territories (by occupying “expansion torches” which are lengthy countdown timers themselves), and track down “stickers” which give characters more actions. These can be earned through the minigames, or tapping on treasure chests which are hidden in plain sight throughout the environments.

What’s so depressing about this all is that if Godus was a premium-priced game and didn’t need to indulge in the timers and gems nonsense, it has all the potential in the world to be something special. Visually Godus does look like the spiritual successor to Populous. Environments are bright and colourful and the music is completely appropriate to the theme. There’s also some nice little touches, such as villagers wandering around town, building fires for warmth or taking a bath in the ocean. These touches give the game a sense of breathing personality, but after a brief smile every time my people did something unexpected for the first time. But then I needed to go and build another hour-long building, and by the time I came back the little fellows had gone back home. 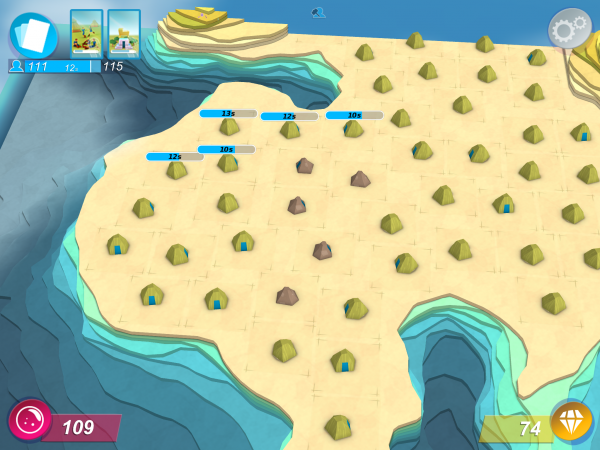 Because Godus’ focus is so heavily on the building of more, and more, and more stuff, after a while the game also starts to look like something that has the makings of a powerful environmental message. The core mechanics force players to ruin landscapes filled with lush forests and soaring mountains in order to create habitable “flat” portions of land to fuel a growing population. Because Godus is so beautiful you as the player are forced to ruin its best feature in order to progress.

Now I am certain beyond a shadow of a doubt that Molyneux was making a commentary about environmentalism and overpopulation in this, but his ideas are ruined by the freaking free-to-play model. Because business wisdom tells developers that if players are buying gems and stuff to make buildings there can be no way to “lose” the game or players will be offended that they’ve “wasted” their money, there’s no way to fail at Godus. And because you can’t fail at it, Molyneux’s clear desire to create a dark theme about human’s impact on the environment is a soft and ineffective one at best.

After a couple of dozen of these time-sapping buildings have been erected the game also starts presenting players with what are meant to be “moral choices” and the decisions that you make there are meant to affect how the civilisation develops, but again, there can be no “bad” endings in free-to-play games so there are no bad decisions that players can make. So as far as I can tell the effect these decisions have are minor indeed, and hardly the kind of mind and heart-wrenching decisions that players need to make in a game like in the Mass Effect Trilogy or Beyond: Two Souls where those decisions have real and meaningful impacts on the world around the character. 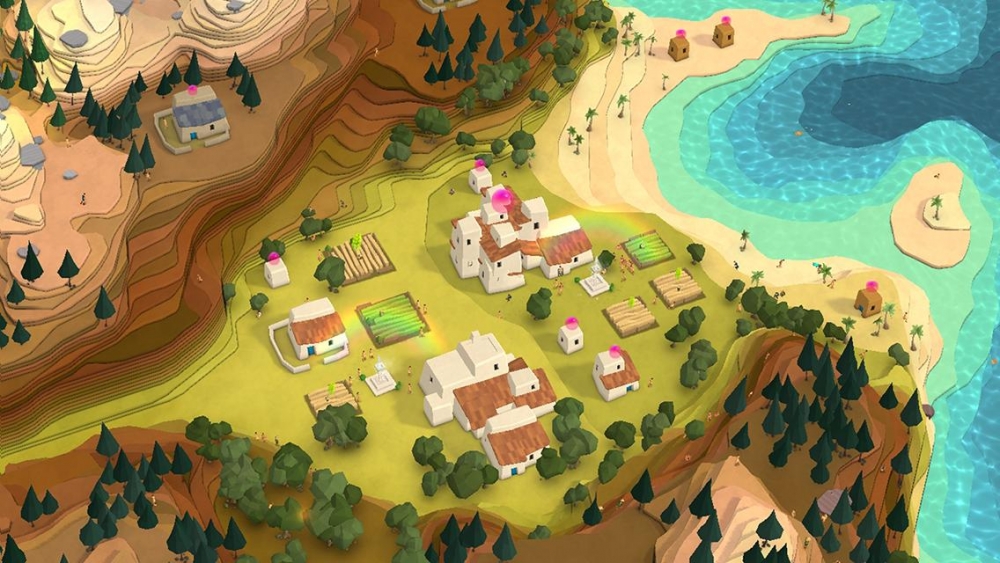 In terms of play, something like Ubisoft’s truly breathtaking From Dust is so much closer to the game that Populous fans should be playing. That game was a brilliant example of taking an old idea and polishing in it such a way that it makes sense for a modern player. But playing Godus is much closer to playing something like EA’s mobile Dungeon Keeper game; where the publisher has cynically taken something that fans loved, and then tried to ram it into a monetisation model that it was never developed for. It’s especially disappointing coming from Molyneux’s company, because he has been an outspoken critic of free-to-play models in the past.

As I mentioned in the introduction, I wouldn’t even be writing this review if this was just another Farmville clone from a nothing developer. I simply wouldn’t have downloaded it. But this is a game by Peter Molyneux who, for all his misfires in recent years, remains a guy who is fiercely intelligent and deeply committed to creative game development. The fact that he allowed this game to fall into such a cynical monetisation model shows just how enslaved developers and publishers have become to free-to-play games, and that makes Godus a symbol, but for reasons that Molyneux probably didn’t anticipate; it’s a symbol for just how infuriating free-to-play has become.