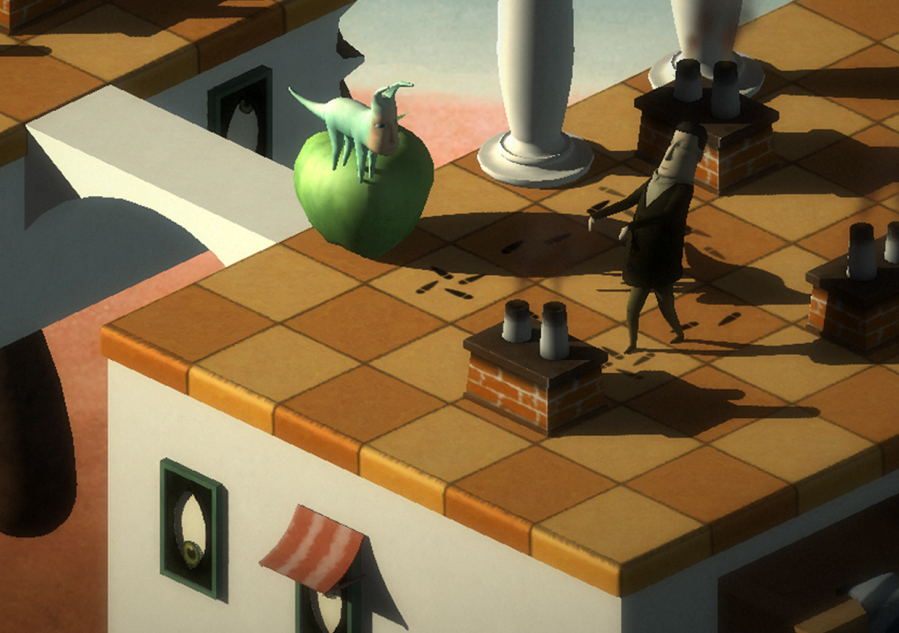 Who remembers the episode of The Simpsons in which Homer heads over to a chilli cookoff and consumes several ‘Guatemalan Insanity Peppers’, leading him to hallucinate and go on a vision quest in a surreal version of Springfield?

Though Homer’s quest was about finding his soul mate, the episode does share some visual similarities to Back to Bed, where a man suffering from narcolepsy finds himself sleep walking.

The surrealist style that the game offers played on my unconscious mind as I played, drawing on things that I have seen and done before in a very abstract manner. It throws standard surrealist tropes at players, such as Dali’s dripping clocks, and then mixes in other, seemingly random objects such flying chess pieces, pipes with big lips, cameras, and whale trains, which I liked to imagine would eventually transform into some kind of hybrid cat bus from Studio Ghibli’s classic animated film My Neighbour Totoro. There’s massive variety between levels too, as you’d expect from a surrealist game. For instance, the first world is themed towards cityscapes while the second is more nautical with a beachy aesthetic. 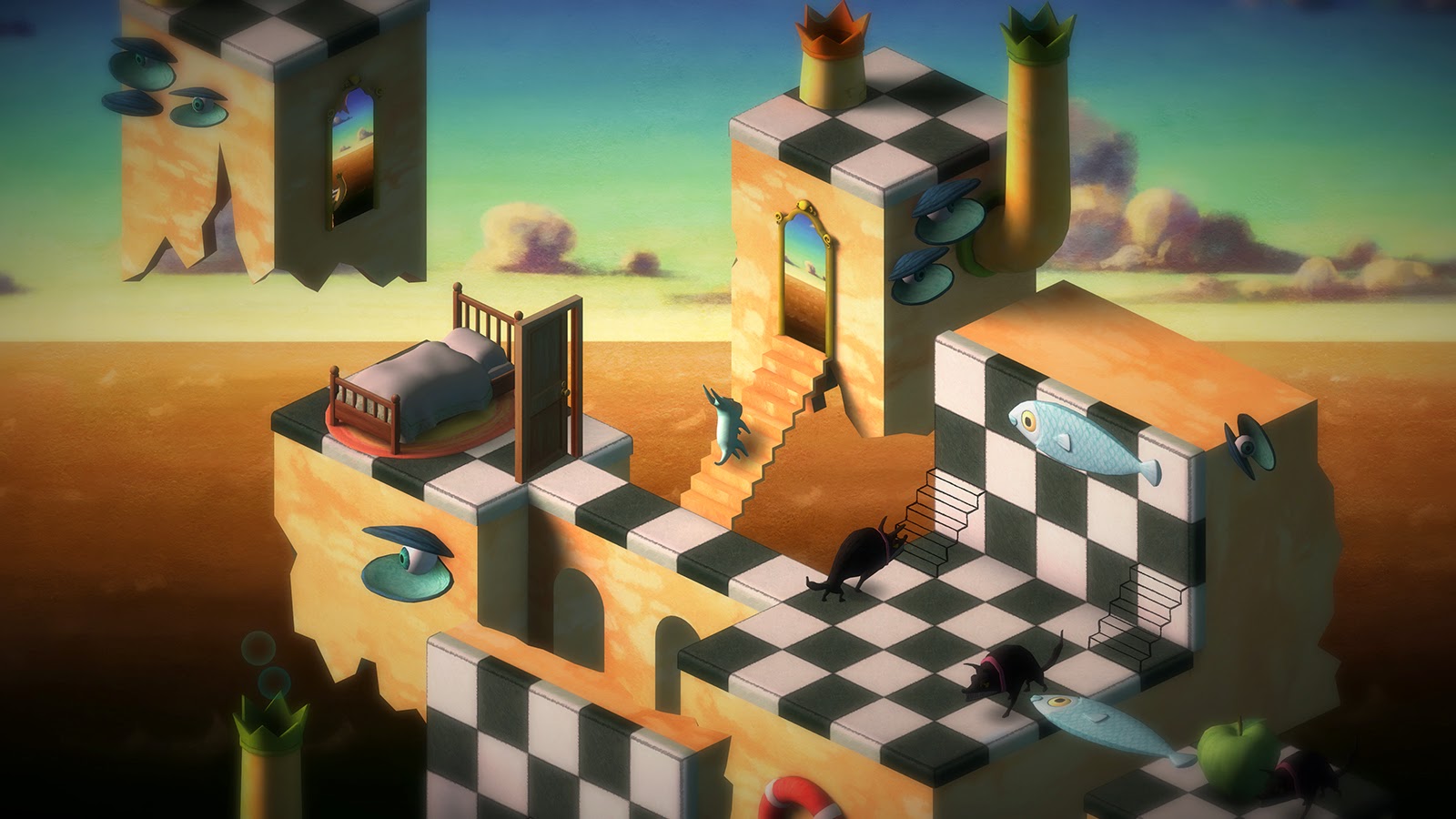 Surrealism leads itself well to a game about the unconscious mind and dreams. The mind in a dream is never quite right – it distorts and magnifies certain objects while injecting symbolism and constructing objects you would never remember having seen before yet somehow manages to be familiar. This concept has translated into creative freedom that has allowed the developers to play with environments. In addition to the surrealist themes, Back to Bed is also inspired by the works of M.C. Esher and his optical illusions, with these impossible objects being built into the level design.

Back to Bed gives players control over Subob, the narcoleptic Bob’s unconscious mind reincarnated as a creature that places objects on a grid-like level to affect how Bob moves. The goal is to lead him back to his bed. Bob sleep walks in a straight line until he bumps into something, at which point he then turns counter-clockwise. If Bob doesn’t hit any object he will continue to walk until he falls off the level, and there are enemies scattered around the levels as well which can cause Bob further nightmares.

There are four enemies in the game. First up are alarm clocks which walk in an outlined path which can be manipulated to walk off the edge by placing an apple near them. There are also dogs which behave in a similar way however don’t seem to be able to be persuaded to walk off the edge of the map. The game also has a floor creature which sucks Bob into a whirlpool, and a whale train which hits Bob head on to wake him up in the most unpleasant way possible. 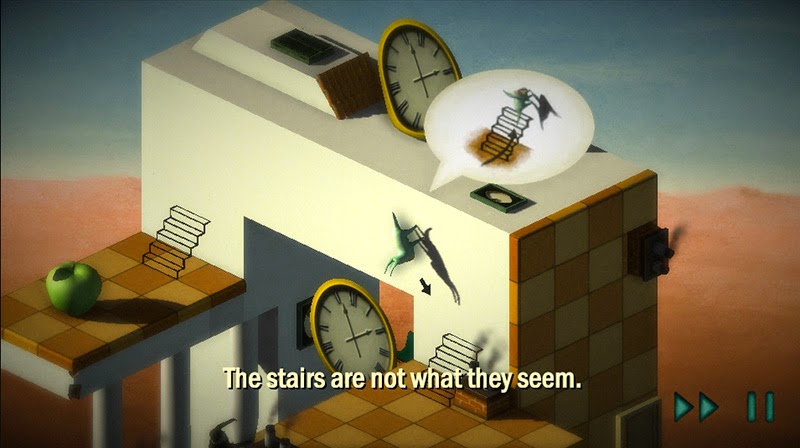 The levels often place the movable objects on a different dimensional plane, which is accessible only to Subob. Subob has two primary objects at his disposal: a bright green apple that Bob can hit causing him to change direction and a board that is engraved with a fish pattern and can act as a bridge. There are also environmental objects which aid Bob such as paintings he can use to teleport around the place and pipes that blast out air and can push Bob to a different location.

The puzzles are hard enough that I would get stumped occasionally, but usually easy enough to figure out before they became frustrating. Back to Bed features around 30 levels in which players can control Bob through his slumber. Completing the base game unlocks Nightmare mode, which adds extra challenge to the existing levels by requiring players to also figure out how to obtain a key to open the door to Bob’s bedroom before being able to reach his bed. Often there will even be multiple keys in this mode, and they require players to drastically change how they approach each stage.

While this means in total the game offers 60 puzzles I felt while playing it that I could play it for much longer – there was a lot of room for the developers to come up with more puzzles. That being said, thanks to the game’s narrative being told through cut scenes that do break with the action, I don’t think there was room to expand on the levels without compromising the quality of the narrative by adding in unnecessary padding. Perhaps we can get more content in a sequel.