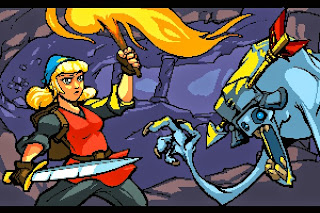 Roguelikes are a pet favourite genre for many of our team at DDNet. We’re also quite fond of the rhythm game genre too. But what, oh what, would possibly happen if these two genres collided? Indie studio Brace Yourself Games has done the unthinkable and tackled this precise question. On paper, this might seem like an epic tragedy just waiting to happen, but this hardcore dungeon crawling (roguelike) rhythm game is shaping up to be awesome. It’s not even completed yet and it’s awesome.

So how exactly does a roguelike play in rhythm game format? Quite simply, in fact. The four arrow buttons on the keyboard are all that’s needed to play the game. Famed electronica composer Danny Baranowsky – known for his work on Super Meat Boy, Canabalt and The Binding of Isaac – has produced a thumping electronic soundtrack that gives the game a heartbeat, and tapping the directional arrows to the game’s beat moves the protagonist around the tiles of the dungeons. Isn’t there supposed to be an attack button? Maybe in other roguelike games, but not this one. To take down the fearsome beast within these rhythmic crypts, one must learn to dance.

Quick, someone call Syrio Forel! Oh, wait, there’s no water dancing to be had here. Sorry. Don’t fret though, because the dancing here is just as exciting and every bit as deadly. At the game’s onset, simply hopping into an enemy will land a kill, but the enemies are constantly moving around to the beat as well. A common rule for most all enemy types is that if the enemy and the player hop to the same square simultaneously, the player will lose hit points. There are visual clues to take note of: skeletons raise their arms one beat prior to hopping two squares forward, which the player cannot be in the path of without penalty, and large enemy types, like the Minotaur, lean forward before charging at the player. For enemies that don’t give off visual cues, they have noticeable movement patterns and the combination of both of these allow for strategic attacking preparations to be made. Learning them is absolutely paramount to digging deeper into the crypts; otherwise, there will be yet another set of bones left to mindlessly dance to the beat. 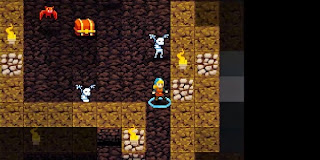 There is a hitch though. A clever combo system that multiplies the in-game coin multiplier rate along with successive steps to the beat finds frantic situations where the player is tasked with constantly moving, yet needing to think strategically to not only defeat, but survive large enemy hordes. Throw in a large enemy type into the mix and these situations can be downright terrifying the first time they are encountered, especially when deeper into the crypts where the tempo is greatly increased. Each level has a store that can be accessed to purchase new items, weapons and even spells that can be quickly used via alternations of two simultaneous presses of the arrow keys, which must be done in time to the beat to retain the combo multiplier, of course. Whether it’s a bit of needed life, a new set of armour or a one-time use freeze spell for those nasty hordes, being able to purchase these items always grants a bit of momentary relief. It all can be a bit overwhelming at times, hectic in others, but through it all, it’s just a whole lot of fun.

Another deviance from the typical roguelike formula is that there are permanent upgrades that can be purchased at the start of a new life with the rarely found gems hidden within the crypts. These can be powerful upgrades like additional hit points and coin multipliers, or new and better items that can be found within the crypts. Rogue Legacy players will feel right at home here. It should come as no surprise that scouring the levels for gems becomes quite the obsession.

Those looking for a real challenge will want to look no further than the Hardcore Mode, which throws away the keys the to permanent upgrades and brings on the real permadeath pain. There’s even a Seeded version of this mode that allows for custom levels to be created by entering in random words. Want to play a level created to my name, “Christopher”? Type it in upon starting the mode and let the dangerous dance begin. Once skills are honed to a tee, tackling the Daily Challenge dungeon is where the best of the best can truly show off their skills. Here, a new dungeon is created everyday and players only get one shot to rack up the highest score possible to boast on the online leaderboard. Not only can their leaderboard scores shine brightly, but their replays are just a mouse click away too. It’s a fantastic way to keep players coming back each day and breathes a bit of life into a game that revels itself in the land of the dead. And for those lucky folks whom have actual, living, friends around, they can also jump into some Local Co-Op too. 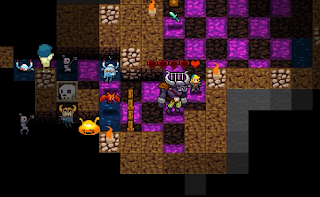 Phew. That’s all already in the game and working wonderfully; so much for being an early access preview. We’ve already got a game that deserves to be treated like a full release. Crypt of the NecroDancer is a crazily fun indie package that takes the roguelike and rhythm game genres on a collision course that’s headed straight for the crypts. It’s a frantic dance of strategy and quick wits combined, all wrapped up in a wonderful pixelated retro aesthetic. It’s already available is worth the price of entry, so there’s no reason not to go ahead and get this deadly dance party started.

The big games of September: Wow are you going to be busy