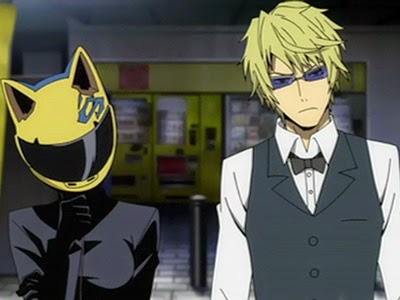 It’s been over four years since the anime adaptation of Ryōgo Narita’s Durarara!! finished airing, but fans won’t have to wait much longer to see the inevitible chaos of Ikebukuro’s zany residents unfold once again.

Durarara!!’s second season, now officially christened as Durarara!! x2, will begin in January alongside the rest of the winter 2015 lineup. It’s quite a fitting month for it to return, too, given that the first season began running on January 7th, 2010. The initial show previously ran for 25 episodes, though it remains to be seen what the episode count will be this time around.

The bulk of the original staff from director Takahiro Omori to writer Noboru Takagi have been confirmed as returning. The key difference, though, is that animation studio Brain’s Base has been swapped for Studio Shuka.

The original light novel recently concluded after ten years and 13 volumes, so there’s certainly room for the creators to incorporate material from there as they see fit. The previous season was a loose adaptation of the first three light novels before ultimately weaving its own path, so it should be interesting to see what direction the animated series heads now.

The first season is currently available on Crunchyroll in most regions, meaning there’s still ample time for those who missed out to catch up before the sequel airs.