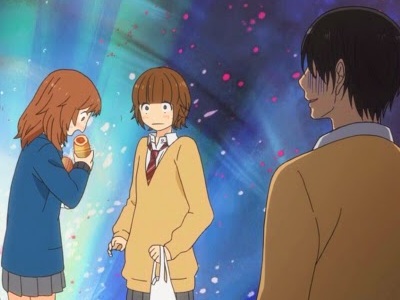 Oftentimes when childhood friends reunite in an anime, at least one party has changed to a comedic degree. Blue Spring Ride (Ao Haru Ride) takes a more realistic approach to the situation, however. While its plot is obviously embellished to flow well and elicit emotional responses from the audience, there’s a distinct even-handedness being established so far.
The story revolves around protagonist Yoshioka Futaba and her unceremonious reunion with childhood friend, Mabuchi Kō. Instead of magically meeting on the first day of high school, the two don’t attend the same classes and Futuba even doesn’t register Kō’s presence for months thanks to his longer hairstyle. Considering the whopping dimensions of many high schools and student density, this is actually rather feasible. And sure enough, once the two reunite, they begin to notice each other everywhere.
Following their awkward reminiscing, it’s established that neither Kō nor Futaba have greatly discarded their former personas. Futaba is occupied with keeping up appearances and creating a quirky persona to fit in, but she’s very much a natural development of her former self – just slightly repressed. Meanwhile, Kō has become somewhat jaded and cynical as a result of his parents’ messy divorce, but he demonstrates the same assertive kindness he did in middle school. 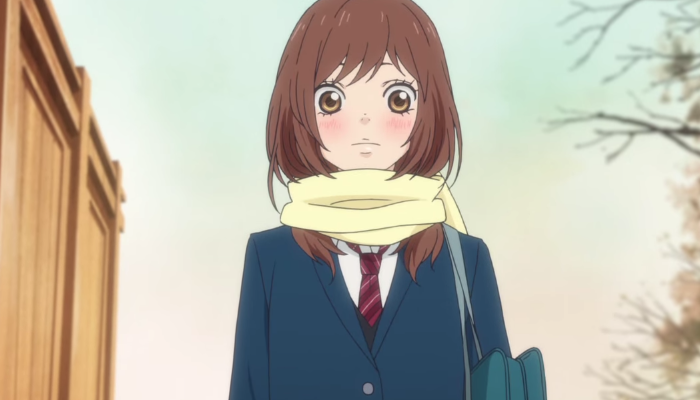 The traits of their former selves are not erased but instead understated or veiled. We’re frequently shown flashbacks that compare and contrast the behaviour of both Kō and Futaba’s past actions. These scenes can get away with being a tad hokey, too, because most elementary students do indeed experience their fair share of drama.
The first couple of episodes center on Kō passively improving Futaba’s life and tangible results are already being shown. She’s ditched her “friends” in favour of a single outcast she can actually relate to and is actively seeking more by becoming a member of the student council (despite immense initial resistance). I imagine Futaba will end up assisting Kō in turn as he gradually divulges on the chequered past that caused his family name to change since the pair’s middle school escapades. At the very least, he doesn’t strike me as being the usual knight in shining armour male as he’s got plenty of his own struggles afoot. 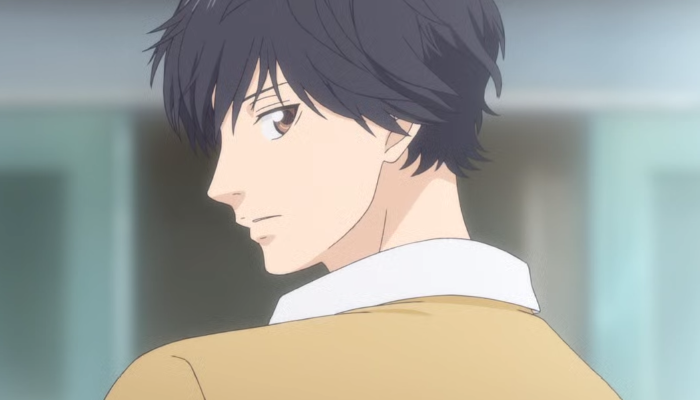 The one aspect that irks me is at the moment is the frequency of Futaba’s waterworks. I’m aware tears are supposed to convey intense emotion and that students can be quite volatile in the jungle that is high school, but our central protagonist has turned on the proverbial tap half a dozen times in the first three episodes (often publicly, no less). I’m alright with this when it’s used for comedic purposes, but when played straight, it begins to feel like a storytelling crutch designed to wring sympathy from viewers. To Blue Spring Ride’s credit, though, it makes actual storyline use of her tears in one episode. I’m not prepared to dismiss its approach just yet, in other words.
So far, Blue Spring Ride has taken a somewhat tepid premise and executed it marvellously. The frequent flashbacks are legitimately interesting and both main characters are already undergoing both subtle and overt transformations.