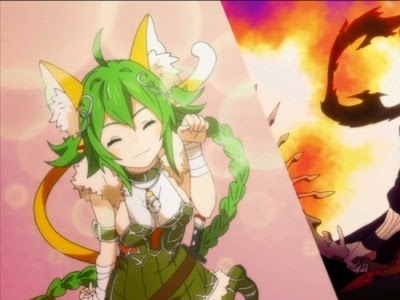 Sega’s free-to-play JRPG/card game hybrid, Chain Chronicle, has been going strong for a solid year in Japan on both iOS and Android. As of late June, the game racked up somewhere in the ballpark of a whopping $72 million USD for its miscellaneous purchasable content. The IP may well be poised to soar to even loftier heights thanks to the announcement of an anime adaptation.

Takeshi Mori of The Skull Man fame will be directing the show. As well, you can look forward to performances from voice actors Akira Ishida, Maaya Uchida, Ayane Sakura, Junichi Yanagita, Kotori Koiwai, and Shiori Mikami, all of which have been involved in various recent shows ranging from Is the Order a Rabbit? to Attack on Titan.

To those concerned about plot, there is indeed some storyline potential given the game’s use of narrative and a chapter structure. How the anime will actually use this or expand upon it is anyone’s guess, however.

It’s unknown how many episodes the show is going to run for yet, but Sega revealed that it will be “short”. Sega also promised to provide further details such as broadcast information as soon as possible.

It’s hard to gauge whether a streaming website will pick up the license in time for an English simulcast, but it’s at least worth noting the game it’s based on is being localised for various worldwide audiences in the near future. Regardless of the show’s potential availability, feel free to check out a couple more screenshots here.