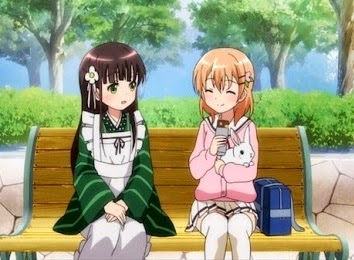 Is the Order a Rabbit? (Gochuumon wa Usagi Desu ka?) is a cute anime about cute girls who do cute things. It takes place in a cute town at a cute café that has a cute bunny as a mascot. These cute girls interact with each other in cute ways and all have cute names. After a cute intro, a cute opening song plays and is followed by cute background music and a cute ending theme. It’s…cute.

That sums up the show in its entirety thus far. It knows it’s aimed squarely at fans of moe and has no need to put on a façade. The main cast is entirely female and each one is about as archetypal as they come, from the token tsundere to the enthusiastic ditz. All of their names are puns based on a café menu and have varying degrees of subtlety (the main character, Hoto Cocoa, representing the least wit, amusingly in fitting with her character). There’s the obligatory fan service too, but it’s executed in a manner that aims to be nonchalant rather than arousing.

The humour isn’t anything special in and of itself, but because of the innocent, peaceful tone, it’s able to draw you in regardless. There’s also something rather refreshing about the music staying the same during comedic moments as it suits the sincerity inherent in the slice of life genre. 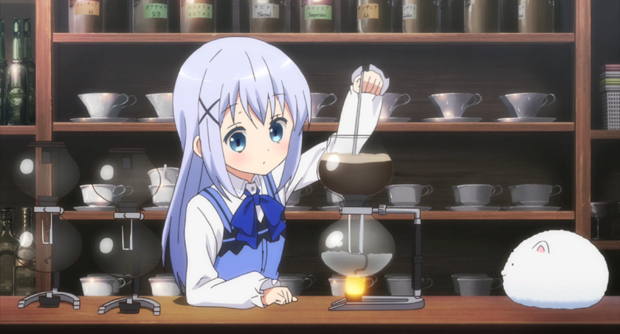 The only real facet that sets the show apart so far is its atmosphere, which is derived largely from the setting. We’ve seen many franchises have scenes in a café or in the workplace, but but with this anime the majority of the action goes down in one and there’s always something reasonably interesting happening. And when the characters do leave the café, there’s some exceedingly gorgeous European scenery heavily inspired by Venice.
The show’s value is proportional to the expectations of the viewer, really. If it continues down this route, I expect a dozen more episodes of rather disposable entertainment. I wouldn’t mind seeing the premise’s scope broaden somewhat as there are a few mysteries lingering in the background, but this is a slice of life comedy and they’re not likely to be world-changing revelations – just charming hooks to keep you invested in the (ahem) cute girls. I suspect most pursuing it for the moe brand of charm won’t particularly mind either way.
Is the Order a Rabbit? is acceptable for the sugary cup of Joe that it is. It’s just hard to get too enthused about the same plain taste when this season’s menu is also dishing up refined flavours like Kilimanjaro.
You can watch the show here.
– Clark A.
Anime Editor
Email me at: clarka@digitallydownloaded.net
Share this