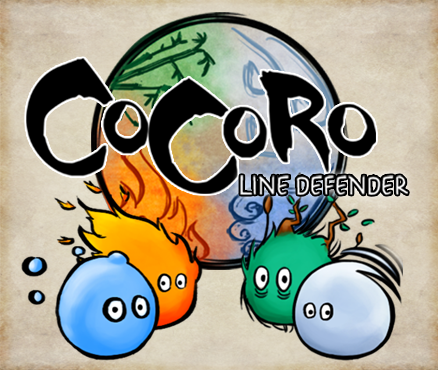 Going into the wonderful water-coloured world of Cocoro I expected a wonderful and light experience. What I got however was a hardcore, brutally unforgiving experience.

Cocoro: Line Defender does a great job of using the two screens of the 3DS. Units are sent from the base of operations on the lower screen, and pop out onto the two dimensional field on the screen above.

Once a unit is ready for use, the player to use the stylus to pick up said unit and throw him outside, and because the base can only hold four units at once, players need to keep close attention to what’s going on there. If more than four units are present than production of more comes to a standstill which can also be the difference between victory and defeat. At first I played thinking that I just needed to nudge them put the front door, but then things got really interesting when I realised that harder I threw, the further the unit will fly towards the enemy. And then I got too eager lost a few units as they went over the enemy base and off the map. Sorry guys…

There are four levels of units available. Each unit level requires a certain amount of time to spawn which increases drastically from one level to the next, and deciding if it’s worth one stronger unit or a slew of weaker ones can often be a hard choice to make. Below the unit selectors are the types of weapons that can be equipped by a unit when it is spawned. Weapons exist in multiple varieties enabling units to attack from close, medium, and long ranges. Weapons can be upgraded for an ever-increasing cost which is obtained in the form of a score at the successful end of a level. These weapon upgrades are required from a very early point as the level of difficulty ramps up rather quickly and can be rather jarring at first. There is one ability that can help turn the tides but it should be used very sparingly as it can eliminate all forces within sight. 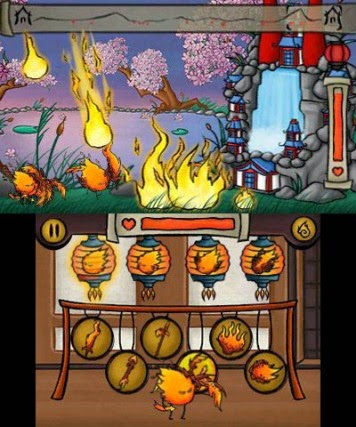 Where Cocoro can fall a bit short is that between missions there is not very much to do. Options are limited to selecting the next level, viewing the units types, and performing upgrades to the weapons currently available. There is no ability to go back and replay a level to perhaps add a few extra points into another style of weapon to try to balance the scales. As mentioned with the weapons, the difficulty is rather steep and there can be several defeats or restarts in a row in order to figure out exactly how you should proceed to victory. The game is also poor at providing information to players; there aren’t even health bars over units to see exactly how much damage each of your units will do to your opponent’s.

The story is also a bit disappointing as the gorgeous visual style should have been backed up by something special. Events are told from the various Yoko, the protectors of the founding elemental entities, via speech bubbles between each stage. It’s not that well written, it’s poorly paced (with important conversations broken up by entire levels), and it’s not especially inspiring as a result. There’s plenty of potential in the world, but it’s going to need a new game or two to realise that potential.

Cocoro is a difficult line defence title that might turn a lot of people away from it because the sheer difficulty doesn’t gel with the art style.