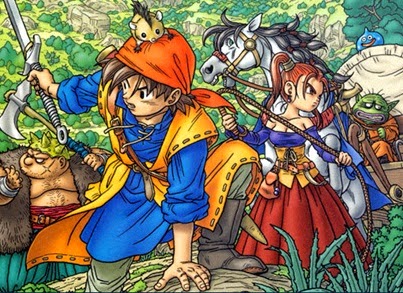 There is a classical beauty about Dragon Quest games. Square Enix’s venerable franchise has remained resolutely traditional throughout its long history, even as its stablemate, Final Fantasy, has taken some risks and offended some people in the process.

Because the Dragon Quest games have always adhered so closely to the classic JRPG formula, they have always been a reliably entertaining way to spend a couple of dozen hours to play through. These games are never essential, but once you start playing them it’s impossible to put them down.

Dragon Quest VIII, original released on the PlayStation 2, is considered by many to be the epitome of the franchise. It successfully combined the power of the console to realise the brilliance of artist Akira Toriyama, with the classic grind-and-loot turn based combat that was so comfortably familiar. The result was a sprawling, epic world to explore, filled with characteristically amusing characters, adorable slimes, and a brilliant soundtrack to put the finishing touches to true entertainment. 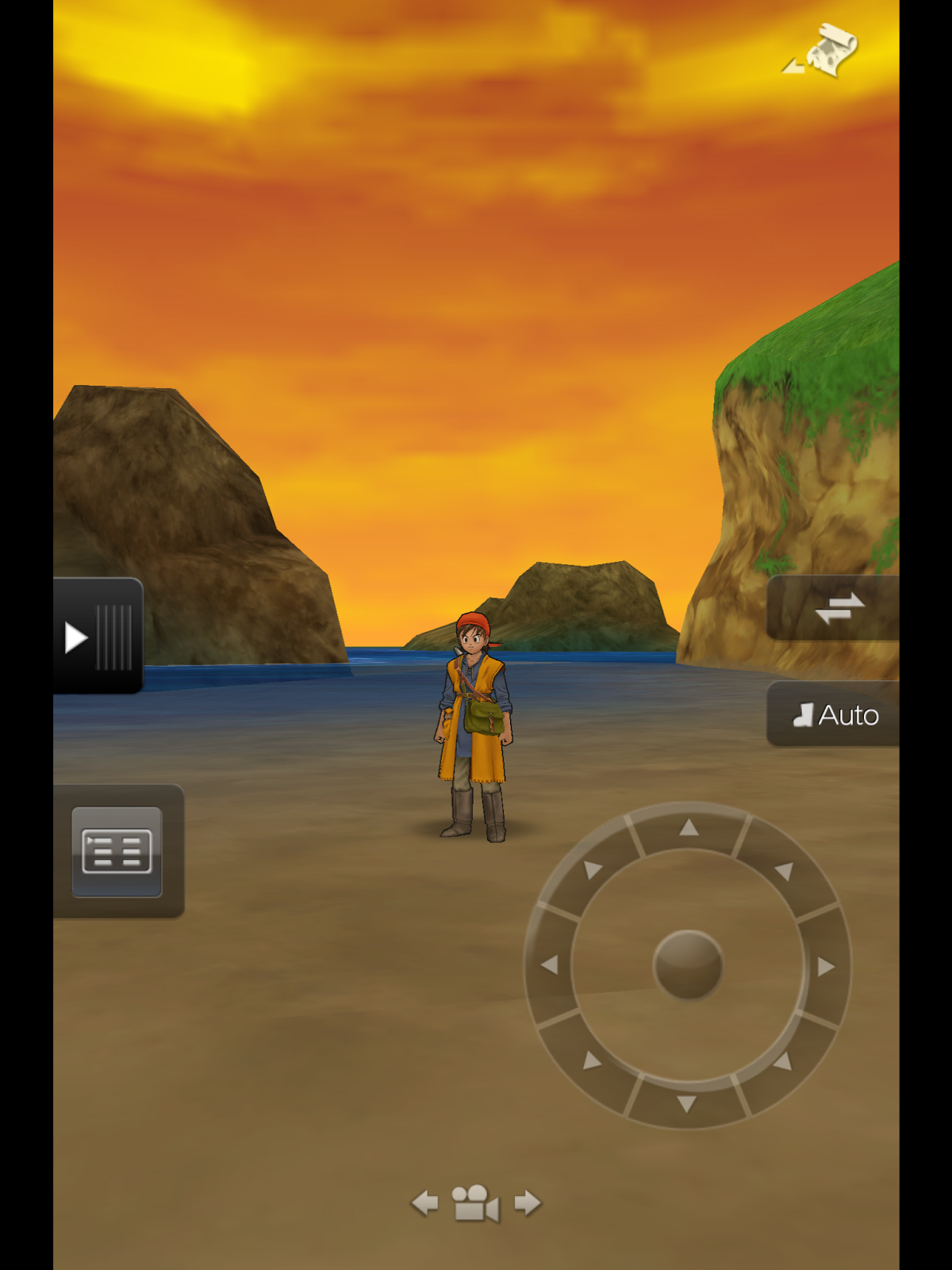 And now this legendary game is available on iPad. It doesn’t get on to the platform without some hitches along the way, but it does succeed in being the finest JRPG on the platform to date.

The biggest issue that this port faces is immediately obvious – the only way to play Dragon Quest VIII on iPad is with the device in a portrait orientation (the device is longer vertically than horizontally). There’s a reason that we tend to watch movies and play games in a landscape orientation – the human eyes, set next to one another as they are, are more comfortable at looking at objects in a wide viewpoint than a long one.

Dragon Quest VIII is downright confusing at first. A lot of screen space is wasted on stuff we don’t need to see (such as the sky), and we need to pan the camera around the environment a lot more than we would otherwise need to in order to take in a full panoramic view to spot hidden treasure chests. I have to assume that this device orientation was done for a specific reason (perhaps to optimise the controls for playing on phones), but on the iPad it’s ridiculous that we don’t even have the option to play the game in landscape. With that said after a few hours of acclimatising I was comfortable enough with playing the game in that portrait orientation. The virtual controls are handled very well and I found navigating the world to be no issue whatsoever. I even started to enjoy the portrait orientation in cut scenes and the like, as the characters looked large and suitably impressive on the screen when nattering on to one another.

I ran into my second issue with the game when I was reminded of just how frequently Dragon Quest games like to throw combat at players. Unlike Dragon Quest IX on the Nintendo DS where the various critters to fight were shown on the map and could often be avoided if the player so wished, VIII and earlier featured full and unavoidable random encounters, and they come frequently. Every couple of steps will bring a new fight, and this has some adverse impacts on the gameplay. Because difficult encounters of this regularity would make long dungeon crawls impossible, regular enemies are actually quite easy to defeat. The issue is that the constant and mindless break to the momentum of exploration can become frustrating, and lacks a sense of reward when there’s no real challenge.

The combat can become so tedious that if I was playing for long stints at a time, if I saw a treasure chest across a gap or through some bars, I wouldn’t bother figuring out how to reach it, as the additional combat wouldn’t be worth the time to go and track it down. 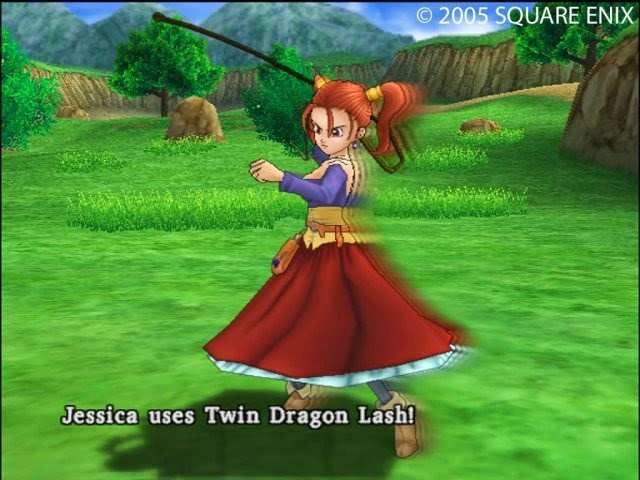 When the enemy groups are tougher (such as in boss battles), Dragon Quest VIII’s elegant combat system truly shines. Each character has a range of special abilities unique to them, and players have quite a lot of control in determining how these characters can develop. For instance, the main character can specialise in everything from swords to boomerangs, and each of these weapon specialistions bring their own strengths and weaknesses. Bringing together a party that’s able to effectively work together to defeat tough enemies is a lot of fun, and these battles more than make up for the random encounters along the way. In all my years playing JRPGs, I’ve never tired of Dragon Quest’s combat system. It can momentarily frustrate me certainly, but I always end up coming back for more with every new release. At a time where all the other JRPG franchises are competing with one another to figure out how to latch on to the modern attention-deficit FPS player, it’s both quaint and charming that this series, at least, doggedly preserves the foundations of the JRPG genre.

As you’d expect from a truly lengthy JRPG, the narrative of Dragon Quest VIII takes players to all kinds of exotic towns, villages, and cities. While there’s an overarching plot that is really quite epic in scope, this franchise has always been good at keeping players engaged by presenting them with a sequence of smaller targets. Each new town features a localised situation where someone is in trouble and needs assistance. The party of heroes will need to delve into a dungeon to defeat a monster or rescue some kind of treasure, and they’ll then earn an award for their efforts in thanks and be set on the path to the next village.

Were Dragon Quest VIII to focus exclusively on the larger plot, it would lose players well before it got to the end. Because of these smaller objectives, players experience a new mini-plot with its own orientation, complication and resolution with each new location that they find, and these all then feed back into the main plot to remind people of what’s going on in a broader scale. It’s a masterful way of telling a linear JRPG story, and one that few other franchises do as well as this series. 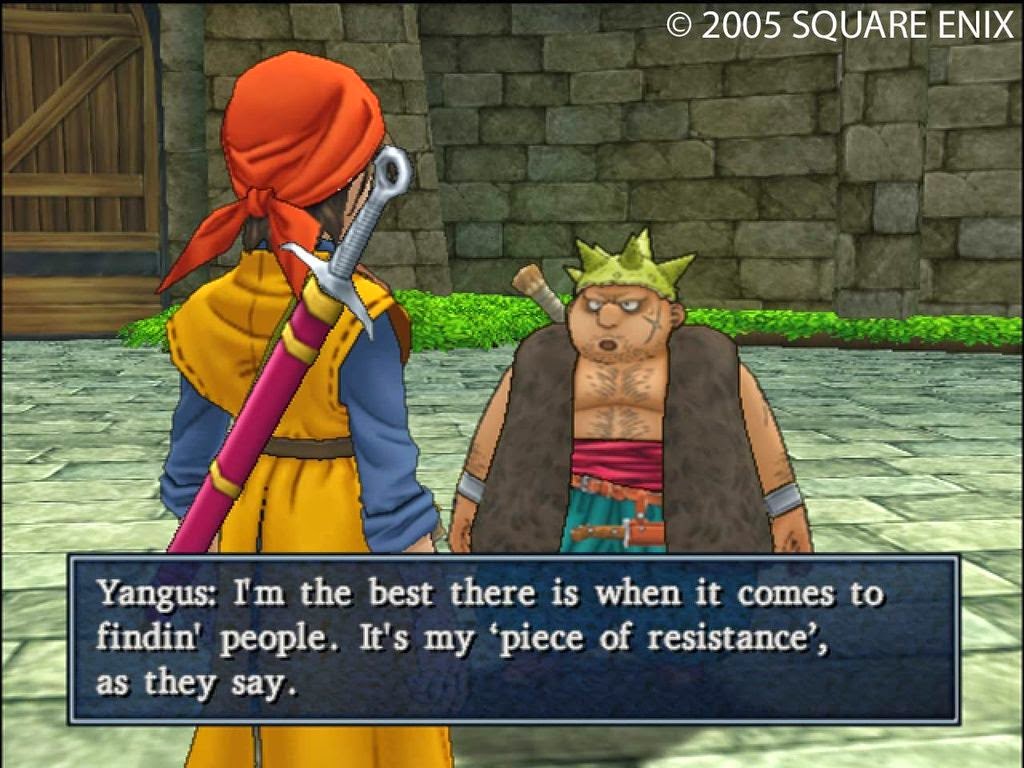 It also helps that every character has weird quirks and every monster is so charmingly designed. Dragon Quest has always been known for its sense of humour, and this is in full flight in this game. From the octopus boss called Kalamari to the COR BLIMEY puns that one of the characters throws out at regularly right through to a very inspired bar fight, Dragon Quest VIII lays on the humour thick and fast. This is one of those few JRPGs where you’ll want to read every line of dialogue with every inconsequential character in a town, just to see what insanity the developers had come up with for that personality.

It is that sense of fun and humour that has perhaps meant that Dragon Quest VIII gets away with being so traditional. Focused as it is on simply giving players a good time, Dragon Quest VIII enjoys an X-factor quality and remains fun on the iPad despite the very odd choice to force players to play the game on an odd and uncomfortable device orientation.

World of Tanks on iOS launches globally on June 26