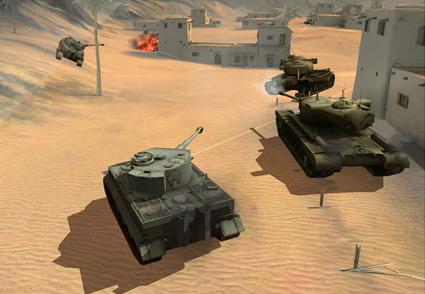 One of the most popular free-to-play games going around at the moment is World of Tanks. It was ultra-popular when it launched on PC some time ago, and the recent port to the Xbox 360 has proven to be a success as well.

There’s good reason that it is so popular – it’s a genuinely good quality game. There’s free-to-play mechanics at work of course, but the core tank action manages to be both engaging and tactical, making for one of those rare shooters that will appeal to a broad audience, rather than twitch-fanatic competitive gamers.

Now World of Tanks has its sights set on mobile devices, and the also free-to-play World of Tanks Blitz will land on iPads and iPhones around the world on June 26.

This game is somewhat limited compared to its console and PC brothers – the most number of tanks that can duke it out are 7 x 7. That aside, there’s over 90 tanks that can be unlocked and upgraded, and no doubt the developer, Wargaming.net, has plans to bring more content to the game in the future.

So it’s safe to bet that if you’re an iOS gamer and into competitive multiplayer, this one will end up being right up there with the finest options on the platform.