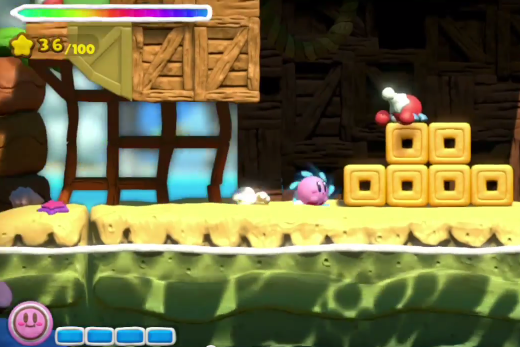 Between all Sony’s, Microsoft’s, and Nintendo’s own announcements, Kirby and the Rainbow Curse is one of those games that may well go forgotten despite coming directly from one of console gaming’s big three companies. If your tastes are anything like mine, though, Kirby’s brief announcement couldn’t be more thrilling.

Way back in 2005 when there wasn’t much else to play on the Nintendo DS and the casual audience hadn’t quite bitten yet, Kirby Canvas Curse (or Kirby Power Paintbrush to some of you) was one of the absolute best titles available. It took the handheld’s still-unproven touch screen technology and fashioned a very original experience out of it without feeling like a pointless gimmick.

This game looks to be a competent sequel, relying similarly on the Game Pad’s touch screen and trading in Kirby’s classic look for a decidedly more clay-like aesthetic. Some new features have been thrown in as well and it looks as if those vehicle segments from Kirby’s Epic Yarn are making a return.

Kirby and the Rainbow Curse is due on Wii U at some point in 2015. If the game can conjure up even half the magic of its predecessor, we’re in for a good little game indeed.