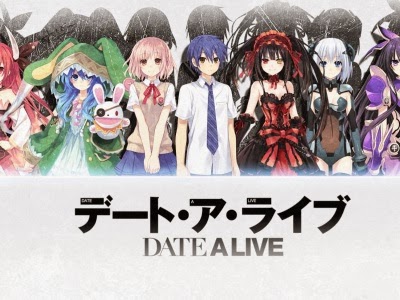 Disappointed that the second season of Date a Live only ran for ten episodes? Don’t despair just yet. Coinciding with the conclusion of the show’s second season (which just finished airing this week), it was announced via Date a Live’s official Twitter page that the show will be getting its own feature film on the big screen.

Whether the film will have an original plot or be a simple compression of the material in one or both seasons remains to be seen. No release date was given for the film either, but surely fans are glad the series is a live and well.

If you haven’t seen the show, here’s the synopsis of the series according to FUNimation:

“In a world devastated by mysterious spatial quakes, Shido isn’t what you’d expect in a hero. He’s an average Joe who gets bossed around by his adorable little sister and mocked by the popular girls at his school. You’d definitely pick him last for dodge ball, but when it comes to saving the planet from imminent destruction, Shido’s got one thing going for him: intergalactic hotties can’t keep their hands off him! When the secret to stopping the spatial quakes turns out to be romancing the extraterrestrial Spirits responsible for all the chaos, Shido the loveable loser becomes the hero of all humanity. For every Spirit he makes out with, mankind breathes a little bit easier. Kiss the girls – save the world. That name of the game is driving the space babes crazy, and nobody does it better than Shido!”

Or if that’s too absurd for your liking, just know this – boy protects earth from alien invaders by winning their affections. It may or may not be as silly as it sounds and more.

Kadokawa also released a reveal “trailer” via its YouTube channel, although admittedly there’s not a whole ton to get excited about in the less than twenty seconds (much less if your kanji is rusty).

If you missed out on the previous two seasons, the show is available on the streaming service provided by FUNimation. If you prefer your anime dubbed, of course, you can watch that via the recently released first season on Blu-ray and DVD.