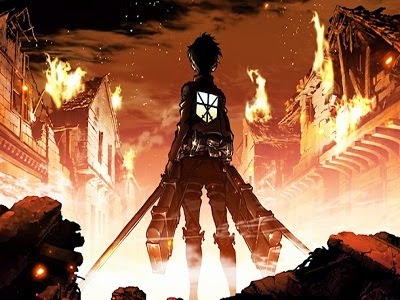 News by Clark A.
If Kill la Kill was 2013’s surprise hit, Attack on Titan (Shingeki no Kyojin) was the same year’s unstoppable behemoth. It reeled in all audiences from devout readers of the manga to those who couldn’t tell Dragon Ball apart from K-On!. The increased visibility of the franchise even helped the manga recently dethrone One Piece as number one on the Oricon comic sales chart (a feat no other series in the past five years can lay claim to).
With that in mind, it’s hard to imagine a more hotly anticipated release this summer for anime collectors. FUNimation was sufficiently fortuitous to snag the license for physical distribution of Attack on Titan and it looks to be taking advantage of that opportunity.
Two Collector’s Edition box sets will be available, the first of which features episodes 1 to 13 of the 25 episode series. Both the English dub and the original Japanese with subtitles are available on the disks. Countless goodies are thrown in, too, from special pins to a replica of Eren Jaeger’s necklace and an art book to name a few.
This first set recently went on sale at FUNimation’s online store and is listed for a MSRP of $128.98 USD, though as of this writing it’s being sold at a 25% discount.
You can check out the set below, fit for a giant.