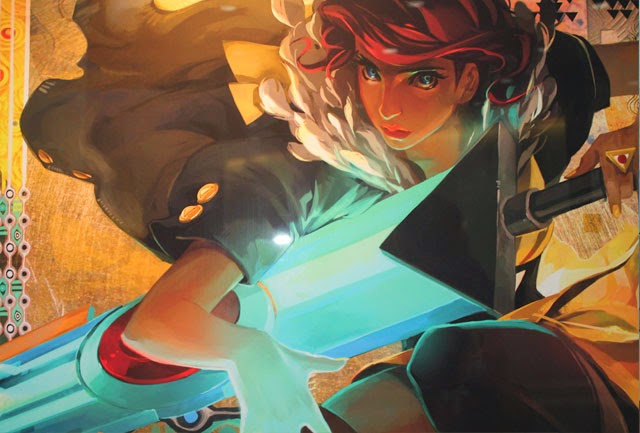 There’s a certain eloquence that hinges on Shakespearean tragedy intricately seamed into the fabric of Supergiant Games’ Transistor. The talented minds behind the critically acclaimed and wonderfully crafted Bastion have moulded together another beautiful world in a signature digital oil painting aesthetic.

What happens when a world goes cold? Dark, yet alluring, the utopian world of Cloudbank is intricately brushed to life with futuristic neon hazes and an opulent touch of Gothic architecture. In its opening moment, we find an oil painting depicting a beautiful woman with flowing red hair and pale skin, looking away from a man sitting in shadows with a futuristic computer chip-like great sword protruding from his chest. There’s no blood, instead there’s almost a sense of tranquility through the sorrow. Accented by the incredible lighting effects reflecting off her luxurious attire makes her seem, well… famous, possibly.

The glowing blue sword flickers and a man’s voice gently states: “Hey Red. We’re not going to get away with this – are we?” The camera pans back to the normal isometric view that the game is played in, and demonstrating a small white line and the word “Transistor” connecting to the sword in the man’s chest. Red moves forward, removing the sword and taking it into her possession. It flickers again: “There, together again.” I think this sword is talking to her! What is going on here?

Supergiant Games made the choice to self-publish Transistor and I didn’t fully understand the reasoning behind this until after I reached the game’s conclusion. Moving forward with this review, you will find only minor narrative descriptions. Like Bastion before it, Transistor’s strength isn’t found in its action-RPG elements alone, but in the way that its narrative unravels along with this fascinating and seductive city. Exploration and witnessing the events that are taking place here is the very essence of this title and I wouldn’t want to be the one that spoiled it. How deep you want to sink into the narrative and game play mechanics is completely left to the player. It’s a risky design approach to take. So much so that had Transistor not been self-published, I question if it would be the same as it is today.

It’s here that I’m reminded of Ken Levine’s underwater utopian paradise, Rapture, from the BioShock series. Rapture took players into another world that was familiar, yet distant; grandiose, yet fundamentally broken. Players could simply shoot their way through the game and see the game’s twisting narrative playout; or they could immerse themselves deeper by searching for details and experiment with the numerous complex combat options, unbounding the pages of Rapture and finding it to be, simply put: unforgettable. 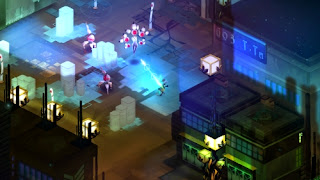 The parallels between Cloudbank and Rapture are apparent – Transistor’s compelling nature is found hidden within its finite details. Logan Cunningham’s superb voice-acting of the “Transistor” character throughout the game, not as a narrator (as he did with Bastion), is distinct in that he only comments on the actions taking place; never leading one forward, but constantly speaking his mind about the places traveled, people interacted with, etc.. It’s a fantastic way of captivating the player’s interest in the game world and one that works exceedingly well. OVC Terminals are randomly scattered about the city, and these allow denizens to take part in polls, as well as to inform the public on current events and news. Of course, things of this nature could be used to spread propaganda if put into the wrong hands. Rest assured, if this were to occur, Transistor would be sure to speak his mind. It’s also the small things easily missed that set the game apart, like small writing accents on interactive objects, like the aforementioned OVC Terminals. These short descriptive accents might cue you in on how many people were in a restaurant on a normal business day, or how many poll participants there were. Sometimes they can bring forth humour, yet other times, sorrow. These are minor details, but they always bring a reminder that Cloudbank was once alive and thriving.

So, what is going on here? That’s complicated, really. The world includes entities called Process, which are mechanised (that’s my best guess) autonomous creatures that are slowly eradicating the city and its denizens. There’s also a secretive organization known as the Camerata, a small band of notorious and hand selected individuals that have all recently erased themselves from society. Not only is there a nod to Ayn Rand’s Atlas Shrugged (or better yet, “John Galt”) to be found here, but her overall philosophical ideology of objectivism is beheld by this tight knit group of individuals. The game’s heroine, Red, was once a beloved famous pop vocalist before she became a target of the Camerata. They failed to take her, but they succeeded in taking her voice. Spoilers? I’ve only given the opening sequence. The Process and the Camerata, there’s got to be a connection there – right? In Cloudbank, just remember that everything isn’t always as it seems.

The Process put up a good fight too, creatively evolving the game’s action-RPG combat system alongside the game’s narrative. Periodically, the remains of key persons are found, leaving behind their trace. The Transistor acquires this trace and inherits a combat ability. For example, Red’s Crash() ability is the basic attack with the great sword and the Transistor’s Turn() ability grants the tactical ability to stop time and plan out attack patterns. Four abilities can be set in action slots to can be used in combat, and abilities can also be set into passive and upgrade slots as well. As each action is placed in different slots and utilised in combat, the Transistor will decipher additional backstory information on the person the trace is linked to. Reading this material is optional, but not only does it elaborate on the inner workings of the Camerata, it gives reason to explore the depths of the combat options that are available as well. What’s with the “()” after the ability names? Let’s just say that it’s yet another detail that sets this world apart from every other. 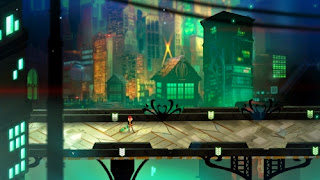 The depths that the combat options grow to is quite stunning, really. As more traces are acquired and additional slots are unlocked, numerous other possibilities are found. For instance, the penetrating long-range projectile Breach() weakens an enemy, allowing Crash() attacks to do significantly more damage thereafter if used in Turn(). You can also set explosive packets called Load() and then attack them with Crash() to damage multiple enemies at once. Even better, lower defenses with Void() before attacking with Load() and Crash()! There are limitations, however. Turn() has a limit bar and the more powerful the ability, the higher the usage cost. These limitations will find players devising their own sets of play styles, and constantly evolve them as new abilities are gained to try and survive these brutal attacks. As player levels are gained, Limiters can also be utilised to gain marginal increases in XP earnings at the cost of even greater difficulty spikes from The Process. The pain may not be worth the gain for everyone, but the choice to use them is completely up to the player. This unique blend of action and tactical RPG elements in one, along with the deep level of complexity, finds the combat to be enticing and addictive in its execution. It kept me coming back for more, even after the end credits rolled (hint, hint).

There’s a certain master stroke of genius to Transistor. It’s in the way that the city is elaborately dappled to life with dark colours at the onset, yet fades away into a white emptiness. It’s an almost Shakespearean-styled tragedy that slowly conjures up catharsis out of the hearts and emotions of its players, and collides with an intertwining of Ayn Rand’s ideas around objectivism. Many call Supergiant Games a video game developer, but not me. I call it an artist and Transistor is its work of art. It starts with a oil painting still, filled with beauty, intrigue and mystery. What would happen if you could step inside?