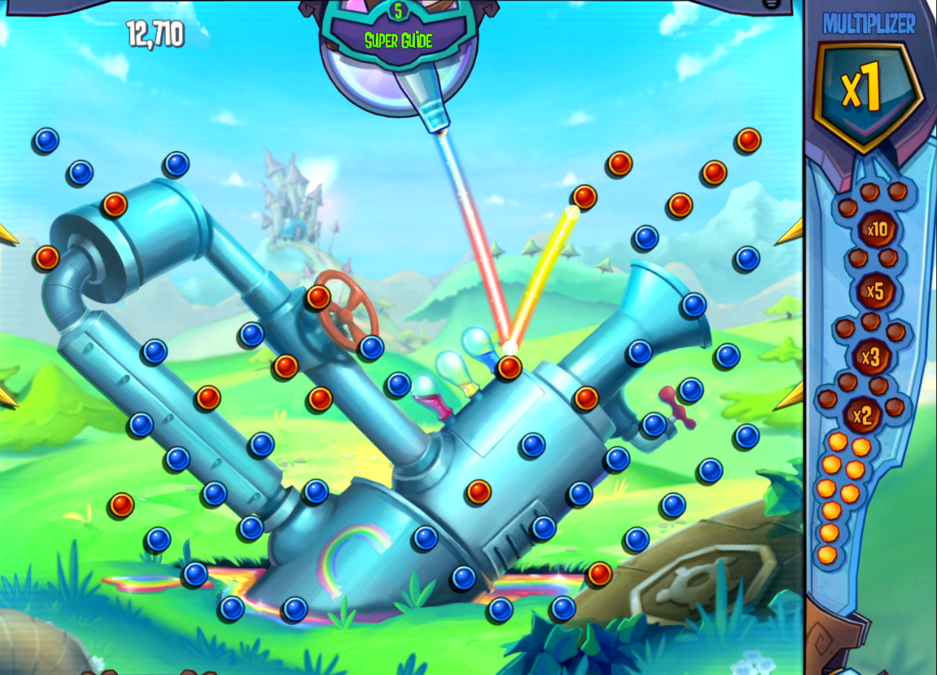 There’s always been a great sense of purity and simplicity to Popcap’s Peggle series, and it’s this feeling that has kept me coming back, year after year, to this odd mishmash of pachinko and pinball. In an era of free-to-play games and lengthy campaigns, Peggle is the perfect vacation from the very demanding world of gaming. Though you could ostensibly sink hours into it during a single session, Peggle is the perfect getaway; providing a more calm and enjoyable experience in small doses, perfect for a quick gaming session.

While it was a match made in heaven for mobile devices, Peggle 2 has returned, and this time it’s doubling down on consoles (and consoles only). Luckily, the transition to the big screen has been a successful one (for the most part).

(You can also check out our review for the Xbox One version, and its newly released DLC pack)
Despite the move to the big screens, Peggle 2 still relies on simple, yet tried-and-true mechanics. Each stage takes place on a board, with a different arrangements of orange and blue pegs. The goal of each stage is to clear all the orange pegs from the stage, which you do by firing a ball and having it collide with pegs, which clears them from the board (you begin each stage with 10 balls). 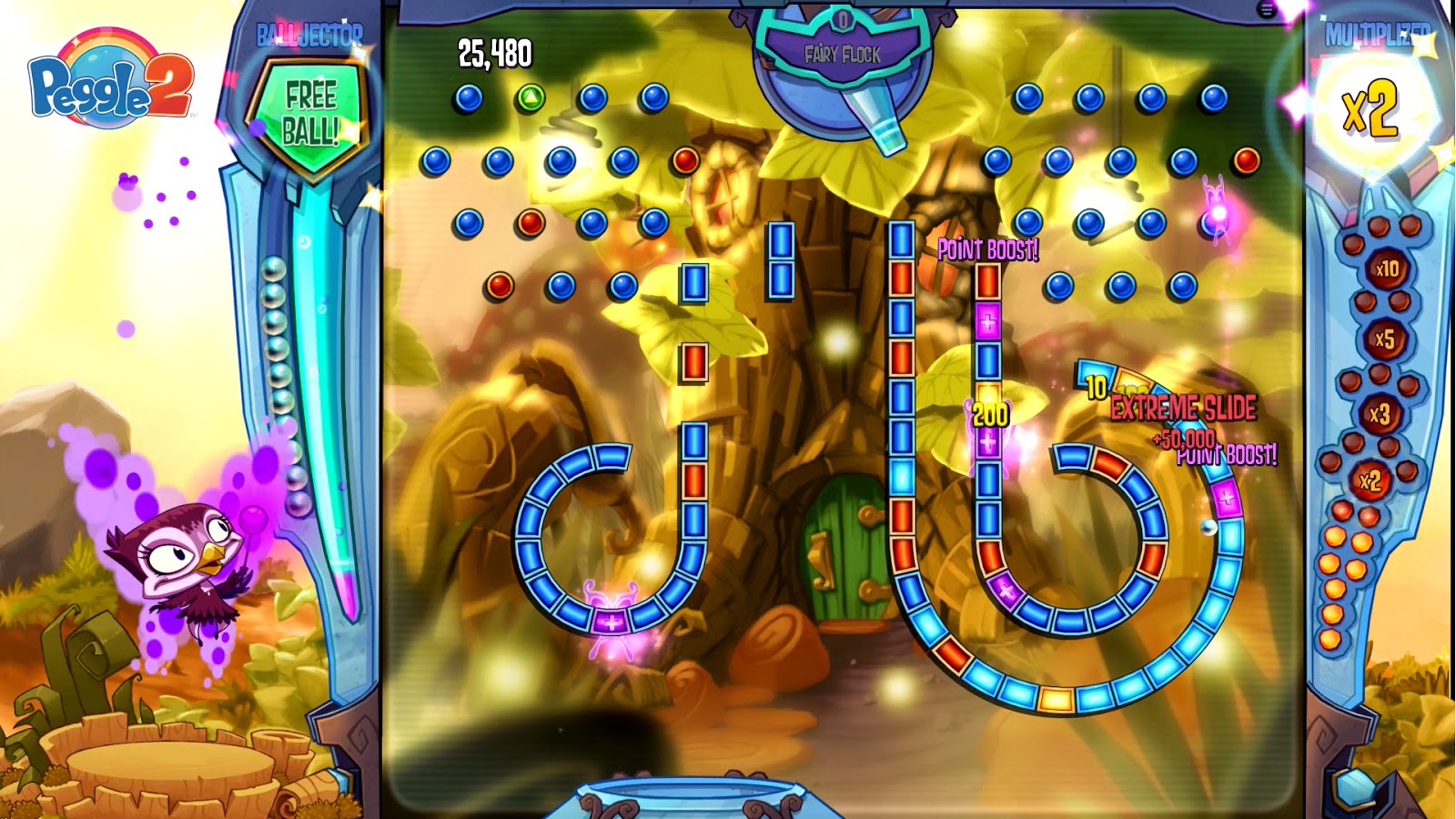 It sounds simple enough, but Popcap ups the ante by adding a few elements. For example, as you continue to clear the board of orange pegs, your score multiplier will continue to increase, allowing you to bank more points per shot. Banking enough points in a single shot (which can also be aided by the use of trick shots) can net you a free ball, though you can also do this by having landing your ball in the ball bucket at the bottom of the screen. In addition to score multipliers and trick shots, purple pegs add a huge boost to your score for one turn, and green pegs activate special abilities. It’s a great system, that adds a lot of depth to a fairly straightforward game.

Green pegs steal the show however. Hitting one activates different abilities, and there are a total of five different powerups; one for each of the game’s characters, dubbed ‘Peggle Masters’. Four of these characters are brand new, with Bjorn the unicorn returning from the first Peggle. Bjorn’s powerup, for example, provides players with a ‘super guide’ of sorts, mapping out in more detail how a ball will bounce once fired. Berg, the yeti, freezes the entire board, allowing pegs to slide around, knocking into more pegs in a potential chain reaction. But perhaps my favourite addition to the series is Jeff, the bridge troll, who is essentially a digital version of ‘The Dude’ from the “The Big Lebowski”, with a penchant for bowling and character quotes ripped straight from the Coen Bros.’ classic. 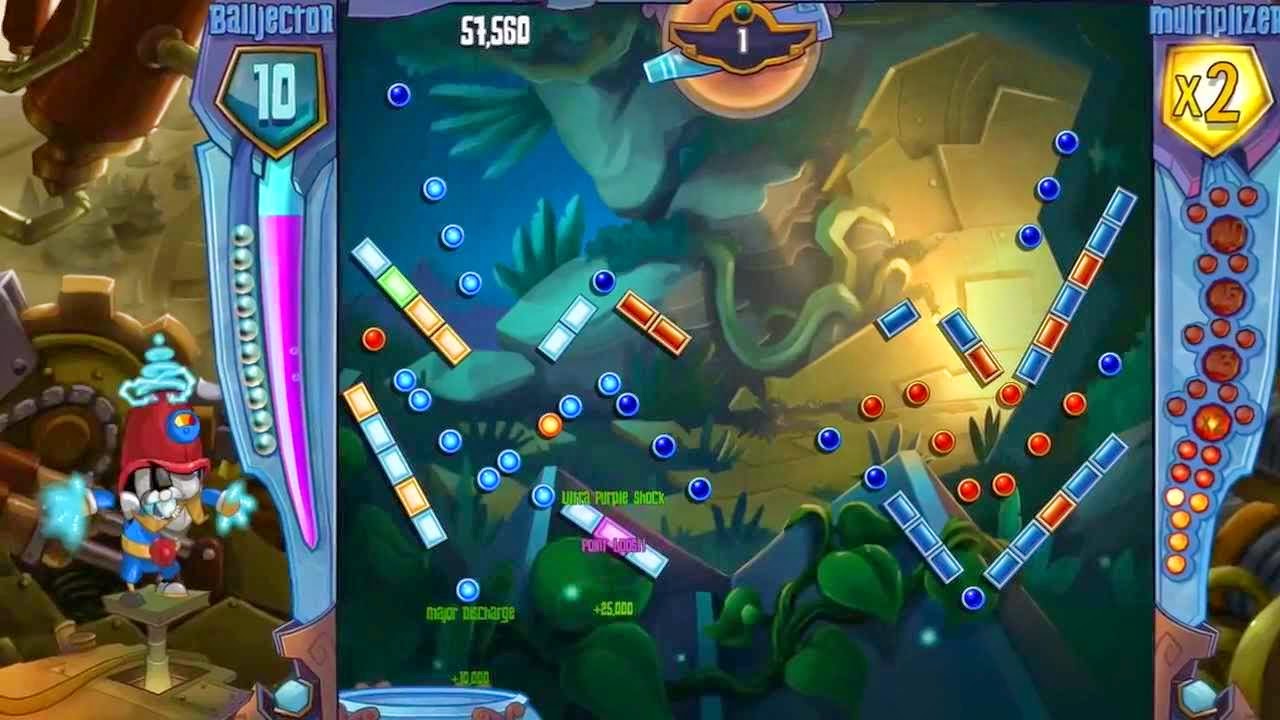 This is perhaps the most realized aspect of Peggle 2; while ‘Peggle masters’ were relegated to small portraits with few lines of dialogue in the first game, they have a much larger presence this time around. Cutscenes introduce each character, and they each have their own unique sounds, music, dialogue, and level artwork. Even the end-level music, which has traditionally been a rendition of “Ode to Joy”, is different for each ‘Peggle Master’ this time around. The only downside to all these additions is the distinct lack of returning characters. The original Peggle had a full cast of characters (ten in the core game, and a new one in the ‘Peggle Nights’ expansion); Peggle 2 rounds out at a somewhat disappointing total of five.

Still, some of that is made up for with the addition of challenges. Outside of simply clearing all the orange pegs from a board, each stage has three optional challenges, which range from beating a certain score, or completing a specific number of trick shots. Some challenges prove more difficult, with a few asking you to score under a certain score limit, or finishing a stage with a limited amount of balls. It’s an excellent way of rounding out the package, which includes 60 stages, and 60 additional skill-focused trials. And of course, there’s the multiplayer, which allows you to duel with another player by chipping away at the same board, or play with up to three other contenders as you play on your own versions of the same board, competing for the highest score. And to top it off, the much-requested leaderboards are now available.

In this day and age, it’s actually quite refreshing to see a game like Peggle 2 being released. As much as I am a fan of open-worlds and thrilling narratives, Peggle 2 offers a bright cheerful alternative to most of the games on the market today. You just have to be willing to give it a chance.