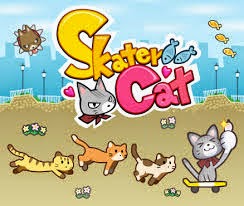 Skater Cat is one of those games that has a lot going for it but somewhere along the line it forgets to finish the basics. Making the overly simple endless runner style of gameplay an invigorating one often requires some ingenuity and Skater Cat aims for a formula with some ideas that are certainly uncommon. If only the developers had polished up the underlying concepts because by all means this game should be great.

Right out of the gate the game has a certain distinct charm thanks to its vibrant visuals and memorable music. It also doesn’t hurt that the protagonist is, as the title implies, a cat riding a skateboard (although its pun of a name, Ollie, might). Though the game is very much focused on speeding along from left to right, there are interesting mechanics such as the ability to gain momentum depending on the number of cats following behind you. In turn, this cat capacity is determined by how many fish you collect. It invites a very frantic pace as you try to collect everything in sight whilst steering clear of obstacles. It might not be the deepest premise but it’s conceptually sound and inviting to boot.
The problem is that this charm dissipates rather rapidly because of what Skater Cat squanders behind the scenes. Despite the game playing like a speed-based endless runner, the game is not one lengthy level but many split up into various separate worlds similar to a traditional platformer. In divvying up the experience however, it forgets the “rules” of a level-based structure. 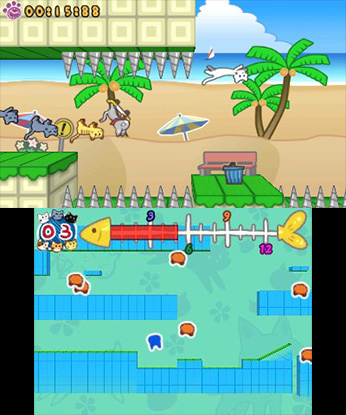 Though a stage will occasionally introduce a novel concept such as gravity switches, which allow the cat to traverse ceilings, these great ideas are quickly abandoned and dishearteningly underutilised. The stage designs also tend to be exceedingly simplistic, relying primarily on haphazardly placed pits and collectibles to just barely differentiate one level from the next. The backgrounds may change occasionally but there’s no real thematic consistency and a sole musical track accompanies them from start to finish, no matter what world you’re in.
The result is thirty levels that could objectively be called “different” but feel and play so similarly that there might as well only be a handful. Skater Cat could have been fairly successful as a pure endless runner or a more traditional platformer with fewer, better designed levels that took advantage of the rare gimmicks. Sadly, it’s an uncomfortable mesh of two kinds of game that is unable to truly benefit from either format. I can only speculate that the developers felt pressured to pad the game out to create the illusion that there’s a tonne of bang for your buck and, judging by some of the superfluous unlockable content, this seems to be the case.
The game also struggles at times due to one of portable gaming’s most prevalent adversaries: the screen size. Had the camera been zoomed out just a tad, it would be far more feasible to react in time to upcoming pits and obstacles. Instead, there’s occasionally some memorisation required to properly traverse a stage. The caveat is that levels are so short that this is relatively painless. 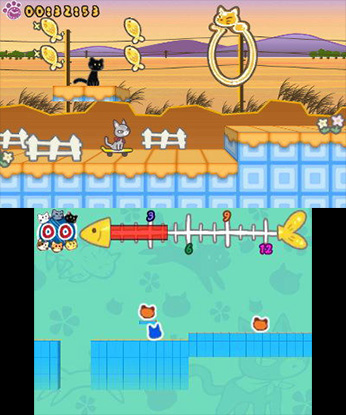 Because of the caring attention given to the aesthetics, Skater Cat is still a lot more fun than it should realistically be. When you’re booting along, hopping over trash cans, and picking up kittens to bolster your speed, the game has a flow to it that is the mark of good design. The controls, too, are rather tight and you’re given considerable control over Ollie to double jump and move around with less restriction than you’d expect.
I just wish the level design better lived up to its potential. Skater Cat is a charming, enthralling game inhibited by a bloated amount of lesser content that regrettably comprises most of the experience.