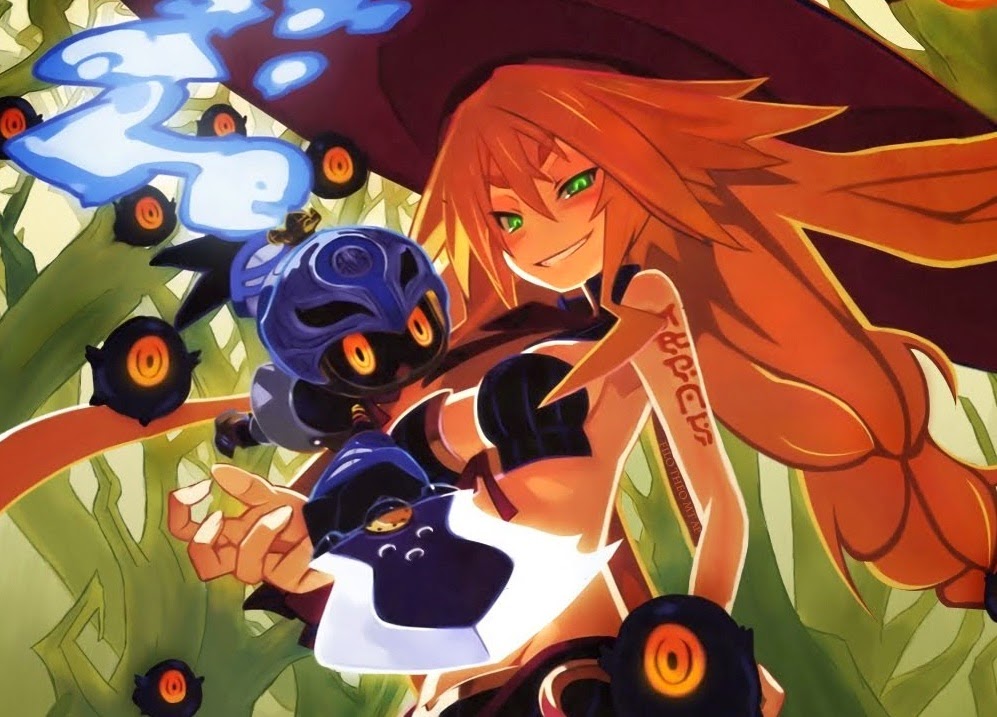 It must be a tough act to follow up the Disgaea games. That series of tactics JRPGs is so finely balanced, complex, and ultimately rewarding that any game made “from the same team as Disgaea” was always going to be exposed to some serious scrutiny from fans of the niche.

But The Witch and the Hundred Knight is not a tactics JRPG. It’s a very charming action adventure with a truly stunning art style. It’s not perfect, but it’s a truly enjoyable adventure.

What I didn’t expect going in was just how much it would remind me of a fairy tale or fable. In fact, if you were to imagine what would have happened if The Brothers Grimm were Japanese, you would have landed on this game. Rich, bright colours and an adorably cute protagonist (the Hundred Knight, more on him shortly), mask a seriously sinister plot. The music is thematically spot-on, and the monsters themselves are naturalistic and have an innocent charm, even as they fight back against the “hero.”

Of course, given the hero is actually in service of the villain it makes sense that the “monsters” look innocent. A spirit called The Hundred Knight is pulled into the service of an evil witch at the game’s outset, and his job is to spread a putrid swamp to destroy a lush forest and expand his master’s realm. The forest creatures are, in effect, fighting to defend their homeland and so the Knight is an inherent evil. Or so we think. This wouldn’t be a Nippon Ichi game without some truly insane plot twists, so I’m not going to spoil the game beyond describing the introduction above. 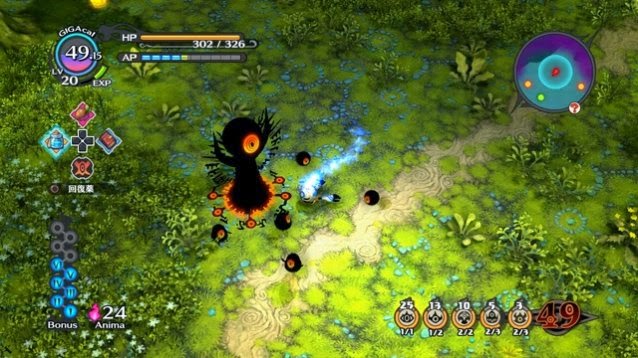 What I will say is that there is ultimately a moral point that the developers are looking to make. With the Knight being such an innocent (quite literally a baby), and being exploited to commit some pretty heinous deeds, the developers have written a fairly smart plot that not-so-subtly covers themes from child abuse through exploitation an innocence lost. As with so many JRPGs, it is unfortunately somewhat buried at times behind clunky writing and at other times is guilty at trying to do a little too much. When the writers hone in on the basic themes then the game works wonderfully, with a good sense of (dark) humour to boot. At other times it’s just as well the game itself is a load of fun, because the narrative can get irritating. Compared to something like The Guided Fate Paradox with its delightful mind games, this is not one of the finest stories that Nippon Ichi America has published.

Throughout the game’s narrative the other recurring central theme is around moral choice and independent thought. Most of the time the Knight mindlessly follows the orders of his master, being newborn to this world and generally unaware of the consequences of his actions, but every so often there will be a moment where the Knight has the opportunity to either choose to follow his orders, or ignore them to do something else instead. What I loved about these moments was that the result of being either compliant or defiant was never predictable and it was possible to pick the “wrong” answer either way and suffer some kind of consequence for it, but the consequences still made enough sense for me to accept them without feeling like the game was being nasty by creating outcomes that I couldn’t possibly predict in advance.

All of that said, it would have been nice if the narrative tied in more explicitly to the fairy tale theme. Yes the Knight plays the traditional role of an innocent waylaid in a Grimm Brothers tale, but the dialogue is filled with course language, which would never appear in even the darkest fairy tales. As a result the dialogue regularly acts to break with the sense of immersion, and while it helps present the witch herself as delightfully nasty, it leads to an inconsistent narrative tone. 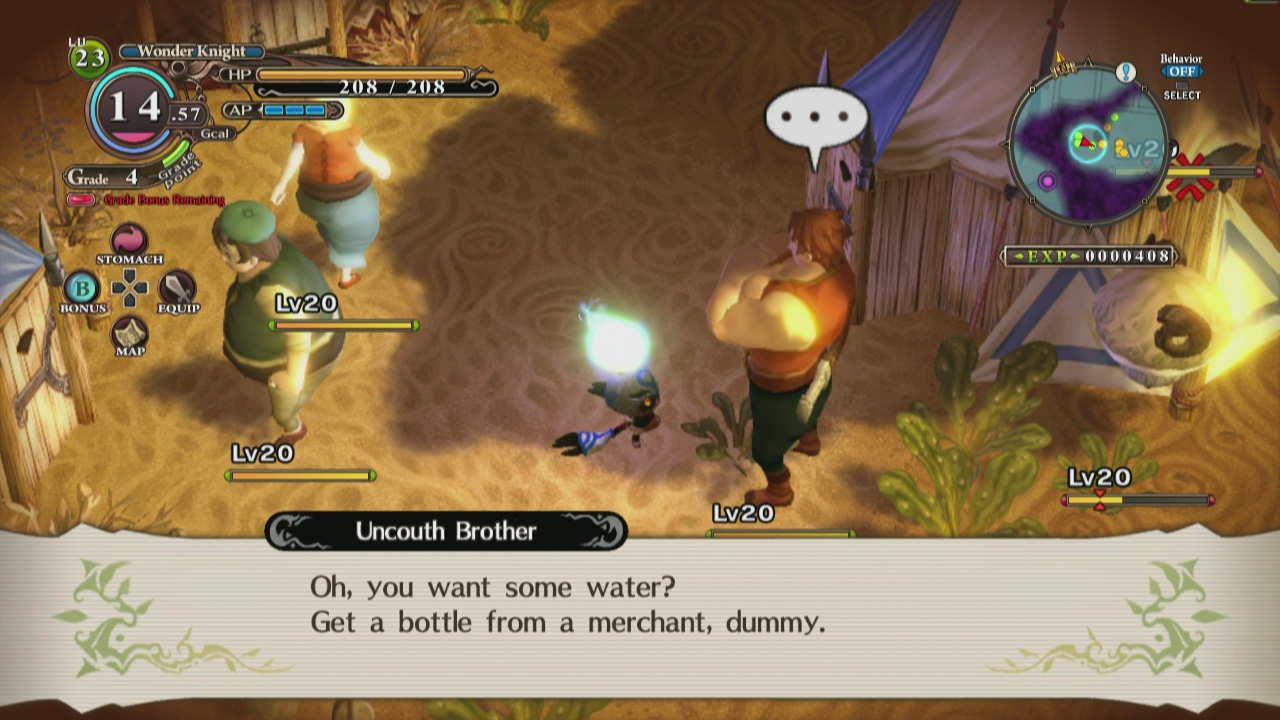 The game itself is action-heavy, but layered on top of it are all kinds of complex systems that are never really well explained. It’s only  after some practice, it starts to become clear that yes indeed this is a game from the folks that made Disgaea. The basic structure involves equipping up to five different weapons to the Knight, who will then swing them in order when stringing together a combo. Enemies have a usual set of strengths and weaknesses – one will require a hammer to damage, while another will be dangerous in close so you’ll be better off keeping a distance and hitting them with a spear. Backing this system up is a job system where the Knight can take on different jobs, each with their own strengths and weaknesses. Then the Knight needs to manage a karma system; doing too much evil on his own violation will make neutral or friendly NPCs less disposed towards him.

Then there’s special attacks to manage and rare loot to hunt out. Unlike Disgaea this is an action combat system (and a fairly fast one at that) so there simply isn’t the time to build in complex stat management structures, but there’s plenty of meat in The Witch and the Hundred Knight for perfectionists to stick their teeth into. As I mentioned before these systems aren’t well explained, so it’s nice that the combat is also balanced well enough that players will be able to enjoy themselves and get through the story without worrying too much about these systems.

Some would say that Nippon Ichi shouldn’t have included those features at all if the majority of people will get thought the game without bothering with them too much, but I disagree. I liked that this is a game that the more casual JRPG fans could engage with as a hack-and-slash grindfest, while also offering the kind of systems that the core base would appreciate as an opportunity to build really impressive max-stat Knights. If there’s any criticism that can be levelled at Disgaea games it’s that you absolutely have to be a hardcore fan to enjoy them. If The Witch and the Hundred Knight is an attempt to broaden out and find a new audience, then it’s a worthy cause. 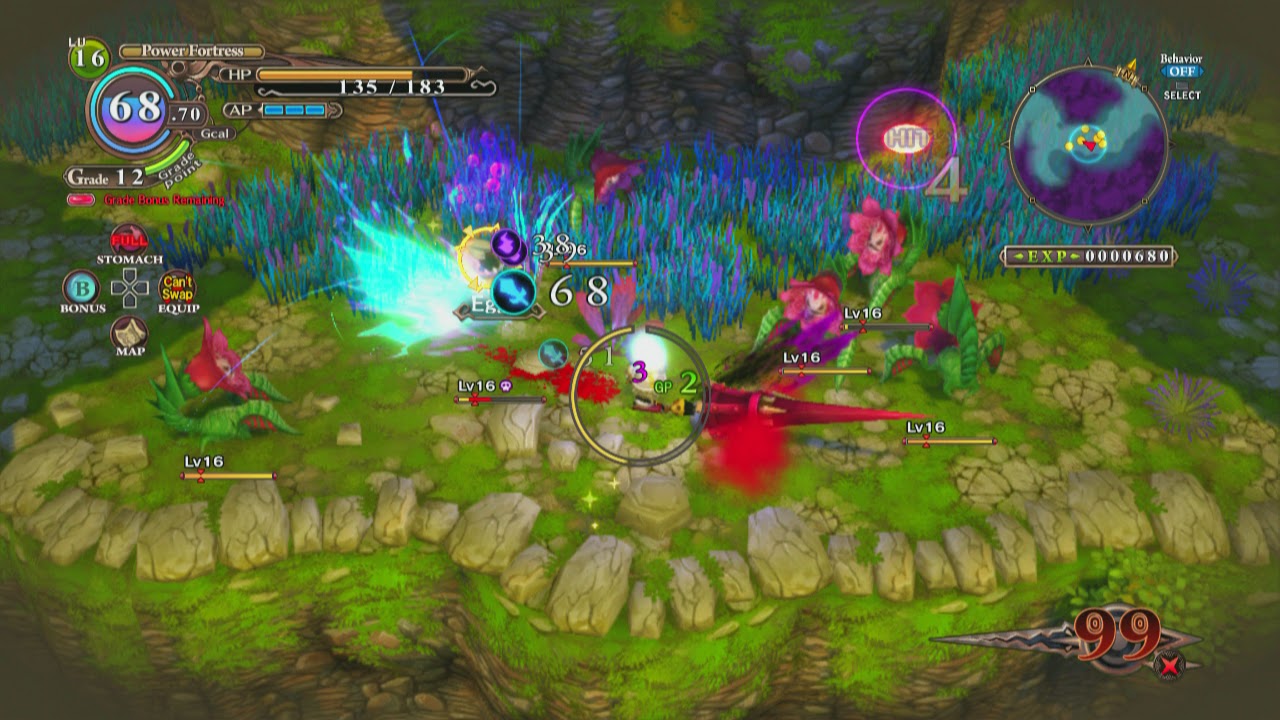 The only real issue I have with the gameplay itself is the fact that while there is the ability to rotate the camera around, the developers haven’t made use of scenery transparency to supplement that ability. Often I would get into a combat with an enemy, end up behind a tree or something, and have to flail away wildly because I was a little too busy to move the camera into a better position. The Witch and the Hundred Knight has awesome looking trees, but when I’m trying to bop an enemy on the head I don’t really want to be looking at them.

It’s always difficult to rate niche games like The Witch and the Hundred Knight, and this one moreso because it takes a certain degree of patience to mentally work into the game before it becomes enjoyable as a twist on a dark fairy tale. But I enjoyed myself and found the combat engaging enough to be confident that niche JRPG fans will get a kick out of it.