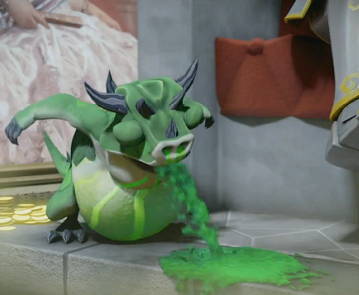 The Mighty Quest for Epic Loot is a free-to-play Dungeon Crawling and Simulation Action RPG where you get to raid other people’s castles for experience, treasure and glory. The characters are funky and have funny personalities, the customisable environments range from beautiful to comically horrifying, the game runs beautifully and frankly, Ubisoft has nailed this game.

The story itself is simple but amusing. You essentially sign away your soul as part of a contract to take possession of your own castle. This is turn allows you all the rights and privileges to plunder everyone else’s, and to be plundered in turn. In return for this priveledge Cornelius Richling (aka – your amazing PR guy) gains a cut so that he can continue to live as wealthily as he pleases. With the premise of the game I hadn’t even expected that much, but I was more than pleasantly surprised to know that there was a sense of humour that kept me playing through the thin storyline.

The first thing that you are required to do starting off the game is to pick your starting character. There are four hilarious ones to choose from. You have the option between the Archer and the Mage for ranged combat, or the Knight and the Runaway for melee. Each one has its own hilarious personality and a set of unique abilities to unlock as they gain in experience. Since the Mighty Quest for Epic Loot is a free-to-play game, the first character is free while the others will need to be purchased.

Once in the game itself The Mighty Quest for Epic Loot contains two major sections. The first is the “attack” portion where you select which castle you are going to head out to plunder and the second is “defend” portion where you set up for defences against other would-be plunderers. 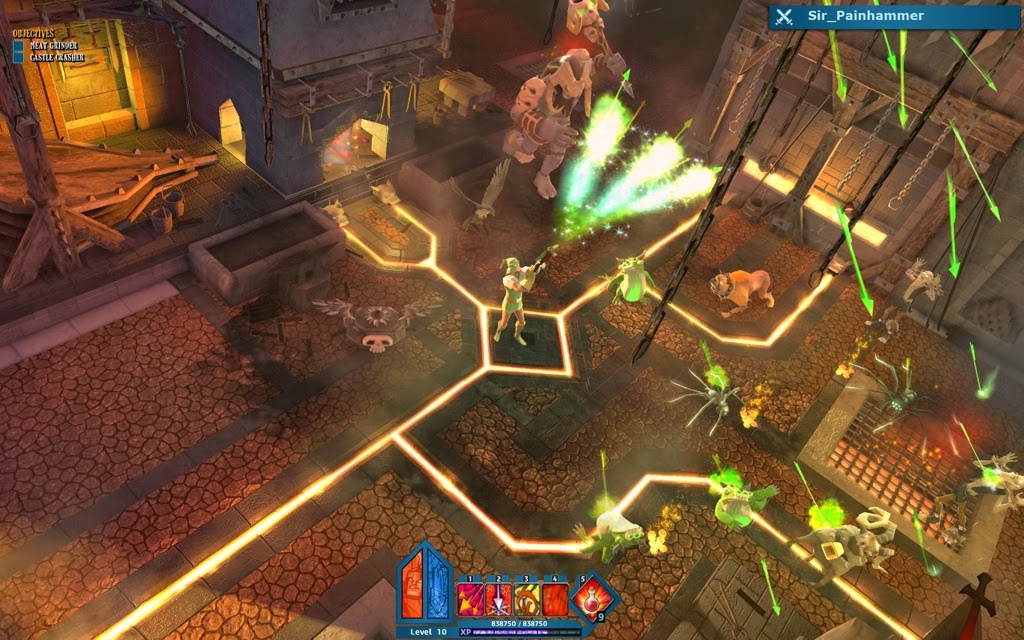 You’ll spend more time and effort attacking the other castles, however managing your castle’s defences are still quite important. When selecting which castle to attack you’ll be taken to a menu where each castle is listed with a number indicating the recommended level that your hero should be to try and take it on, and a colour coding in the background to denote the overall difficulty of the encounter. Green is for easy, yellow for medium, and red is for hard. This system makes it easy to figure out which castle to take a punt on.

That’s how the tutorial works, anyway. Once you make it into the second region, the castle names become highlighted differently. Castles that belong to the game are written on green banners while castles from other human players are written on blue. Green castles follow a normal progressive difficulty curve but the blue castles are a different story entirely. See, with blue castles you need to content with traps and monsters that another player has designed and laid out (more on that soon), and these castles can contain very big surprises that can terminate your attack quite swiftly. Some players are so good at placing nasty traps that I found myself very much inspired when designing my own defence layouts.

Other than worrying about the recommended level of the castle you are to invade, you need to make sure that you are properly equipped. There is nothing new in here; if you’ve played one hack and slash Diablo clone then you have nothing to worry about. Equipment can be gained by one of two ways. The first would be to use your blacksmith to create new pieces for your quests… but since that needs money it might be better to say that this is the plan B. Plan A is to is pick loot up off of the castle floors as you defeat the monsters within. 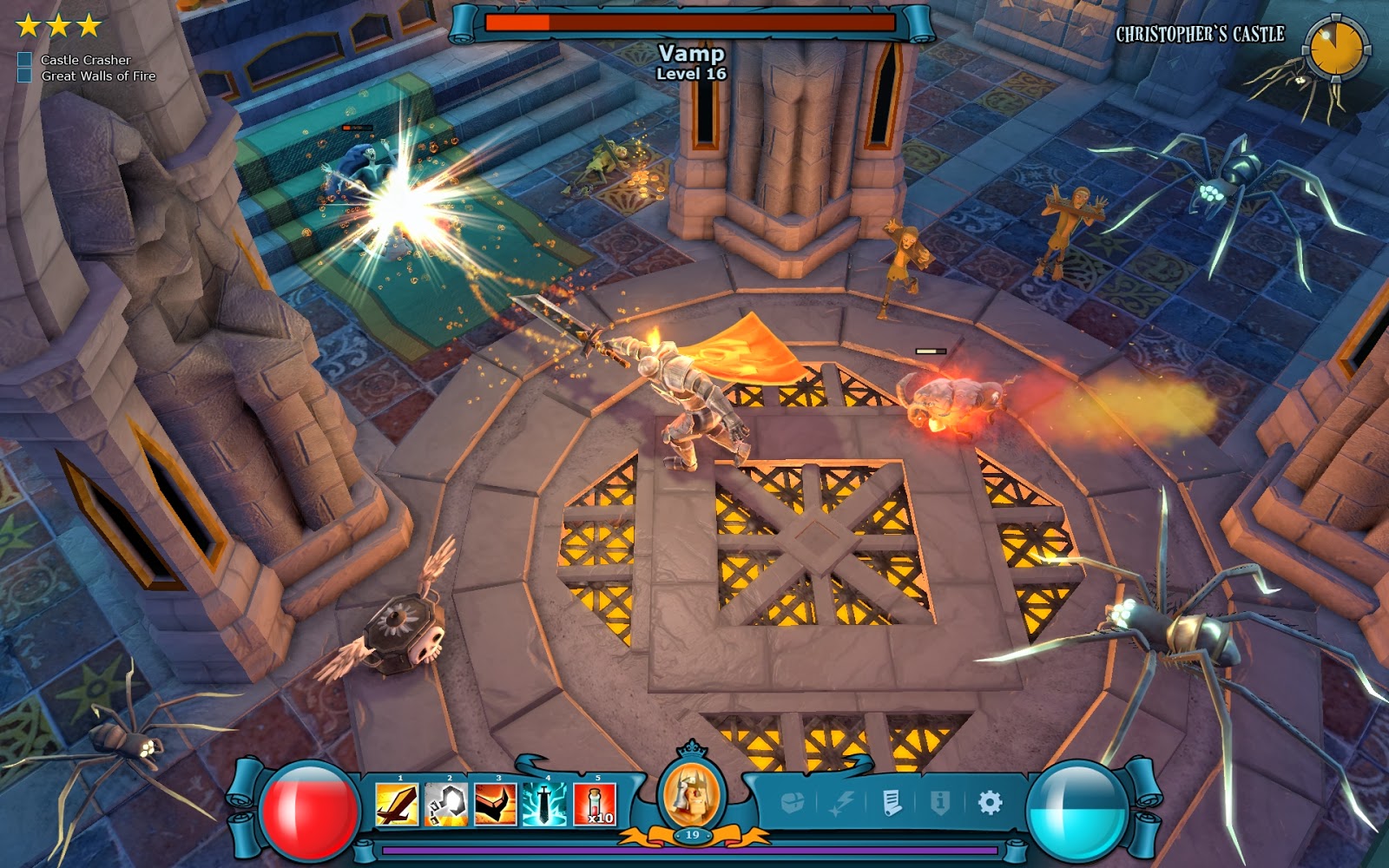 An castle assault is rather straightforward. Available to you during your plunders are four skills and four potions. You move around in a set third person isometric view that is zoomed in closely enough to encourage exploration. The camera can be rotated to one of four different angles that allow you to chose which way you want to be looking. I wondered at first if the combat was going to prove too simplistic in the longer term, but the different enemy types and the fact that they can be given different personalities is enough to keep the experience fresh throughout.

The gauntlet to the treasure room can be laden with traps and monsters. Deadly things to content with range from snot throwing frog like things (Snotters), mechanical beasts, a cyclops or two and skeletons, to traps that throw out glue bombs, flame throwers, mortars or hamsters running inside of a spike wheel (!). Each monster slain grants you experience and can drop equipment, gold, or crystals that you then use to kit out your own castle to try and repel enemy invaders.

Starting off castles feature only a few rooms. As such the levels themselves are not very long and generally you won’t spend more than a minute or two per castle. That being said, the further you go the longer it can take. It’s one awesome thrill ride to try to get through as quick as possible to beat the goal times that are set at the start of each raid reach the other user’s treasure vault. 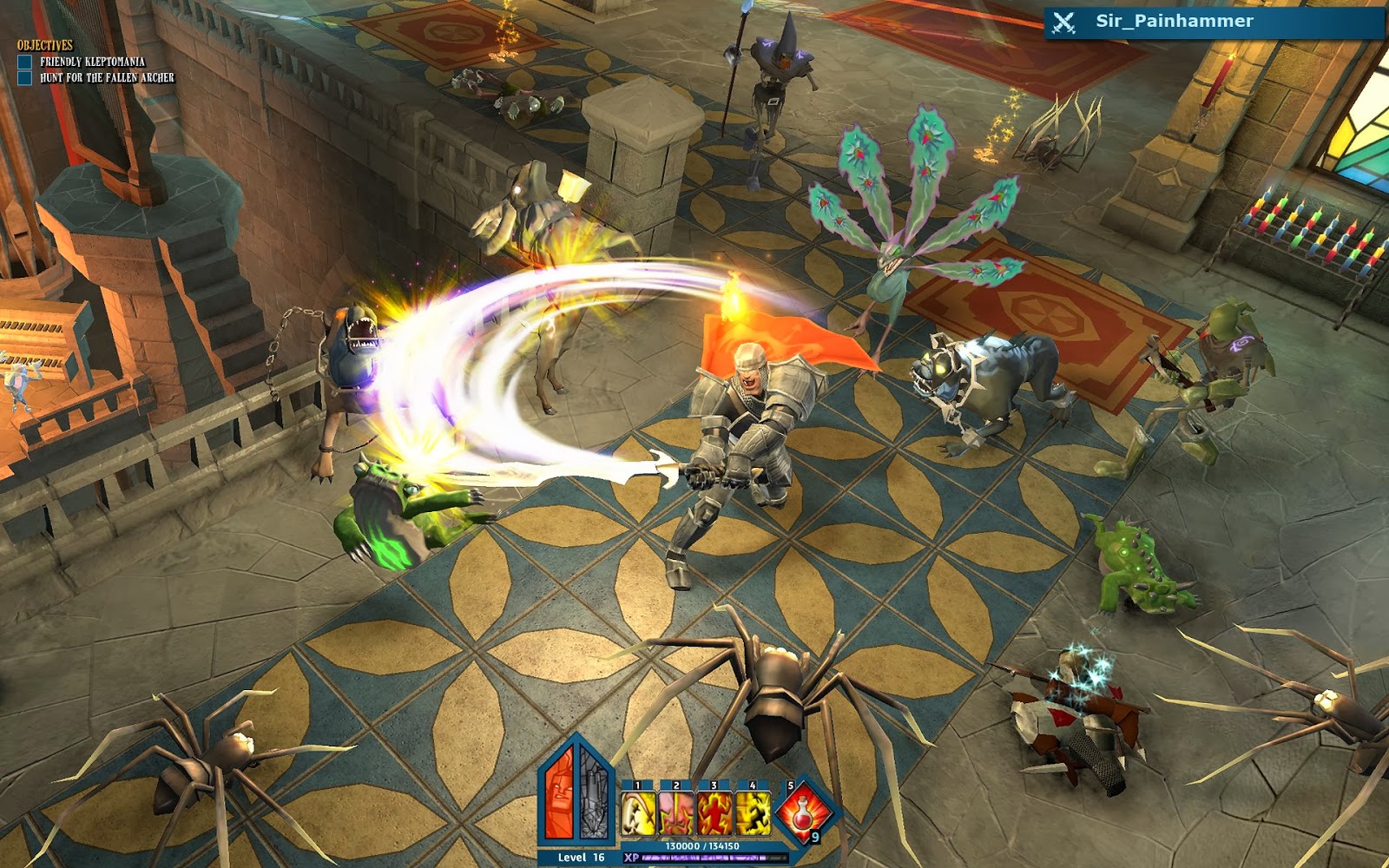 And now the second portion of the game; the defence. This is where you get to set up your own gauntlet of doom. The purpose of the defence is to protect the heart of your castle; a giant crystal that sits in your treasury and the more powerful you make it by pumping loot into it, the more powerful that your castle becomes. The heart can be upgraded as your character’s level increases and this affects your castle in numerous ways. Levelling up your Castle unlocks additional monsters and traps that can be placed within it, as well as a series of buildings, such as an alchemist’s lab that can be installed to upgrade the quality of the said monsters and traps, a potion maker that can be installed to give you the ability to create more potent potions to bring with you on your own quests, and a blacksmith, which is always available to build better gear if what you are finding is other castles.

Creating poor levels makes the job of your competitors easier and more of your resources could be lost to raiders. And that’s the true value of the game; it’s not just about collecting resources, but to then also protect your hard earned loot from pillaging.

The Mighty Quest for Epic Loot is an incredible game that is just so much fun to play whether you are diving head first into someone’s Castle or if you are working on your own Castle’s defences and trying to get things just right.