Nintendo was doing “HD” remakes before they were cool. Long, long before they were cool. Wind back to when the Game Boy Color was released, the company wanted to demonstrate just how much more powerful it was when compared to the original grey brick Game Boy. The solution? Port the incredibly popular Super Mario Bros. from the Nintendo Entertainment System, and then enhance it with extra features.

It’s hard to imagine just how impressive it was to be playing full NES games on a portable console that, unlike the likes of the Atari Lynx, was actually worth owning. Super Mario Bros. Deluxe enhances the game in some important manners, while adding a couple of fun extras as well.

The biggest addition was the ability to save your game mid-adventure. Recognising that perhaps people with a portable console might want need to suspend their game mid-play, Nintendo’s decision to implement a battery save was a very wise design decision. To account for the small screen of the Game Boy Color, the action is also zoomed in close with this version. It makes it a little harder to see what’s coming up next, but the sprites are nice and big and keep all the personality of the original NES game this way. 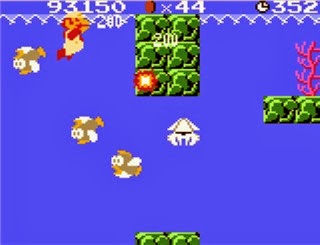 In addition to the classic gameplay, Nintendo also went back to the game and implemented some additional content to extend the package even further. There’s a couple of silly minigames, such a fortune teller, and then there’s a couple of remixed ways to play the existing levels. Players can try a challenge mode and track down a number of red coins hidden in each level, for instance. There’s a VS. mode (though I’m not sure if that can played through the 3DS), and for people who don’t have a friend to play with, there’s a VS. mode against an AI-controlled Boo.

These additional modes work brilliantly, and enhance a game that’s already great value. Of course by modern standards the levels of Super Mario Bros. are short and simple, but if you’re feeling an nostalgic itch, you can’t really go wrong with this version of this game.