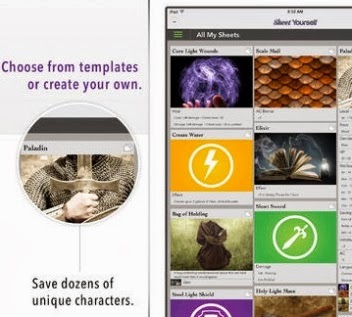 Finding a good application to digitalise your Dungeons & Dragons pen-and-paper RPG character sheet is more difficult than it should be. There’s plenty of them on the market, but they almost universally have terrible interfaces, or miss vital information, or are simply clunky to use.

Sheet Yourself is a good attempt to give pen-and-paper RPG fans an easy to use and slick digital character sheet. Critically, it’s very customisable, and it’s platform agnostic – it should work for any RPG that you’re playing (I say “should” only because I haven’t played every RPG out there. I’ve tested it on Call of Cthulhu and each edition of Dungeons & Dragons, and it works for them all). It’s a bit of busywork to get set up, as you’ll need to manually enter everything, but once it’s all in there it’s very easy to edit as the play session runs on.

I also don’t recommend going to a play session having not played around with the app for a while in your own time. The tutorial in Sheet Yourself isn’t great and it takes a while to really learn how to use the character sheets, and if there’s one thing that will annoy a gaming group, it’s a dude that needs to pause the action just as the dragon’s about to breathe some fire because he can’t figure out how to fix his character data after a spell has been cast. Yes. I’m aware that sounds like something Sheldon Cooper would say, but I don’t care, it’s the truth. 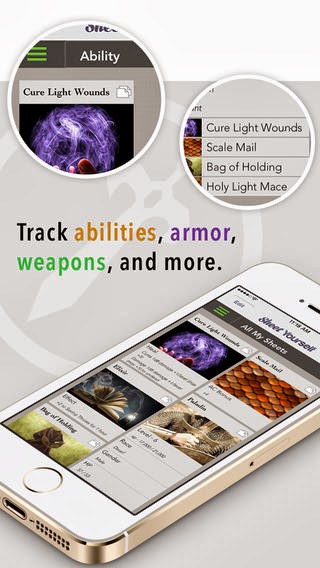 Once that learning curve is dealt with, the app presents all the information in a really nice, modern, manner. Information is grouped into tiles, like with most modern operating system user interfaces, and each tile can be given an image so as to be instantly recognisable. These images come from the user’s photo album, so you’ll need to do a bit of searching on Google for photos of maces and things… or you can hand draw them yourself in an art app and then copy them over to your character sheet.

There’s not much else to say about the app – it’s a little disappointing that there’s no option to print out a copy so you can have a physical copy with you, and it would have been ace if there was some Cloud trickery used so people could access their character sheets from PCs (currently, sharing is a very clunky emailed system that requires the other person to also have the Sheet Yourself app). The main thing however is that what Sheet Yourself sets out to do, it achieves; if you’re a pen-and-paper gamer with an iPhone and iPad this is a very efficient and aesthetically pleasing way to keep track of your characters.