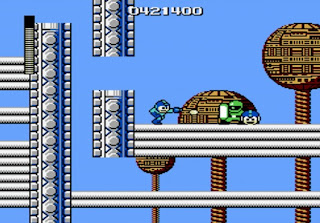 Mega Man’s first outing is surprisingly overlooked for a mascot-spawning title. Its relevance may be called into question given the widespread opinion that its sequels all offer finer experiences, but the blue bomber’s lightened release schedule these days and his inclusion in the upcoming Smash Bros. may well end up drawing a few extra curious eyes to his debut.
It’s still a sufficiently accessible platformer formula all these years later. Besides movement you’ve got a button for firing at enemies and another for fancy footwork. Stages feature a plethora of obstacles such as ladders, conveyor belts, and block puzzles to give each level its own distinct feel.
Verbally simplifying the formula does the charm of the series a disservice, however. Much of the appeal is derived from the various rogue robots that wait at the end of each regular stage. Each level is loosely based around that bot’s characteristics and trumping it will reward you with its trademark ability. 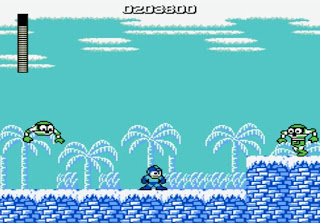 While this batch of villains is fairly rudimentary and only has six members (compared to the eight that would later become a series standard), each one still offers adequate charm to make boss encounters feel like consequential showdowns. To top things off, the level structure is open-ended until the final stages, enabling you to tackle the game at your own pace or move on if you can’t overcome a stage just yet.
With that said, Mega Man also features likely the most flawed implementation of the free level structure in the entire series. One weapon – the Magnet Beam – is mandatory for progressing through the game, yet recovering it requires that you defeat a certain robot master before another and are aware that weapons can be obtained outside boss bouts. There is no in-game notification that you need the weapon or that it even exists. Sure, it ceases to be an issue once you know what you’re doing, but this still comes off as a sore spot on a game that would otherwise be pleasantly clear-cut from start to finish.
Disregarding the love-it-or-hate-it aspects of the series such as its trial-based difficulty and enemies that regenerate when you leave the screen and return, Mega Man’s first outing is devoid of that extra layer of polish its sequels would prioritise. Checkpoints are notorious for placing you in spots where you’ll get hit almost instantly. Several blatant programming faults and slightly wonky physics further make the experience feel dated at times. 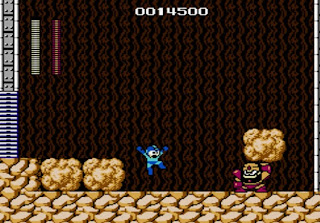 The difficulty level also tends to be uneven to a degree that the open-ended level structure can’t account for. For instance, Bomb Man’s stage can conceivably be completed on your first try, but Guts Man’s dastardly construction site will drain all your lives before a checkpoint is in sight. Naturally, you’ll want avoid Guts Man’s stage for as long as possible and likely trounce Elec Man before knowing anything about the Magnet Beam. The robot master abilities also rarely need to come into play either since most bosses are weak enough to fall to the standard Mega Buster. In the few instances where they are needed, they’re borderline compulsory to take down overly powerful leaders.
Commendable as it may be for introducing the blueprint of a successful franchise, the original Mega Man is not the ideal introductory point for newcomers. Series fans will not appreciate the Wii U re-release that much either considering its availability and that three of the game’s more interesting successors have been released simultaneously. Still, there’s a certain indefinable delight that transcends two decades and countless sequels.

The Mighty No. 9 “incident”; the games community just does not get feminism