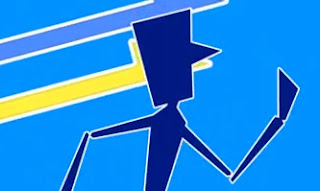 For indie developers, the go to place for platforming titles as of late has been on Nintendo’s 3DS eShop. Titles such as Mutant Mudds and Gunman Clive have been of a consistently great quality, and the asking price has been low. It’s been a welcomed treat for an old-school gamer that grew up with these type of games, but admittedly, the genre is starting to wear thin once again – it’s been right at five years since Capcom reinvigorated the genre with the release of Mega Man 9.

G-STYLE’s “Jump Trials” series had made a decent run on the DSiWare service in the past year, bringing another take of the ten second platforming titles that have become popular on the digital services, and is now making the leap to the 3DS eShop. Much like its predecessors, Jump Trials Supreme doesn’t really offer anything new to the genre, but still has a good bit for those looking for more fast paced platforming action. 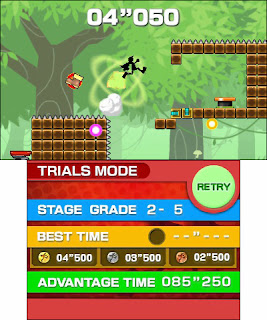 The game’s main gameplay mode follows the standard run and jump to the pressure pad at the level’s endpoint in under ten seconds formula that we’ve become accustomed to. Disappearing blocks, slippery ice, fans, spikes, rotating walkways and the other typical obstacles are thrown at players in order to make the initial 100 levels increasingly more difficult as they go.

Challenge Mode returns from Jump Trials Extreme and tasks players with collecting three gold coins strategically placed throughout each level, while still retaining the strict ten second timer. This mode turns up the difficulty significantly and is once again a welcomed addition to the game.

New to the series is the Course Attack Time mode, which puts you up against a set of ten stages and a 300-total second time limit. While the extended limit makes clearing these stages relatively easy, it’s the online leaderboards that will find you wanting to keep those times down as low as possible. For any game that offers a stiff challenge, online leaderboards near always bring about a healthy dose of replay value and it is no different here.

Platforming fans expect tight controls and quick restarts, and G-STYLE delivers. While there’s not much new to be offered here, Jump Trials Supreme’s fast paced action is sure to resonate with fans that haven’t quite had their fill of retro run and jump action.

The 24 Games of Christmas! Day #23: The Legend Of Zelda: A Link Between Worlds