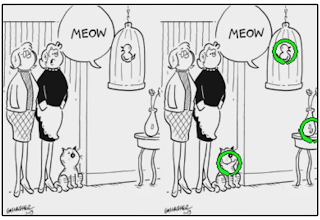 I really wanted to like this game more, as Heathcliff was a favourite cartoon character of mine as a kid. He was up there with Marmaduke, Garfield and more when I read the Sunday comics my dad gave me every weekend. Spot On runs with the old colouring/ activity book idea of ‘spot the difference’, and while it does so at an adequate level fundamentally, there is just not a lot of reason to go back to it once you have played this title for an hour or so.

The best part about this game is the use of the genuine-looking comic panels as you compare two nearly identical pictures side-by-side and try to tap where things are different. For example, you might note a difference in the apron Heathcliff is wearing, or that the letter Z is backwards in a picture. This is not terribly challenging stuff, but there are some difficulty tweaks you can make use of. I found the old black and white pages to be a bit more challenging than the coloured ones – likely because without the colours it is easier for items to blend together.

There is a mini game that gets sprinkled in every ten levels that allows you to whack mice on the head. I appreciate the attempt to breaking up the core gameplay’s monotony, but I really did not care for this sub game at all. It was incredibly dull. 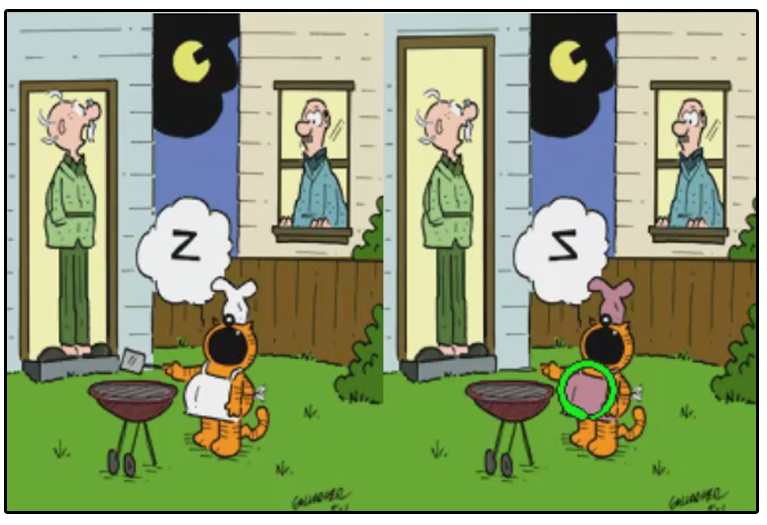 An electronic version of a spot-the-difference game seems like there would be some significant advantages over the static colouring book variety. Unfortunately there are only a couple of things that really help it to stand out. One of course is the ability to cheat and reveal a difference (or just reveal them all and move on); certainly something you can’t do in a normal puzzle book. However, the music is dull, the visuals are lifeless and perhaps most frustrating for me was that the cartoons are different from their original form.

What I mean by that is there are no thought or conversation bubbles. All of the story context is at the bottom of the image. Often images feel incomplete as well, as you are working with a single panel that was likely stripped from a series of panels that comprised a Sunday comic strip. A nice reward for beating the stage might have been showing off more of the story or context around the single panel, but that never happens and leaves each of these over one hundred levels feeling incomplete in the end.

Heathcliff: Spot On feels like a series of small but missed opportunities. The core functionality of the gameplay is fine, and the choice of a well-known comic character to wrap the mechanics around is good in theory, but lacking in execution. If what you really want to do is play a spot-the-difference game, Heathcliff will get the job done – just do not go in expecting a lot of extra bells and whistles.

Review: Race to the Line (3DS)