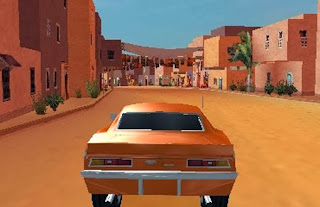 (Please note that this is the same game as Chevrolet Camaro: Wild Ride, renamed for the US market. You can read our original review here.)

Racing games can be a tricky affair, especially on the small screen of a portable device. I have found very few racing games that settled well with me on the go, and those that do are the titles that tend to take themselves a bit less seriously (like Mario Kart for the 3DS).

Race to the Line attempts to be a serious racing game, but on a much smaller budget. The title is far more often miss than hit, though it does do a handful of things appreciably well. In the end though, the sum of its parts is a racing game with good intentions but only so-so execution.

To start, the visuals are actually impressive. There is some notable pop-in on the distant backgrounds, but considering how good they and the car look, that is easy enough to forgive. Less impressive is the audio, which has the disadvantage of trying to produce convincing car sounds on smaller speakers while providing an incredibly limited musical selection. It is a shame really, because when you have half of a good presentation, the poorly performing half more often than stands out like a sore thumb, as is the case here. 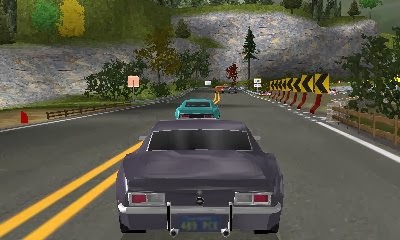 The other issue is that Race to the Line has only a handful of tracks. At times I felt like Race to the Line was meant for younger racers, because the tracks are only of average difficulty and the racing itself does not provide much of a challenge. The cars actually handle quite well – almost too well. You can control your car with precision accuracy, despite some of the tight turns. The AI (or really, the lack of) of the other cars on the tracks is pretty bad. They seem to come to stops or just give up after some contact.

Most egregiously, Race to the Line just feels slow. There is very little sense of speed when you are zipping down the tracks. This probably ties into the controls and how I never felt like I was losing my car on turns, but to me this was just a deal killer. Without the feeling of truly racing down a track at borderline reckless speeds, Race to the Line’s visual proficiency is wasted on what feels more like a sightseeing trip.