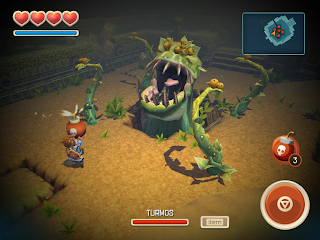 I suspect this game is going to annoy Nintendo fans. Without crossing into plagiarism, Oceanhorn is a faithful recreation of the basic Zelda aesthetic and gameplay structure, and not only that but it brings more new ideas to the famous formula than most modern Zelda games have managed.

The obvious inspiration for this title is Zelda: Wind Waker. Players come into possession of a small boat early on and from there the quest involves sailing from island to island, looking for precious objects and delving into puzzle-filled dungeons. As with Zelda games, environments only start to open up once you’ve acquired the right tool for progress through a barrier; for an easy example there are parts of islands blocked by objects that can only be destroyed by bombs.

Zelda fans who can get over the sacrilege of this game appearing on the iPad are going to be right at home within this structure, and it should be noted that the puzzles within the dungeons, especially, are truly engaging. As someone who has played these games since the early days I haven’t felt this engaged within “Zelda style” labyrinths since the top-down classics like Link’s Awakening and A Link To The Past. 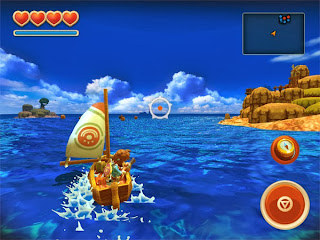 The presentation helps to drive this point home. The “Link” of Oceanhorn manages to be Link without being a copyright infringement. His shield design is similar, and just like Link, he doesn’t talk but rather just grunts and yells as he swings his blade around (and even has a circular spin attack to boot). “Link’s” enemies manage to be Zelda enemies slightly reskinned (including the annoying Deku-nut spitting blob things), and the environments are a really gorgeous mix of the toon Link style of Wind Waker and the more natural colours of other Zelda titles.

Somehow Oceanhorn has its own personality though. The narrative and pacing are completely different to a typical Zelda title. Oceanhorn runs much quicker through its story than any of the Zelda game, and it is a sign of the development team’s relative inexperience that it never quite hits the heights of Nintendo’s works.

On the other hand, what Oceanhorn absolutely nails is the more organic dungeon designs. I always felt that Zelda dungeons were a little too contrived for their own good – they felt grid-based and artificially designed to subtly nudge players in the right direction. Oceanhorn’s dungeons feel more natural. It’s somewhat easier to get lost (completely lost), and perhaps some people will be frustrated by the experience, but as far as I’m concerned these dungeons were that much more engaging for it. 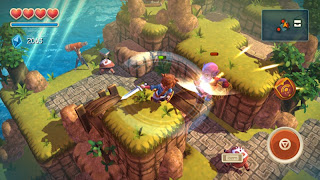 There’s also some truly original touches in here that Nintendo itself might want to take note of. The experience system that’s in place here gives combat a more meaningful feel, without going all the way into RPG territory. Each island also tasks players with a few optional challenges. These function much like trophies or achievements and provide completionists with some small rewards for pushing themselves just that little bit further.

I also know that some people will object to the game being a touch screen experience, but I personally haven’t come across a iPad game with better virtual controls than this one. There’s also not that many buttons to keep track of in Oceanhorn which does help playability. I’m not sure I would get on so well with this if I had to juggle much more, but limited as it is nothing ever happened that I was not completely in control of.

There’s the very occasional glitch that you wouldn’t ever expect to see in a Zelda game, but then this is an tablet exclusive game that very close to the quality of Nintendo’s finest franchise that’s being sold for a fraction of the price (and is a very small download, to boot). I’m very interested to see if this developer can continue to build on what they’ve created here, because as derivative as Oceanhorn is, it’s also classic fun.