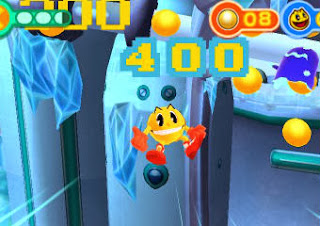 I was pleasantly surprised at how much I enjoyed the recently released Pac-Man and the Ghostly Adventures on the PlayStation 3. It offered some neat throwbacks to Sonic or Mario in there with its 3D platforming and power-ups. Namco Bandai made a game with the same name for the Nintendo 3DS as well, and it is a game with some similarities to the non-handheld versions, but many notable differences as well.

I am not sure why, but I find it somewhat amusing that the Nintendo 3DS tends to see more 2D platformers than 3D releases. This is once again the case here as Pac’s newest adventure is set in the same world as the cartoon series, and has many of the same elements as the 3D platformer, but in fact is a largely horizontal scrolling 2D platformer.

The visuals are bright and colourful and I enjoyed the character animations, though I found the background scenery somewhat lacking at times. The different environments are nice and varied as themes, but sometimes there is not a lot of movement in the background nor a great deal of detail. Also the 3D effect while pleasant enough and easy on the eyes, is not terribly pronounced in this game. This is still a far cry better than some 3DS games where the effect is so badly mismanaged that it actually hurts and strains your eyes, but the sense of depth is rather shallow. 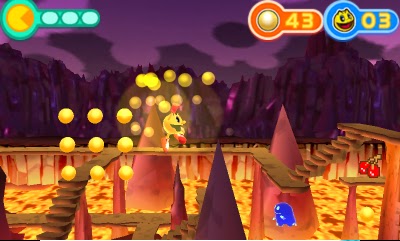 Now while the other version of the Ghostly Adventures reminded me of Sonic or Mario, this one actually reminded me of Mega Man quite a bit. That you can approach stages in the order you want and then unlock super powers really harkens back to the Mega Man series in structure, if not execution. Some of those skills give you some range, but your primary attack as Pac-Man is to chomp your enemies. This mechanic takes just a bit of getting used to, because that lunge forward takes some practice to get the hang of. More unusual to me was his method of jumping, which has a floaty extra ‘umph’ you can put on the tail end of your jumps if you hold down the button long enough. That combined with the chomp can make for some interesting airborne combinations, but it does take a bit of practice to get the hang of.

The levels are designed pretty well, and there are some genuine challenges to be had in there also. There are often multiple ways to progress through a stage that often make use of the power-ups in clever fashion. I will add that this game is much harder than the PlayStation 3 version I played. There you can replay levels and farm lots of extra lives and health, but here things are a bit less forgiving and I found myself dying more rapidly. There are traps and places you need to use your special powers to progress. At first I was a little concerned about that since these power-ups have a limited number of uses per level, but the designers thankfully took that into account and made sure that you always had the option of progression (as long as your platforming skills are up to the task). 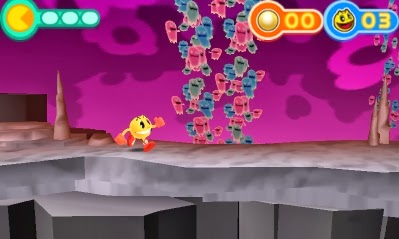 Unfortunately the game is over quickly. Once you figure out the ‘trick’ to a few of the tougher obstacles, you can cruise through that area without much trouble. The handful of zones are well-made, but not terribly long. All up I got around four-and-a-half hours out of it. Given that it is the same price as its much longer console counterpart, it’s going to be more difficult to justify the purchase for many. If that particular point does not worry you overly much and the idea of a more melee-like Mega Man platformer appeals to you, you will probably find Pac-Man’s portable adventures to your liking.

Like writing fan fiction? Want to get published? Well here’s the gig for you!