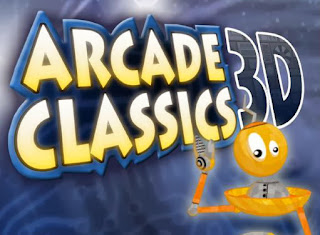 Written by Michael B.
Game collection titles are an interesting oddity. From an uninformed viewpoint they seem like the best of both worlds, as developers are given the freedom to mess around with several dozen different mechanics and players are given more variety for their money. Unfortunately, most game collections are poorly made, and these games are typically best ignored by informed players unless they are truly bored. It is sad because there is good potential in game collections for experimentation.
Arcade Classics 3D is NOT a game collection rife with innovation. In fact, Arcade Classics 3D has no innovation in it at all, and the quality of what it does do is non-existent.
After immediately being thrust to the main menu with no title screen or anything (a sure fire sign of a cheap game), the player has a selection of six games. The games are as follows: “Jewel,” a Bejeweled clone, “Bounce & Break,” a Breakout clone, “Impacts,” an Asteroids clone, “Pop It Up,” a Puzzle Bobble clone, “Blocks,” a Tetris clone, and “Swap,” a Columns clone. Unfortunately, none of these can be considered good in any way. 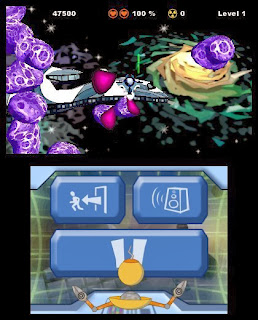 Jewel is not just a Bejeweled clone, but a simplified one at that. Instead of the standard seven types of jewels the game starts with just, with more types of gems being ever so slowly added as the levels increase. Jewel also offers no resistance for the player to overcome, because with so few gems for so long the game lasts for far too long. There a credits system which are depleted when the player makes a wrong move and once the credits run out it’s game over, but since there is no time pressure to make a move the player will almost never have to use them.
Bounce & Break is a Breakout clone through and through, power-ups and all. However, there are two exceptions. Firstly, the game can only be controlled with the circle pad. While not a major loss, it does not make much sense to exclude stylus control. Secondly, the framerate is horrendous, making the game slow to watch and sluggish to play. This is baffling, as there is no indication of what would make this game run at such a bad framerate. Aside from a giant 3D rendered sphere, the only conclusion to this framerate mystery is that this game is ridiculously unoptimised for the hardware of the 3DS.
Impacts is an Asteroids clone. The player can shoot lasers and missiles to destroy asteroids, with the goal being to destroy all of those asteroids before moving onto the next stage. Thankfully the game allows you to move in 360Osans momentum, which is a nice efficient touch that unfortunately dismisses the tension of the original Asteroids. However, the bigger problem of the game is that the player and asteroid hitboxes are too big, especially considering how many asteroids the game wants to throw at you. If not for those hitboxes were toned down, it would be possible to eke some genuine entertainment out of Impacts.
Pop It Up is a Puzzle Bobbleclone that has no frills whatsoever. The classic gameplay structure of Puzzle Bobbleis unchanged. The game has an uninteresting, dark underwater background that does absolutely nothing but fill in blank space. The puzzles are not anything vastly new or interesting, especially to those who have played any game similar to Puzzle Bobble. The only other thing to note is that rather than making the current direction the circle pad is pointed in the position the cannon is pointed, pushing the circle pad to the left and to the right change the angle the cannon is firing. Considering that pushing the circle pad to either the absolute left or the absolute right completely swings the cannon to its limit on either side, this is a completely unnecessary quirk that can take a while to get used to.

Blocks is a Tetrisclone that has no frills, much like Pop It Up. Although I would question just how many people remembered playing Tetris in the arcades, I won’t question that as Blocks is a fairly adequate recreation of Tetris. The seven types of Tetrisblock configurations will fall from the sky and completely filled rows of blocks will be eliminated from play, clearing that row and winning the player points. Other than my observations concluding that the speed of the game lacks the intensity of real Tetris, I cannot fault this title. Of course, the major problem here is that Blocks is an adequate Tetrisclone when plenty of official and non-official recreations of Tetrisalready exist on the 3DS. If you are looking to play Tetrison your 3DS, there are certainly better alternatives than buying this game.

The final game is Swap, a clone of the lesser-known Columns puzzler. Totem poles of blocks will fall from the sky, each block having a specific colour. While the player cannot flip these totem poles like the long pieces in Tetris, the player can change the order of the blocks. Getting three blocks of the same colour in a row results in those blocks disappearing. Considering both the increased space for blocks to be placed and the relative ease of matching colours as opposed to spacial organization, Swap comes off as slightly easy in the face of Tetris. However, what truly brings this game down is that it suffers horrible framerate problems, much like Impacts. It can take several seconds just to drag one piece down to the bottom of the playing board. This makes the whole experience horrendously slow. Packaged with the easy difficulty, this is easily the worst and laziest game within the collection.
Overall, Arcade Classics 3Dis a very poor game collection. With almost all of the games having a technical bug or oddity that ruins the experience, nothing is remarkable about this title. It contains lazy recreations of several famous games, none of which can be accurately analogous to their true counterparts.