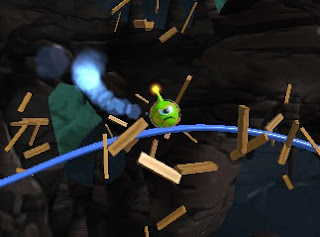 One of the joys of writing game reviews is that sometimes it’s the least expected games that surprises you. When Big John Games’ Ohno Odyssey came across my desk, the thought that came to mind was: “Oh no!” Yet, this charming little alien filled physics-based puzzle game proved my initial reactions wrong and put a smile on my face each and every time one of the little aliens cried “Oh no!”, as they approached their inevitable demise.

If you’ve played a physics-based puzzle game, the basic gameplay formula is in play here. Without directly controlling your character on a 2D plane, you’ll need to make proper use of a multitude of items such as ramps, springs and balloons to devise a path to get your alien to the level’s end, which is, of course, a UFO. Yet, it’s the little alien, an Ohno, that you guide that’s so charming. The way its circular form rolls around is charming and its large mouth and eyes are largely hypnotic. To Big John Games, all I have to say is, “Oh no you didn’t!”

It’s silly whimsical fun and sometimes that’s just the thing I need; a break from from the intensity of modern video games. Each of the four major levels all introduce new gameplay elements, which can drastically change the way you choose to get the alien to his spaceship. For instance, items that trigger wind can rapidly push your alien in a desired direction and cannons can be placed to blast him over long distances, or even better, through a narrow gap to shortcut a portion of the level. See, level structures here are quite long and many times, very tricky. It’s takes some thought and oftentimes a good deal of trial-and-error to devise a proper path to get your little guy to safety. 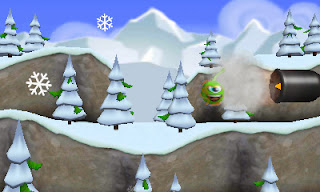 Placing objects in the game is relatively easy, but as an avid fan of Amazing Alex and Crayon Physics Deluxe on the iPad, it isn’t as intuitive as it would be on a sole touchscreen device. Upon level completion, you’re awarded extra score for the items that you didn’t use up along the way – encouraging you to find new ways to beat each level. This can be a good deal of fun and that replay value is needed, as there’s only 35 stages available, including the initial tutorial levels in each world. Of course, each world brings new gameplay elements to play with, keeping repetition at bay, but nevertheless the game is a little light on content.

Big John Games’ Ohno Odyssey is a charming little physics-based title that’s offers up a few hours of whimsical and challenging fun. This is yet another solid entry in the ever growing list of classy indie games on the 3DS eShop.

Xbox One Australia head on partnerships over internal development: ‘We’re not about building empires’