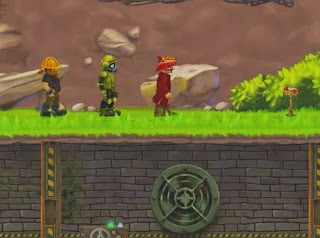 The first A-Men was a title that caught me completely unprepared when it first came out. It was listed as a strategy game, but it also blended in some light platforming. Also, when I think of strategy I tend to think more of tactics title such as Fire Emblem, but here Bloober Team assembled a game that was more like progressive puzzle-solving. There were things about A-Men that I liked in my review, but there were also aspects of the game that were somewhat frustrating when I gave it a go on the PlayStation 3.

A-Men 2 is very similar to the first title, for better or for worse. If you enjoyed the challenges that came into play, you will probably find more of the same here. Bloober did not reinvent any wheels here, but they did do a nice job of polishing things up a bit. The visuals continue to look quite nice, with detailed characters, brightly coloured environments and an excellent framerate that shows off some nice animations. So all good on the presentation front. What this game comes down to however, is whether or not the difficulty in A-Men translates into fun, or frustration. Bloober Team is not shying away from that here. I felt the puzzles were better explained and perhaps somewhat more fair in execution than in the first title, and now everything makes sense when it comes together. That being said, there is a tremendous amount of trial and error involved in getting through the game, with emphasis on the error. To Bloober’s credit, they own this with a very popular quote that I have seen circulating the Web since they announced A-Men 2, stating that it is “arguably the most punishing game on PSN and Vita to date, where only precision and speed of thought will be rewarded with progress.”

That is quite the statement. In a day and age where people often complain that games are too easy, offer too many check points or hold the player’s hand too often, Bloober Team has set out with the outright goal of frustrating them. Unfortunately too often the challenges still too often veer towards being unenjoyably frustrating. The incremental method of advancement through trial and error means you attempt to progress, hit a puzzle, try a few things, mess it up and go back to the beginning. You then repeat the process, getting just a bit further, dying and start over again. Once you know how to tackle a level, you can generally get through it in about two minutes.

There is plenty of content here – four worlds with 44 stages gives you a lot of ways to flex your mental creativity here. I generally enjoyed A-Men more in fairly short bursts of roughly half of an hour. Anything more than that, and I would get dejected or even upset with the game and as a result I would find myself trying to rush through and inevitably failing in even more spectacular fashions. 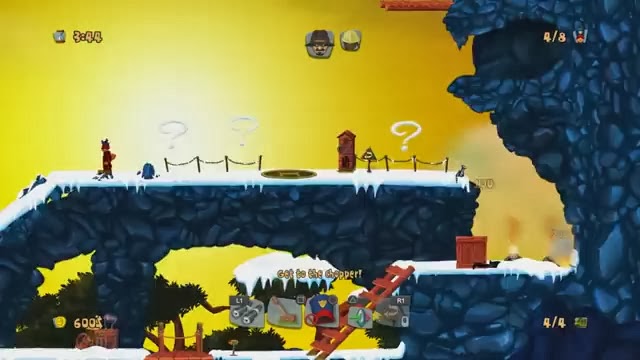 Players are in control of a varying number of operatives who attempt to advance through the stage. Each operative has their own unique abilities, such as a rifle that can shoot down boulders that knock out bridges or roll over enemies. Another example is a man who can put on a hat to act as a ‘spy’ among the enemies, who will not kill him on contact – so long as he does not try to interact with the environment in any way when they are close by. Each of your colourful soldiers has a unique talent like this that can be put to use while solving puzzles. And it’s nice that there are alternate ways through some of the puzzles; sometimes you will see an obstacle and think it is obvious how you should approach it, but then upon doing so realise that there was an alternate method of advancing.

This is not a game that is going to appeal to everyone, but I think the developers knew this going in. They are really trying to pique the interest of a specific group of gamers and I admire the fact that they are narrowed in on that and not making compromises. That being said, it makes A-Men 2 hard to suggest to many people for the simple reason that it’s just not that enjoyable unless you’ve got a high threshold for pain.