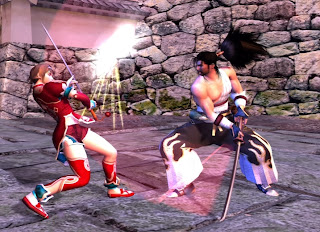 Of the many HD remakes we’ve seen this generation this one I don’t quite get, though I’m certainly not complaining of its existence. While Soulcalibur 2 is arguably the finest game in the franchise, it’s impossible to argue that the current generation’s Soulcalibur 5 is a lesser game; it has more characters, more gameplay options, and more a more complex art direction.

Soulcalibur 2 in HD looks great thanks to its timeless art direction, but like most HD remakes there’s small details that are missing here – environments look and feel more basic, for instance, and character models might be HD, but they are low on the detail that would mark them out as next gen character designs. They look like mannequin models, in other words. Other than the online combat there isn’t anything that has been added to the package either. By modern fighting game standards it’s quite the minimalist package.

But then this is the game that, when I discovered it existed on my university campus’ little arcade, I very nearly failed a couple of classes because my attendance record plummeted. It was my most played Gamecube game after Smash Brothers Melee. It was, in fact, the first fighting game that I truly enjoyed because at the time I wasn’t a huge fan of 2D fighters (Smash Bros aside, of course, and I’ve largely gotten over that thanks to the likes of Injustice and Persona 4 Arena). 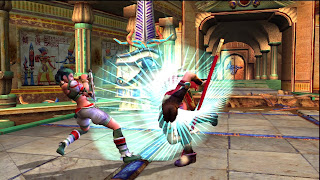 There is something endlessly fluid and balanced about Soulcalibur 2 that was truly compelling back in the day, and still feels so very natural today. The slick combo system, the wonderful weapon balance that created a Rock-Paper-Scissors play between light, medium and heavy weapons that to this day feels gratifying when you use sheer skill to outplay the opponent with the superior weapon set-up.

Though it lacks the modern trims there are all the mandatory elements of a fighting game; a silly arcade “story” mode, survival, time attack and so on and so forth, as well as the multiplayer, both local and online. Local multiplayer is still the superior experience since these kinds of games are best enjoyed in company, but the online mode works as well as would be expected given it’s the one additional feature in this game over the original release.

What is most impressive of all this though is how the combat itself flows. With some practice, the sheer speed and fluidity of the characters becomes like an extension of your own will. Heavy weapons feel heavy, and have great impact when they connect. Light weapons and characters feel like they are capable of ducking and diving into and out of the attack range of their heavier-hitting opponents.

Everything is so balanced and fluid that it’s quite reasonable to argue that the developers got carried away after this game, and the series from Soulcalibur 3 onwards started to become weighted down by excess. If it was a full priced game it would hard to argue that it holds up against some other fighting games out there in the market right now, HD and online makeover or not. But for the cheap price? This here is quality nostalgia gaming wrapped up in a neat little download.