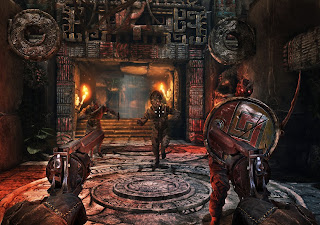 Review by Michael B.
Although it may have been conceived as a standard action-filled plot, the story of Deadfall Adventures belongs firmly in the “lost world” fiction sub-genre. For those unfamiliar, the lost world genre involves the discovery of a city or location that has been forgotten. The two easiest examples of the lost world genre being utilised in games are in the Uncharted series and the Tomb Raider series. Those are some big shoes for Deadfall Adventures to compete with.
As a piece of fiction, Deadfall Adventures unfortunately does not have a satisfying pay-off to the inevitable reveal of its lost world. The art direction, level design, and gameplay that people experience in this lost world are all too similar to what came before. If the payoff of a long journey is a significant part of your enjoyment of lost world works (and for many fans of the genre than the very visceral reveal and subsequent exploration of these environments is core to their enjoyment of them), then I cannot recommend Deadfall Adventures. 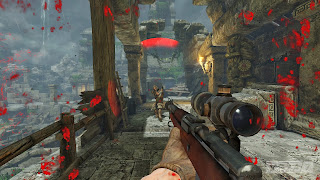 But if you’re able to ignore that major story issue, Deadfall Adventures is a fairly component FPS. I will be the first to admit that the game will not define a generation or become a standard in the FPS genre, but for what Deadfall Adventures is it’s enjoyable.
The story of Deadfall Adventures begins with James Lee Quartermain, the great grandson of Allen Quartermain from King Solomon’s Mines, becoming the bodyguard for Agent Goodwin, an English woman acting under the orders of her organisation to find a supposedly cursed relic hidden in a temple in Egypt. All of this escalates rather quickly to the level of classic Hollywood adventure movies, with the quasi-undead, Germans, and Russians all having their fair share in the unfair spotlight. It’s all very Hollywood and high energy, but like the films of, say, Michael Bay, anyone looking for somethign with meat is going to be sorely disappointed.
The gameplay of Deadfall Adventures certainly adds to the classic feel of the game. While the game does feature the standard set of modern FPS mechanics such as a small weapon carrying limit and regenerating health, it’s really the environment design, which is the better part of the game, that deserves real notice. The way the weapons function, look, and sound all come together to make the act of playing the game enjoyable. The only complaint I have towards the core mechanics of Deadfall Adventures is that there is no clear indicator of health, but the numerous checkpoints and breaks from shooting gameplay do wonders to prevent that from becoming frustrating. 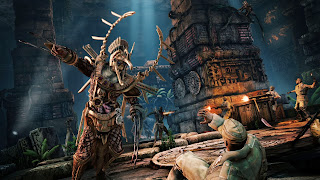 The biggest challenge the game faces in convincing players that its puzzles were worth including. These sections add to the environmental variety of the game but unfortunately are not exactly strong puzzles in and of themselves. Half of them involve looking around the room for whatever the player needs to shoot or take note of while the majority of the rest involve aligning certain shapes into a particular pattern. By no means are they hard nor complicated, but as additions to the gunplay they are nice breaks.

The environments, on the other hand, are superbly crafted. Their function to gameplay is not absolutely unique, but it does the job well to spice up firefights and puzzle solving. The environments also look extremely good, especially considering that this is not a high-budget title. Environments range from underground lava-filled expanses to Arctic research bases, all of them having large and small details. It may not impress people the way that games in the Uncharted series do, but those areas are still well-crafted in the extreme. 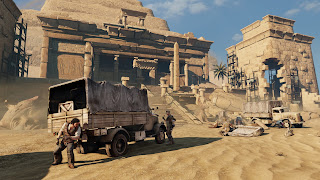 Another part of the gameplay that is worth mentioning is that Deadfall Adventures gives additional functions to stuff that is typically very mundane. While the flashlight is certainly handy for some areas of the game, it also is used as a vital instrument in combat. The collectibles, rather than just being meaningless extras, are tied to an upgrade system. Rarely are all of the mechanics of a game so core to the experience, but here in Deadfall Adventures such is the case.
While this gameplay is certainly enjoyable, it occasionally does clash with the tone of the series. A majority of the in-game dialogue conveys the tone of more lighthearted situations or obviously over-the-top encounters. Several gameplay scenes in particular are more fitting of something like Serious Sam than of the somewhat pulpy, but not ridiculous, story that Deadfall Adventures is trying to convey. While these do not actively ruin the experience in any way, they do break the consistency that the game tries to aim for.
Overall, Deadfall Adventures a well-crafted game despite its disappointing narrative pay-off, basis, and tone inconsistencies. The first-person shooting mechanics are fine-tuned and the game has quite varied environments to compliment the shooting mechanics. A little more work at crafting a more rounded experience and this could have been essential.
Please Note: The multiplayer portion of this title could not be tested during the review period.