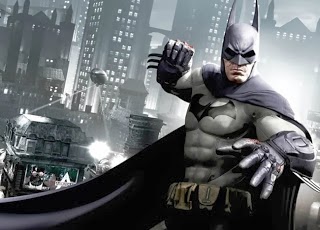 With the console release of Batman: Arkham Origins just behind us, I stumbled across the iOS version of the title, noticed that it was a free download and decided to give it a go. Without any knowledge of the game prior to the download, I went into the title, well, blind as a bat to what I’d be doing. Once the darkness lifted, I’ve found that I’m enjoying myself quite a bit with this mobile title.

If you’re looking for a full on Arkham Origins game, you should stick to the console version of the title, but if a fun little pick-up-and-play title is okay with you, this could be a satisfying download. Stripping the title of its narrative to the bare bones, this mobile version sticks solely to the fighting. And even the fighting is stripped down to simply attacking and defending as well. But this works and it works quite well for a mobile experience. Let me explain further.

Starting out, you’ll only be able to defend by touching two fingers on the screen and attacking by tapping the screen, with a series of taps initiating a short combo string, which can at times be extend into longer combos via timed on-screen directional swipes. There’s two stances to take advantage of: Attack Stance and Guarded Stance, and which are self-explanatory. The game is broken down into four different sectors with increasing difficulty and level completion awards not only money, but experience. Levelling Batman will acquire a host of new skills (attacks) for both stances and these skills start to change the dynamics of this title, finding you rapidly swiping the screen and tapping timed prompts for devastating blows on the opposition. 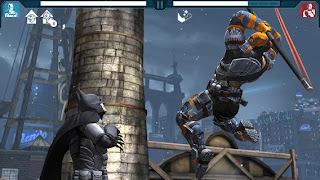 Money earned in-game is used to purchase new suits for Batman to wear, which bring substantial stat increases along with them. Each of the skills and stances can also be levelled to maximise their efficiency as well. Acquiring money is relatively easy and once you acquire all of the upgrades, you’ll be throwing Batarangs and unleashing brutal attacks with relative ease. Yet, what makes it so rewarding is that fact that the enemies offer up a significant challenge – forcing you to master each type of enemies’ attack patterns, as well as when to use your own attacks/skills without them being blocked or you’ll never find yourself victorious when up against some of the longer enemy waves.

Arkham Origins is one of the better looking titles available with sharp HD graphics and it sounds just as to be expected. The free-to-play side of the game is brought in courtesy of a stamina bar that can be depleted in about 10-15 minutes of play, yet it refills pretty quickly. This makes it a great title to grab when you’ve only got a few minutes to spare and also helps to keep the game’s repetitive nature at bay. The game also doesn’t beg for your money either and truthfully, in my time with it I never felt like there was any reason (or need) to spend any money on it, which is quite uncommon for a F2P title. Maybe the game is designed as a loss leader to make you want to play the full version on console? If so, it certainly worked for me.

All in all, Batman: Arkham Origins isn’t a standout title for the iOS Marketplace. Being a F2P title that offers up a good deal of fun without the common headaches associated with the sales model makes it worthy of taking a look though, especially if you’re avid fan of the Bat.

(On the other hand it’s rather simple and personally I’ll be sticking to Infinity Blade 3 – ed).

-Chris I
Editor-at-Large
Find me at Twitter: @Slapshot82
Find me at Game Center:Slapshot82