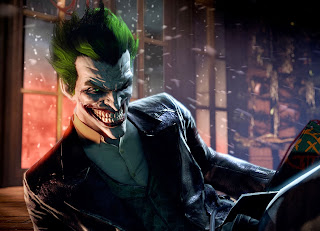 It’s time for one of those dirty little admissions that no game critic should be making; I haven’t played either of Rocksteady’s Batman games. I know them by reputation to be some of the finest examples of games this generation, however, and that’s especially impressive considering they are licensed titles.

So Arkham Origins was meant to be the opportunity to remedy this gap in my gaming experience and become one of the legions of fans for this franchise.
Boy was I disappointed. I can only assume that Rocksteady’s games are better than Arkham Origins (which was developed instead by WB Montreal), because I can’t for the life of me imagine how this formula could be held in the kind of regard that it is.
By no means is Arkham Origins a poor game, of course. As with any other big-budget production is is a slick and easily digestible experience. And there are moments of absolute brilliance. Stealthily making my way past tough encounters by using Batman’s gadgets was a great experience; it’s how the real Batman would do it, after all. And the detective sequences, which I understand to be new to the series, is inspired. Recreating a crime scene as though it was a recording that I could rewind and fast forward to hunt for clues quickly became a process so natural that I’m surprised real detective games haven’t tried to do this in the past. 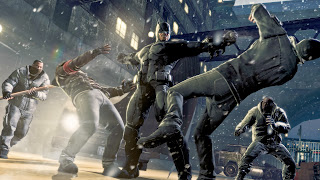 If nothing else, Batman: Arkham Origins can claim that it’s done something for the games industry in paving the way and showing developers how crime fiction games should be done. Sadly that’s probably not the legacy that the developers of this game were aiming for because those detective sequences come far too infrequently over the game’s 15-hour run time. What the developers really wanted to impress players with is the ‘bone crunching’ combat.
At first I found this combat to be really engaging. It’s very counter-heavy and rewards players that make regular use of evasive maneuvers, and I do like a good dodge. It’s also fun to use all those nasty combat gadgets that Batman has access too – in fact the options when it comes to combat are on the surface quite deep. There’s also a lot of weight behind the combat, and the heavy ‘thwack’ sound from landing a solid punch is a visceral reminder that Batman is a powerful brawler. The first couple of times that I waded into a battle with 20 (or more goons) and proceeded to beat the load of them up like only a superhero could were surprisingly intense, and just how I found the adult turn that Batman has taken in the film industry immensely engaging, so too do I find the angry Batman of Arkham Origins an interesting way to present a ‘hero.’ 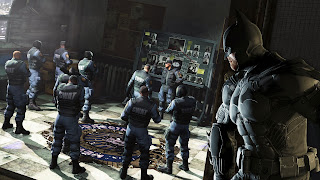 But as the game wore on I started to realise just how formulaic the combat is. It’s great that Batman is agile and has a wide range of counters built into his moveset, and because these counters are contextual the fights look visually dynamic, but mechanically they’re barely interactive. You’ll see an easily-projected attack and counter it. Then you’ll get a punch or two of your own in. You’ll do this over and over again until the game starts throwing guns and unblockable attacks at you and then you’ll learn to dodge and take them out as a priority.
There’s the illusion of variety in the way the combat challenge escalates, and certainly Arkham Origins knows how to challenge the player, but what started out as an engaging and intense combat system becomes formulaic far too quickly. In fact, given how little players personally move Batman around during a combat (he’ll move to his target all by himself by pressing an attack button), I would argue that Arkham Origin’s combat is generally no more interactive than a quick time event. The only reason I can think that more critics haven’t pointed this out is because there’s a lot of smoke and mirrors going on to convince players that they’re more in control than they really are. 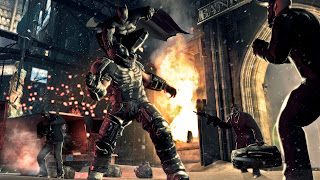 It doesn’t help that the promise of exploring Gotham City also wears thin quickly. The city is actually a ghost town populated solely by mobsters; there is never a civilian in sight, and cars don’t drive around like you would expect; even on the main roads. The narrative attempts to explain this by telling players that it’s Christmas Eve and the city is under curfew, but it’s quickly obvious that that’s a convenient excuse to simply not program a living city.
Because the environment is so empty, it’s also quite dull to explore. There’s a bat signal pointing players to the next major objective and that’s where players will head. Distractions such as side quests or crimes in progress are just that, distractions, and don’t offer nearly enough of a reward to engage with over the longer term.
The game’s redemption comes from its narrative, which is more than adequate to encourage even the most casual Batman fan to complete the game. As an origins story it has freed the developers up to throw every villain they felt like at the players, and so players will encounter classic enemies such as Penguin, Joker and Bane, as well as more niche DC nasties such as Deathstroke and Copperhead. The way the narrative plays out is pure comic book action, but it’s fitting and engaging. The encounters with these villains, as boss battles, are the real highlight of the combat system too. 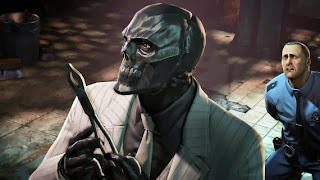 This game features a multiplayer mode too, which is a 3-v-3 deathmatch with a twist; Batman and Robin are stealthy vigilantes that are trying to defeat both groups. It’s a decent twist on the standard multiplayer game and it’s nice that some effort has gone in to making this more than a multiplayer game shoehorned into a singleplayer game unnecessarily (See: Tomb Raider, The Last Of Us), but it’s still, as far as I’m concerned, a waste of development resources. I would have preferred a more interesting Gotham City to explore when playing by myself.
Ultimately Batman: Arkham Origins is a blockbuster game. That means both good (it looks great and plays cleanly), and bad (it’s completely superficial). To compare this origins story to Batman Begins is to show that the games industry still lags well behind the film industry in terms of providing rich experiences. But at least Joel Schumacher wasn’t involved in the production of this game.