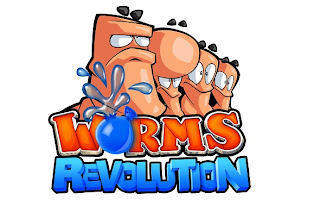 I look at the dictionary definition of ‘revolution,’ and I have to question its application to the newest Worms game. There is nothing revolutionary about Worms Revolution, but then again that’s not really a bad thing.

In fact, those times that Team 17 have really tried to mix up the Worms formula, it’s generally fallen very flat on its face – anyone remember Worms Forts: Under Siege? So I was more than a little relieved to see that this game takes place on a traditional 2D field of battle. No way for Team 17 to screw this up, right?

Right. Worms Revolution is a remarkably safe but highly effective entry into the Worms franchise. Just about everyone would have played a 2D Worms game at some stage by now, so you’ll all be familiar with the turn-based action, the arcade-like physics and the massively over-the-top weaponry. There’s online play as well as local multiplayer, which is just as well because the single player game is predictably dull. I don’t think the computer A.I. in this series has been upgraded since the first game way back on the PlayStation and PC, and that means enemies that make ridiculously stupid decisions on the low levels, and are Godlike in accuracy on the higher difficulty levels. 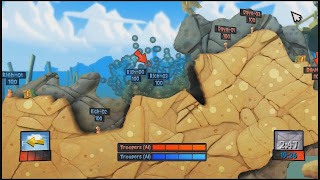 Multiplayer is where this series has always been at, and even all these years later the cartoon violence of Worms over a couple of beers with mates is a perfectly enthralling way to pass an evening or weekend. It’s still laugh-out-loud funny to watch a friend accidentally bazooka himself, and the weaponry and randomised levels have been balanced to a fine edge after so many years of development practice by Team 17. Because of this experience and heritage the finishing moments of any given level are invariably tight and victory is almost always by the thinnest of margins. I’m rather surprised we didn’t have the police come knocking with noise complaints by the neighbours after one especially close session.

All that said, it would be disingenuous to say there is absolutely nothing new about Worms Revolution. There are a couple of tweaks to the formula that make this worth a look in for Worms fans, or people who haven’t played the series for a while. The obvious first – this is a fine looking game. The character models and environments are now constructed in lovely HD 3D. Though the action is exclusively in 2D the animation is far slicker and the worms have a greater variety in personality this way. 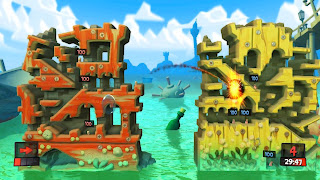 So that’s a plus. The other neat addition is ‘forts.’ Players can select one of these maze-like structures as their own, and then play battles through labyrinths of corridors, rather than the traditionally open environments. Even though you’ll be doing much the same thing when fighting in these as you would in a normal game, it does add a nice dynamic to the game when there’s plentiful walls and things to hide behind and the ariel assaults are less effective.

Worms are also now able to take on ‘roles.’ A scientist worm has different capabilities compared to a soldier worm, for instance. These roles need to be bought through the in-game currency system, so players have plenty of time to get used to one role before learning another. That said, this is one gameplay addition I’m not sold on. For a party game (and Worms was the casual party game before Wii Sports was invented), the idea of classes and unlocks seems a little too complex for what this series is traditionally all about. That said I can appreciate the need to give the longer-term fans that extra layer of depth and customisation, and there’s no reason to play around with these optional extras if you’re just looking to jump in and get shooting.

Worms is at its finest when it sticks to what it is good at – multiplayer blast-em-ups. Though online multiplayer will never replace local for this kind of game, and though online is how I play most of my multiplayer these days, Worms will never fail to get a smile from me.