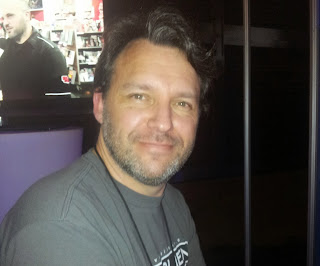 Interview by Aidan B.

At the EB Games Expo 2013, one of the more entertaining sections was the Aussie indies section. Australia has a growing collection of high quality developers operating in small teams creating innovative and creative games, largely free of the constraints of working for a larger developer.

One of the indies that we spoke to there was Dale Ward, of Evil Aliens, a Canberra-based indie currently producing Orbitor, a creative little gravity-based puzzle game that is also coming to consoles courtesy of Nnooo. This game was one of our highlights of the show, and we sat down with Ward to chat with him about the experience of attending the EB Games Expo, his ideas for this game and future releases, and his thoughts on Australian games development and Kickstarter

Digitally Downloaded (DD): How does your game compare now to what we saw last year?
Dale Ward (DW): We have kinda implemented a lot of stuff into the game over the past year. Even though it’s a new demo that you’re seeing this year, it isn’t revealing a lot of the stuff that we’ve have been working on.

We are trying to add a lot of depth to Orbitor. Even though on the surface the game looks like an arcade game and is a little shallow, we are hoping people give it a good chance, because it actually has a lot of depth to it. We will reveal that other stuff when it’s done. Originally we had a points system in our public demos, but we’ve removed that and worked in a greater emphasis on the story so people don’t feel like it’s a purely arcade title. We’re also giving players the chance to go and do some free roaming so they can just have fun.

DD: Is this the only game you’re showing to the public this year?
DW: We’ve just been picked up by Nnooo who are developing Blast ‘Em Bunnies. They are working on publishing fellow indie developers now, and use the knowledge that they have to get us onto consoles which is really awesome. They are also publishing Cubeman 2 at this booth, so even though we are all individual developers we’re working together.

Over at the Academy of Interactive Entertainment (an Australian game development college) booth we have a little death match tank game on show too. I know from playing other tank games that they tend to steer really slowly. It’s like the developers of these games think “oh we’re making a tank game so they need to be slow because tanks,” and I thought to myself “why not make these things fast,” and so I developed a sci-fi hover tank mechanic where the thing bounces all over the place and the bullets are lightening fast.

It worked really well as a little prototype and was developed by two guys that are still students but they are working with us as well. They had to do something for their assessment, so we did the little prototype that they could try and market and play with. We didn’t think it would attract such a crowd!

In addition to those games we’ve got an Oculus Rift-like prototype that we’re mucking around with which is basically a first person puzzle horror/ sci-fi thing.

DD: What will that one be about?
DW: When I have an idea I do like a simplified version of it that tests the core bits that I want to get into the game first. So far I have just wanted to test whether walking around in the dark and trying to light your way through pitch blackness was going to work. And it does; it actually works. Nobody likes being in the dark, and I think people would be even worse off if it was a weird alien world and there was something in the dark that’s not particularly pleasant.

DD: So what’s it like being a games developer in Australia at the moment?
DW: Ahhhh…. it’s hard work

DD: Has there been a big impact with the change of government?
DW: It probably would be if you were relying heavily on funding, but we didn’t actually apply for any of that stuff. Not entirely sure why we didn’t put in an application; I think it was a lot of work and we figured that the amount of money that we would get would be minimal and we could just keep doing what we are doing and we will get there anyway.

Regardless of who is in power, preparing for that kind of funding really takes time away from game development. You tend to have to do the entry over and over again; it’s for Government funding so it has to be very thorough.

While we decided to not go through with the process there is a bit of funding out there now, which is good to see. It’s nowhere near enough but we are a young industry and the people in power who are giving out this money don’t fully understand the medium yet, I feel. When our generation start to get into power and are the ones giving out the funding… that’s when we will see decent levels of funding and people will appreciate games for their cultural value. I think Governments also need to better recognise that games don’t have to be just about entertainment. Simulations and the like can train people for all kinds of things and once that stuff catches on with the Government we will have money flowing everywhere and it will be a good time for everyone.

DD: Kickstarter has been a real game changer when it comes to financing game development. Is it something you’ve considered?
DW: Because everyone that works on Orbitor is a teacher at AIE one thing that we do as staff is that we go to career expos and talk to people about getting into the games industry. While we are there we show off the work that teachers and students do and Orbitor is one of those things we have been showing orbiter for two and a half years. We get a load of feedback from these events, and that has been really important to us! It’s actually a lot better to have someone sit next to us than having them online giving us random anonymous feedback which sometimes isn’t particularly constructive.

Kickstarter is really good but the problem is that it is now too successful and the guys that probably didn’t need it in money in the first place then go an wreck up the place. People like Peter Molyneux can get the investment for their games from any number of places, but they come in and take the focus away from the smaller guys. My Kickstarter didn’t succeed because we asked for too much money and we did not do a particularly good job in promoting it. In hindsight we should have asked for $5 thousand, not $60 thousand.