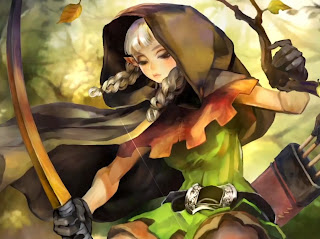 It’s been a wait for people in Europe and Australia, but one of the more controversial games this year has finally been released. Dragon’s Crown is controversial, not because of how it plays, but for its art style. That’s probably just as well because I can’t imagine people would have too much to really talk about in terms of how it plays.

With the lightest whiff of JRPG elements, Dragon’s Crown is a standard brawler where players move from left to right beating up hordes of enemies in the process. Missions often contain one “secret” room, which is all-too-obvious on how to unlock it. There’s treasure chests to tap on to unlock too, but that’s it, really. The rest of the game is about loading out your hero with the best equipment, and then running from left to right beating stuff up. 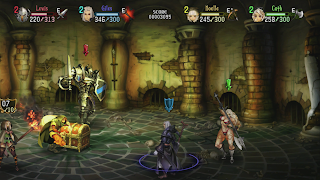 As with all brawlers this game is therefore best enjoyed in groups. Multiplayer is a great experience, with each of the character classes working well together and good teamwork can at times mean the difference between success and failure. Dragon’s Crown shines at its brightest when the action is thick and fast and players are a whirlwind of destructive energy; compared to the old Dungeons & Dragons arcade brawlers that this game is so clearly inspired by it’s impressive to see just how refined the genre has become. Refined, but still quite simple, with a basic combo system and quite obvious enemy attack patterns. The challenge in Dragon’s Crown comes in being a skill tester, rather than the strategic depth that I generally like from my fantasy RPGs.

The real highlight to the package is the bosses, which are gorgeously giant monstrosities and often feature interesting attack patterns that will REALLY test the twitch reflexes. By no means is Dragon’s Crown an easy game. There is probably too few different types of these bosses given the game lends itself to grinding, but it is nonetheless a highlight. 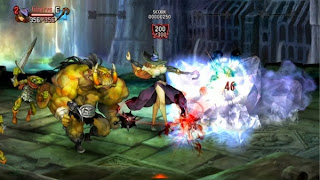 If Dragon’s Crown didn’t have such a distinctive art style it would then be quickly relegated to the back of people’s minds. It’s the kind of entertainment that appeals to a small group of arcade nostalgics, but for most people it’s hardly a standout genre. But Dragon’s Crown does have a distinctive art style, and it actually succeeds in both adding to and taking away from the overall experience.

Overall, Dragon’s Crown is gorgeous. Backgrounds and environments are detailed to an extent that I haven’t really experienced before. They succeed in really pulling players into the world, and the narration that features sporadically through the game complements the action perfectly. I was reminded strongly of a storybook as I wandered through the game’s world, and I was always keen to explore a new environment just to see how the developers have managed to water down the Dungeons & Dragons experience in such a visually spectacular manner. 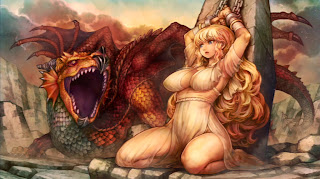 Characters meanwhile are drawn with an attention to detail that is rarely matched. Characters are big, chunky models and the developers knew they were the game’s strength – wherever possible the camera is zoomed right in close so players can see the most minute details on their hyper-styled bodies.

And that leads me to why Dragon’s Crown is so controversial – those hyper-styled bodies also happen to be incredibly exploitative. From the near-naked Amazon warrior to the nubile women that need rescuing Dragon’s Crown plays up the typical tropes for women in 80’s fantasy film and pulp fiction. The men, meanwhile, are hulking monstrosities of muscle. Often people who engage in these debates about gender in games point to that and say “see, why don’t critics complain about the sexualisation of men, what with their lack of shirts and so on.” The reality is that Dragon’s Crown’s approach to make roles is equally problematic – feel free to brush up on your understanding of the power fantasy and why this is a problem.

Now, I understand where this art style is coming from. Back in the 80s, when barbarian films were a genre all of their own, and Dungeons & Dragons was demonised like video games are now, the art style for fantasy games (such as the aforementioned Dungeons & Dragons) looked a little like this: 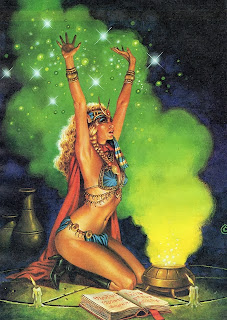 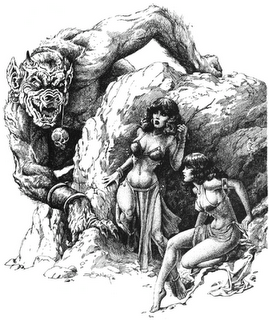 So Dragon’s Crown was designed to emulate that art style, and it achieves that to near-perfection. The question is, then, do we really want games that conform to 80’s tropes that have been long outmoded for being culturally exclusive? Probably not, to be honest. There are some truly amazing fantasy art styles out there that no longer rely on the chainmail bikini and dudes with muscles that rival the Hulk’s. We really don’t need for the genre to be playing to juvenile fantasies any longer. The fact that the Elf character manages to be an entertaining and suitable character design for the environment, despite being fully clothed (and in fact largely androgynous) is proof within Dragon’s Crown itself that the Amazon didn’t actually need to be near-naked. 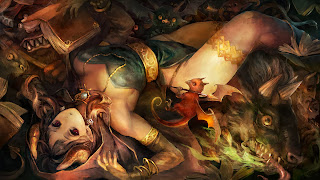 Over the longer time this decision to make the character art such an obnoxious throwback irritated me more and more, to the point where my enjoyment of the game was impacted. It is just so very unnecessary.

Aside from a bit of multiplayer fun, I didn’t find much value in Dragon’s Crown to be honest. It hides a lot of shallow gameplay behind some impressive art direction and a load of quite cynical exploitation. The fact that I’m not a massive fan of beat-em-ups notwithstanding, this wasn’t the dungeon hacking experience I was hoping for.

Hands on with Ryse: Son of Rome