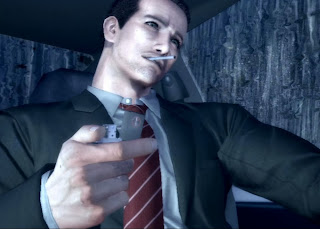 On paper, Deadly Premonition might seem like an awful game, and a majority of gamers and critics would have agreed with that sentiment back in 2010, when the game launched on the Xbox 360. Unfortunately, that’s the inherent issue with arthouse games; while there are certainly exceptions that buck the trend, a majority of ‘art’ games put an emphasis on leaving a lasting emotional mark on the player, rather than providing an “entertaining” experience.

As is the same for the art in general. Arthouse cinema bores people whose idea of film starts and stops at The Avengers. Many people would rather read Harry Potter than the kinds of books that float around literature circles. This is all fine, but it’s unfortunate that in the games industry there is the expectation that art games also appeal to the blockbuster fans. Else those games get slaughtered on Metacritic. Enter Deadly Premonition.

While there are critics who will be able to look past technical flaws and gameplay hitches in order to see the true genius behind an art game, there will always be a group who isn’t willing to accept subpar gameplay or mediocre graphics in favor of an unique experience.

(Read our other review of Deadly Premonition here)

So, due disclaimer up front: If you are not interested in games that are not perfectly polished experiences, then go and read something else at Digitally Downloaded, because Deadly Premonition is simply not the game for you. There are no explosive shooting segments, leveling up, or blood-soaked rampages to be had. There’s not even any multiplayer. When does that happen these days?

But for everyone else, please do keep reading. 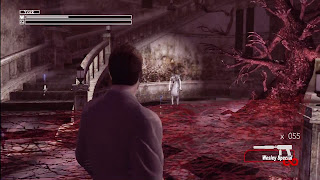 For the uninitiated, Deadly Premonition follows the exploits of Francis York, an FBI agent who is tracking down a serial killer whose victims have been ritualistically murdered, with each killing marked with the presence of mysterious red seeds. He eventually finds himself in Greenvale, a sleepy Pacific Northwest town that is as weird as it is charming.

Anybody who has taken the time to watch Twin Peaks might immediately assume that the game is a clone of that story, but Deadly Premonition quickly opens up and takes on a personality of its own. Trying to label it proves a difficult task; within the span of five minutes this is a game that had me going from clutching my sides from laughing to hurling expletives at the TV screen in confusion. Deadly Premonition works on so many different levels – not because its many layers mesh so well together like you would expect of a “good” narrative, but rather from confusing and confounding the player with the oddest assortments and mash-ups of music, visuals, and dialogue.

We’re talking about a game that is will thrust a player into a spooky or intense scene, only to throw them off by kicking off some light jazz music. The characters around town are bizarre; a personal favorite is the “mysterious capitalist” (that really is his job description) who communicates through servants who only speak in Shakespearian English. Agent York himself has a second personality called Zach, whom he seems happy to chat with wherever he is. Even if there are other people around.

As crazy as this all sounds, director Hidetaka Suehiro (also known by his nickname Swery, or Swery65) pulls it all off wonderfully, probably because at some point he decided to ignore any pre-conceived notions of what is right and wrong in a video game. It’s hard to nail down exactly what makes the experience so entertaining (and I imagine that the particulars will differ from player to player), but Deadly Premonition largely succeeds because it revels in its downright crazy world and it never lets go. This isn’t a game that throws in a one-liner or two and calls it quits; from start to finish, it throws the player headfirst into a pool chalk full of shameless cultural references, off-kilter humour, charmingly ugly visuals, and the kind of dialogue you’d be happy to hear in your guilty favorite low-budget sci-fi flick. 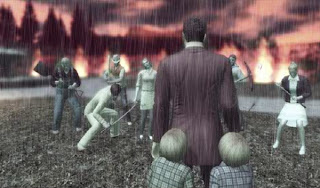 Unsurprisingly, the thing I want to talk about least in Deadly Premonition is the gameplay itself, but that’s probably because it seems downright pedestrian when compared to the rest of the game. For the most part, gameplay alternates between open-world exploration and detective work, and then some survival horror combat sequences (as if the game couldn’t get weird enough). Greenvale operates on a day-night cycle not unlike most open world games; places of business are open during specific hours, and residents also keep to their own schedules. There are numerous sidequests available to complete, and you can accelerate the passage of time by smoking cigarettes as story events and sidequests are tied to being at a specific place at a specific time of day (is this the first and only game to work a smoko break into the actual gameplay? – ed). You’ll also need to take care of York himself; not only will you have to eat and sleep regularly, but things like personal hygiene and vehicles must be kept up by shaving and changing clothes, and of course, repairing your vehicle and replacing fuel.

Investigating the town boils down to exploring the town, gathering clues, and interrogating and talking to the townsfolk. The survival horror sections are a tad more linear, and usually require York to solve simple puzzles while killing zombie-things that all share a terrible case of a bad back. It’s possible to avoid some of these fights (which are fairly clunky) thanks to a mechanic where York can hold his breath. You see, the zombies detect York by his breathing, so holding your breath will help to get you out of a tight spot.

The scariest moments are reserved for the Raincoat Killer, Greenvale’s own Ultimate Bad Man, Pyramid Head, and Tyrant rolled into one. This delightful fellow will show up at different points throughout the game to indulge in a bit of stalking. If he manages to grab York, you’ll be subjected to a chase sequence resolved largely by quick time events. At other times York will need to make like a Haunting Ground or Clock Tower character and hide somewhere. These moments do an excellent job at keeping players on their toes, especially when things begin to slow down. 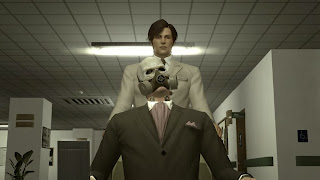 While it sports a new title, the Director’s Cut of Deadly Premonition offers only minimal upgrades, though some of the changes will undoubtedly appeal to those who were put off by the rough quality of the original release. Most notable are the ‘redone’ visuals, which are more clear and colourful this time around. They’re still not on par with current releases (not by a long shot), but the upgraded picture quality is a welcome addition, especially if you are playing on a modern HDTV. The development team has also removed the original version’s colour filter, which had painted the game with a rather dark and dirty effect, and didn’t work at all. Unfortunately, the new visuals come at a cost, as the game runs at a slightly lower framerate than before. Swery is many things, but a master of programming he (and his team) are not.

The controls on the other hand have seen a remarkable improvement. If you had played the original, you won’t find yourself frustrated with the way York handles this time around. If you hadn’t, you won’t be getting frustrated in the first place. Other than a handful of new suits and vehicles for York to hoon around in (these are included for free in the Ultimate Edition and are available as DLC in the regular Director’s Cut), there is no new story or gameplay content to be had.

Despite all the negative comparisons that you can draw between Deadly Premonition and just about every survival horror game I can think of, it’s hard not to give this particular game all the praise in the world. For a game that should be the most derivative title out there, it continually manages to surprise and confuse in the most delightful manner with its insane presentation, and by defying your expectations in some rather ingenious ways. It’s convoluted and simple, beautiful yet ugly, smart, and at the same time, incredibly stupid. Simply put, it’s impossible to pin down, and it’s marvellous.

I doubt I will ever run into Swery65 in my lifetime, but if I do, I imagine I will congratulate him on creating one of the greatest games ever, and then promptly proceed to laugh how crazy that statement is to make. But that’s fitting. After all, isn’t that what Agent York would do?