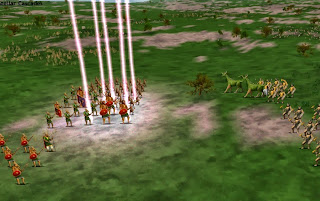 Well, Dominions 4 is rather quaint. It’s a game that I actually needed to delve into its manual to understand how to play it… and the manual is over 100 pages long. Am I showing my age to say I actually remember doing that with the strategy games of old (like, say, Civilization 2?)

The menu interface is from about 10 years ago, and the graphics are about 20 years old. In fact, the game would have been considered ugly 20 years ago. Sprites barely animate, the map is a blot of colour broken up into regions via lines, and watching the combat play out is like pulling teeth as units stutter along at a snail’s pace.

In fact, the game is genuinely inaccessible, and breaks all kinds of game development rules around aesthetics in getting there. For almost everyone, this means the game is broken, but for the small percentage of players that need a another 4X strategy game that they can look past these flaws, there’s something quite compelling about Dominions 4. 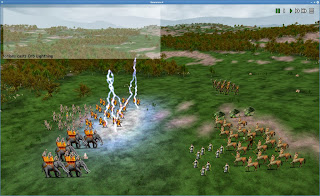 Even after spending a couple of hours playing the game I wasn’t entirely sure I knew what I was doing, and I was losing regularly to enemies for reasons I didn’t really understand. Slowly but surely I got the hang of it, and I’m no longer fighting with the interface and rules and instead concentrating on the strategy now, but even as a strategy game veteran I’m not sure whether I would be inspired to get to that point were it not for the fact I am reviewing the game. The process of going from a complete newcomer to being comfortable with the game is not an especially rewarding one.

But once I got there I was glad I did. There’s something epic about marshaling massive armies of fantastic creatures (fantastic in my mind, at least. This game does ask for a healthy dose of imagination). And with so many play options, here is one of those rare games that rewards genuine strategic thought. 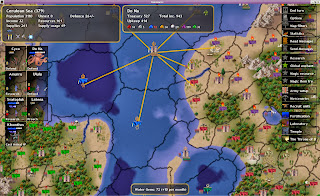 The first thing that’s immediately noticeable about the game is that there is so much depth to it that no human being could be realistically expected to experience everything Dominion offers. A couple dozen races and something like 2,000 units are meticulously detailed… not visually, because they are all ugly little sprites that might barely be coloured differently, but by pages after pages of statistics. Just trying to figure out which of two similarly-priced units to buy can involve dozens of clicks to carefully compare individual statistics.

The game offers some thematic strength too. Players take on the role of a God over a civilisation that’s based on a real world mythology. As with every 4X strategy game players need to manage both the domestic and military side of their nations, and there’s some nice espionage options with assassins, spies and seductresses for people that like their conquests subtle. Want to control a nation of righteous paladins? Go ahead! Is human sacrifice more your thing? There are armies of demons to control too. 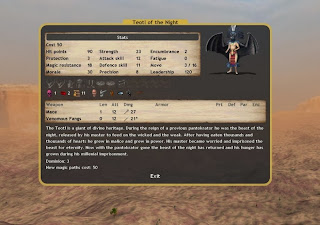 Dominions probably doesn’t go far enough in terms of providing moral consequences for your decisions, and so there’s no real sense that anything you’re doing is any more or less than utilising resources for gain, but in terms of gameplay variety it’s nice to see an attempt to be genuinely all-encompassing.

If the 2,000 units and 800 spells wasn’t quite enough depth, then the game is also modable. This was not a feature I was going anywhere near, but I’m sure for a select few it’s going to add even more value to an already packed game.

It’s not a false kind of depth, either. Statistics have a measurable impact on the outcome of battles and the enemy AI offers a complexity that belies the game’s amateur presentation. There are really robust multiplayer options, too, though naturally it’s a little difficult to get a game going considering the tiny community for something like this.

As a critic it is quite difficult to review something like Dominions 4. It’s objectively a bad game in the sense that there’s very little here to appeal to most people and it’s unpleasant on the eyes. But for the most serious of strategy gamers, there’s quite a bit of reward to etch out of the hard work.