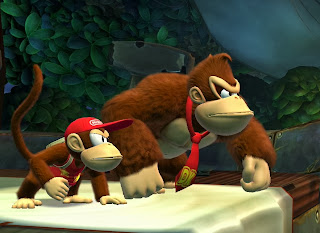 From my hands-on time with the game at the EB Games Expo, it’s very clear that the folks Retro decided that they didn’t need to change much when it came to the Donkey Kong Country series. Donkey Kong Country: Tropical Freeze brings Donkey, Diddy and now Dixie Kong together, collecting bananas and riding minecarts together in yet another difficult adventure. The series, originally released on the SNES has had many sequels and has never really moved far from the formula established in the first game, and that’s a bit of a pity because it’s now just starting to feel a little stale.

So Tropical Freeze is a Donkey Kong Country game. You move from left to right, collecting bananas, smashing bad guys, and riding mine carts until the end. I found that whilst playing the demo, even though new mechanics were being introduced, such as having to shake the Wiimote and Nunchuck to grow ledges to climb on, that nothing really wowed me this time around. There’s just the slight sense that there isn’t enough creative energy that’s gone into the game right now. 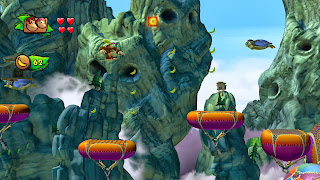 There is still a degree of difficulty that Donkey Kong fans will be glad to see, and from the levels I played, when I did die there was no sense of unfairness. The controls seemed to have carried over from the Wii version (sorry to everyone who hated having to shake the controller). I wasn’t able to try out the Gamepad, nor was I informed of the support the Gamepad will receive. Co-op returns but is still very difficult to play without a careful coordination. Super Mario World 3D this is not.

Tropical Freeze looks amazing on the Wii U and great in HD. Nintendo and Retro have done a great job of refining the look to make it smooth. The levels are dynamic and like in Returns shifts into the foreground and the background quite often.

I’m sure that Donkey Kong Country: Tropical Freeze is going to be a blast to play, but I do question longevity of a game that hasn’t done anything that the previous Donkey Kong Country game we got three years ago. Sure the levels will look new, but is it worth paying full retail price for? I’m not sure at this stage.

Deadly Premonition Visual Companion; I want more games to have these