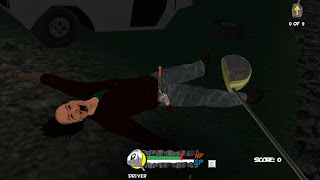 Variety in video games is usually seen as a good thing. People appreciate varied character creation tools, varied gameplay activities, and varied skill trees; these all fall under the banner of positive things we like to see in a game. However, I propose that variety can also be seen as a negative of a game. For a case study, take a look at The Curse of Nordic Cove.

The Curse of Nordic Cove has a lot of variety. While only having a total of seven levels, the activities the players perform are varied to the point that the game can only be described as a general action game. The problem is that all of these activities are sub-par and too brief, leading to frustration when several poorly-explained and underdeveloped mechanics are replaced with a new set of poorly-explained and underdeveloped mechanics. 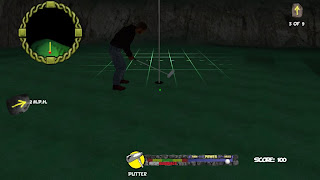 The story and visuals of the game are tolerable. A short monologue explains that a curse has been befallen the golf course of Nordic Cove and the dead have risen despite all of them being either Grim Reaper-esque ghosts or werewolves. From there you follow the Cussing-More-Than-A-Sailor punk protagonist, the nerdy researcher, and a maintenance man turned supernatural expert as they try to save the researcher’s daughter and stop Big Bad Guy #645 from being resurrected. Despite some plot hiccups, the story doesn’t pull any punches and it is fairly predictable.

Presentation is one thing, but what every game needs is compelling gameplay to back that presentation up. Which unfortunately this game seems to forget. The game starts off with what should be nothing short of incredible; a mix of golfing and melee combat. From there the game moves away from this one brilliant idea and starts throwing in more generic stuff such as simplistic puzzle-solving and on-rails shooting. There’s even some horror and stealth sections, which are by far the worst offenders for being absolutely broken yet easy enough to get through. For the most part brute force is the only path through the activities, which results in a dull experience devoid of fun or skill. The obligatory puzzles do not even provide some solace of intelligence gratification, as the puzzles are dirt-simple. 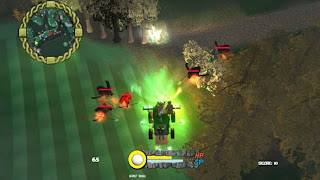 When I think about this game, I think of it being the result of a couple of lazy college students. It’s a cute idea but it suffers from an utter lack of any focus. At first there seems to be something of a focus; the story takes place on a golf course and the game has the player golfing while fighting off enemies. Frankly, EA needs to borrow this concept for the next Tiger Woods game, because it’s an improvement to golfing games. But then that premise is forgotten in favour of silly puzzles, silly tractor-driving, and dull on-rails shooting that add nothing of substance to the game. It all feels like a game made by a group of college kids who are taking a games workshop project and decided to localise it. Congrats to them for releasing their end-semester project, but next time be brave enough to make that golfing roguelike that this game could have been.

Welcome to the new-look Digitally Downloaded!