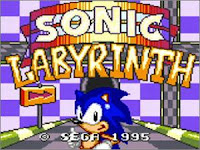 Calling Sonic Labyrinth one of the less beloved titles in the Sonic the Hedgehog franchise is something of an understatement. A frequent contender for worst game in the series during fan discussions, Sonic Labyrinth makes its debut on the 3DS to virtually zero applause. Yet in some perverse way, it actually managed to captivate me.
Sonic Labyrinth’s entire concept is based on stripping away the blue blur’s iconic swiftness by equipping him with speed-draining shoes. Naturally, relieving your protagonist of one of their most iconic traits isn’t going to be a fashionable design choice from the outset. Subsequently tossing the hog into an unfitting isometric world and tasking him with fending off foes whilst hampered by some of the most atrocious collision detection in recent memory probably doesn’t help matters for most players.
The stages in Labyrinth are hardly traditional. In order to progress, Sonic needs to collect three keys and locate the exit. Of course, about 75 per cent of the levels barely qualify as the titular labyrinths and the ones that do are numbingly obtuse, thanks to poor implementation of warping. The result is an experience that defies most franchise norms for nebulous benefits. Writing the game off by the first boss stage is probably warranted. 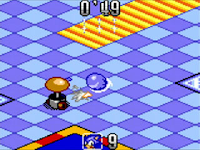 Despite the alleged lack of speed, I actually found this to be among the faster paced Sonic titles insofar as spin-offs and side games go. Sonic does move sluggishly while traversing in his perceptibly anthropomorphic state, but adapting to the game’s stop and start spin-dash mechanic makes things breeze by at the speed of sound. The game goes so far as to enforce increasingly strenuous time limits, eventually compelling the player to embrace the full-dash approach. Walking is only ever necessary to recollect the keys you’ll inescapably lose to the shoddy collision detection.
If it weren’t for the alienating design decisions and general lack of appeal, Sonic Labyrinth’s fairly well-rounded difficulty level could also be appreciated. You’re permitted to choose the amount of lives you want from the outset, the game progresses at a brisk pace, and the stages are typically small enough that finding a key is never too much of a drag. Should one key be too obnoxious to search for, the pause button allows you to deviously search for it without sacrificing precious time. This may be regrettably outweighed by how easy it is to lose your keys and have to recollect them from their original spawn points, however. 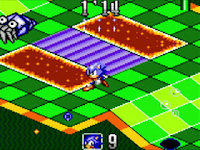 A couple attempts are made to keep the design fresh. Each world tends to have specific obstacles and foes to prevent the minimalist colour-swapped environments from becoming grating.  Power-ups, however ineffective they end up being, at least illustrate a shot at further integrating Sonic’s heritage. Chocolate sprinkles on stale bread, perhaps.
The rest of the game is so commonplace that it becomes more tempting to lump Labyrinth’s mediocrity in with its flaws; a merely acceptable soundtrack and dated isometric interface aren’t going to be key selling points. Taking the datedness into account though, I did find the isometric perspective to be well implemented, preventing players from confusing routes in the various tiered levels.
I likely won’t play Sonic Labyrinth ever again in my life, but it at least evoked emotions via its conceptually inspired premise. That’s more than can be said about Aspect’s typical apathy-inducing outings. This 3DS re-release will do little more than uphold its notorious reputation, but it might well be a venture worth considering for those with intrepid tastes.