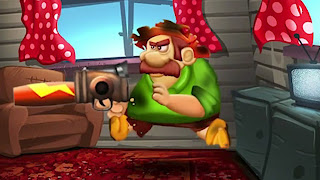 There hasn’t been that many free-to-play games on the PS3 to date, but those that are there are generally definable as console games. Titles like From Dust and DC Universe Online are free-to-play, and haven’t necessarily been well received by the PS3 gaming community, but they are at least on a superficial level a full console title.
Deathmatch Village is that other kind of free-to-play game. It’s much more like one of those iPad or PC games that you download, play once and then move back to a full-priced game or go back looking for a decent free-to-play. In fairness to Deathmatch Village, it is still in beta, and it’s feasible that the game will get a dramatic boost in time for its “formal” release, but since it’s available to everyone right now, it’s also worth warning everyone away from it because while it might not cost anything it’s still an investment in time. And people’s lives are too short to waste on this kind of thing.
As the name of the game suggests this is a deathmatch game. It takes place on a 2D plane and players are tasked with jumping around the place, shooting one another, and collecting pigs. Those pigs then get carted back to the player’s base, and can be converted into bacon and such for cash. 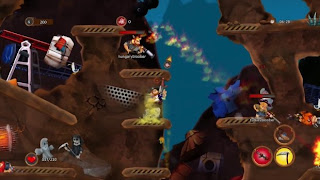 There’s two ways to play, either in a free-for-all or in a team match, but both modes play equally badly. Movement is clunky and unresponsive, and aiming is an utter nightmare because it uses the same control stick as movement. Why not map it to a dual-stick layout? Who the heck knows? Because trying to shoot people is so ineffective, it’s generally better to simply run in and swing away with the melee weapon but regardless of combat style the complete lack of feedback from attacks makes neither form of combat enjoyable.
Scattered around the arena are temporary powerups, and because the pigs spawn in a single location there’s some bottlenecking that does make that rare multiplayer match with the full six players on the battlefield hectic. Everyone’s struggling with the same set of controls so while it’s not exactly entertaining it does feel fair at least.
But despite being just released, and being free to at least download and try, I only got a single match filled with competitors. The vast bulk of my online matches featured one or two opponents, and as such were lonely and empty affairs. This doesn’t bode well for the game’s future considering there is no single-player game available or any way to progress unless competing with other players. 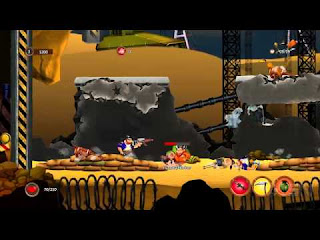 Outside of the combat the game pulls out its free-to-play monetisation claws. Everything you do in the game’s personal little “town” (read; menu) has a cooldown time associated with it. Turning a pig into bacon to earn some cash? Wait for 40 minutes, thanks. Buying some better equipment? Toss in that money then wait an hour or so for the “delivery.” Powering up your character? There’s a wait there too. Everything in this game forces players to put down the controller and go and do something else before it comes into effect.
Unless you pay real money, of course. Real money speeds up everything. Amusingly the game’s in-app real-money shop is currently down, so you can’t exchange your real money for virtual currency to speed things up. I’m sure that will be the first additional feature added in in a future update.
I like the idea of free-to-play coming to console, because there are some free-to-play games that strike that balance right between asking people to spend money, and providing them with enough of a game that they want to spend money on it. What I can’t understand is why any developer in their right mind would try and encourage people to spend money on a game by telling them that if they don’t they’re not going to be able to play the game for a while. It’s counter-productive because in this industry where people have so much choice, you don’t want to be encouraging people to play other games. It’s also punitive rather than positive reinforcement, and that never goes down well with gamers.
And so I can’t recommend Deathmatch Village short of some kind of miracle turnaround between this beta and the completed development. It is positively laden with demands to spend real money on it, but doesn’t come even close to offering enough quality gameplay to justify those demands.