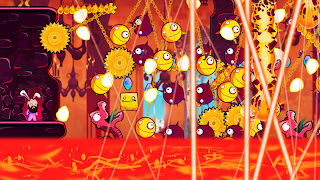 From the moment “Press Start” appears on the screen, players get a glimpse of what awaits them in Cloudberry Kingdom. The Kickstarter-funded side-scrolling platformer by Pwnee Studios features the customisable hero Bob as he traverses his way through various levels of increasing difficulty to the point of near-impossibility.

The first few levels in Story Mode are easy, allowing players to become comfortable with jumping around, gathering gems, and reaching the far door at the end of each level. With each successful level comes a slight sense of satisfaction, only to be quickly overshadowed by the difficulties that the next area brings. At some point, players will hit a figurative wall in the form of a difficultly level that hits players not only looking for a perfect score by nabbing that one elusive gem, but also those simply looking to get Bob to the end of the level thanks to the insane navigation through the blades, spikes, bugs, and other moving objects that the game demands. 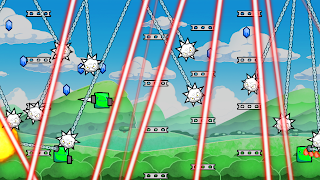 It’s at the point of hitting that wall that tempers will flare. Minutes, if not hours could pass in the uphill battle between Bob and a 20-second level’s end. The developers have offered some help in the form of the collected gems that can buy hints such as the route for a section of the level or even a guide to the entirety of the level as well as the ability to slow down time. Sadly, the game doesn’t do a good job of explaining this to players and I discovered it on accident while angrily pushing random buttons. Various powerups are also included such as a jetpack, a wheel, and even a cardboard box that can either make the experience more fun or more disheartening depending on how you perceive a game such as this.

If the campaign is too much to handle, Arcade Mode might be a somewhat nice alternative. Here there are some variations on the game such as Time Crisis which involves clearing as many levels as possible within the time limit, or Escalation which provides random levels of increasing difficulty. I found myself having more fun with Arcade Mode than the Story Mode, possible because of its more laid-back feel in the form of unlocking new Bob variations as a reward for reaching milestone levels. Granted, the levels and dangers encountered in Arcade Mode are similar to the main campaign, but the fact that these are more like mini-games makes it slightly more enjoyable. 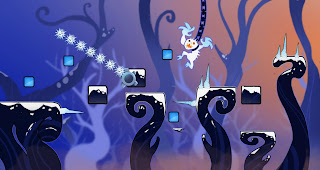 Free Play offers a chance to customise a level by a few criteria such as its length, Bob’s power, difficulty, and number of checkpoints. If you want to see want to experience Hardcore difficulty without all the work of getting to it first, this is the place to try it out. Just like Arcade Mode, it’s a short and fun method of testing your skills and Bob’s other powers. However, the yearning to return to Arcade or even Story Mode becomes too big to ignore. In short, Free Play is more of a training ground, and it’s only good for this purpose.

For the 640 backers, Cloudberry Kingdom is probably their platforming dreams realised: a fast-paced, perfectionist game with colourful levels that is littered with obstacles as they try again and again and again to dodge, jump, and duck past blades, fires, spikes and bugs in an attempt to hone their skills.

Sadly though, this game is not for those who are easily angered or simply do not have the time or commitment to such an endeavour. The demo on the start screen alone can intimidate a player such as myself. As soon as I saw it, I was reminded of that laser dance scene is Ocean’s Twelve where the rival thief reveals that he danced his way across a barrage of randomly moving lasers in an attempt to steal a Faberge egg. My thoughts on Cloudberry Kingdom are like that of the laser dance: it’s cool to watch, but I would hate to actually do it.