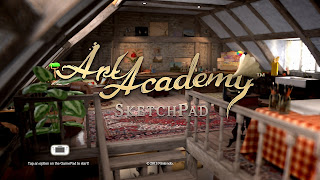 It surprises me that it took Nintendo so long to do this; from the day that the Wii U was announced I thought that an Art Academy game would be the perfect way to show off the console’s unique features.

And I was right. Unlike Nintendo’s other heavy-hitter Wii U games so far; New Super Mario Bros. and Pikmin 3, Art Academy SketchPad would not be possible on any other device except the 3DS, and completely uniquely for Nintendo, it’s also a game that the Wii U does fundamentally better than anything Nintendo has produced for the 3DS.

See, Art Academy SketchPad recreates the experience of being in an art class or club, and sitting there with your easel and paint kit and there is an object to paint or draw placed in the middle of the room. Your TV screen becomes that object – with 18-odd objects build directly into the initial download to choose between. Of course, if you don’t want to draw any of those you can elect to simply draw whatever you like.

Your Gamepad, meanwhile, becomes your canvas, and what a canvas it is. Unlike with the 3DS, there is a lot of screen real estate to play with and where the handheld Art Academy software can be uncomfortable due to that small screen size, the Wii U edition feels comfortable at all times. The relative weight of the Gamepad even works in the software’s favour in giving you a nice sense of resistance as you get to work with the stylus.

As with the 3DS and DS Art Academy titles, the Wii U software is the most perfect emulation of the experience of drawing or painting, bar none. Pencils behave as they should, watercolours spread across the canvas just right. Even the sound of the work in progress is nailed spot-on. Nintendo doesn’t nearly make enough of a deal of the engine that it has powering Art Academy, but it deserves all the credit in the world for giving people a realistic sense of making art. If Nintendo ever does go down the mobile/ tablet publishing path, I hope it builds an Art Academy app, because there is the slightest sense that the incredible engine is being wasted on Nintendo devices. 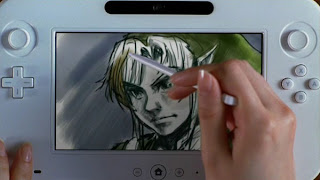 By that I mean the export options are painfully limited. I can’t see serious artists making long-term use of this software because it doesn’t export with a high enough resolution and aside from posting to MiiVerse the options for sharing completed works are minimal. That’s not to criticise the MiiVerse integration, because it works very intuitively from within the app, as it did with Pikmin 3, but a serious artist is going to want to post to the likes of Facebook, Twitter and Flickr as an absolute minimum, and getting art works from SketchPad to those networks at a high enough resolution to be respectable by peers is literally impossible.

This makes Sketch Pad a better tool for learning art, because an aspiring digital artist would be best advised to go and get an iPad and a good quality stylus. There’s nothing wrong with that either – that was what the 3DS and DS versions of the software were best at also, but unfortunately lessons are “coming soon,” so your best bet for now is to get some art technique text books and work from those while playing this title.

The other issue Art Academy faces is its price. At around $6 Australian, it compares favourably to the microtransaction-laden and generally inferior software that you’ll get with Paint Park on the Vita, and is certainly better value than going out and getting a uDraw tablet, otherwise known as the product largely responsible for sinking THQ, but at $6 Australian Art Academy fares poorly compared to the better art apps on the iPad.

As a comparison, Sketch Club on the iPad is dirt cheap, and comes complete with a fully-fledged art community to post works and get feedback on, as well as being able to export your works at a far more reasonable resolution. Even Adobe’s iPad apps, which are legitimate commercial products, are of a comparable price.

Art Academy is left in an awkward position, then. As an art product for serious artists it contains catastrophic flaws that make it a poor investment both in terms of time and money. As a product for casual doodlers it uses an engine that is well beyond what they need or want. Or in other words it’s a product designed to be of use for serious artists, and then targeted at a casual audience. This isn’t even really a criticism, it’s just a bit of weirdness that stops Art Academy from being a truly killer app that could have found the Wii U a completely unique audience that the PS4 and Xbox One couldn’t hope to reach; the creatives.

One other note that must be made – considering that the only real way to share content created on Art Academy is over MiiVerse, it’s a little worrying that Nintendo is out there deleting any works that feature nudity or associated themes – bikinis/ underwear/ excessive violence.

ART Academy, Nintendo. While I understand that you’re concerned for the integrity of the youth and all that, I’ve seen school groups in art galleries where there are paintings of naked men and women and those kids, I am certain, emerged from the experience unscathed.

– Matt S
Editor-in-Chief
Find me on Twitter: @DigitallyDownld
I’m also on MiiVerse if you want to see my horrible art: WaltzIT