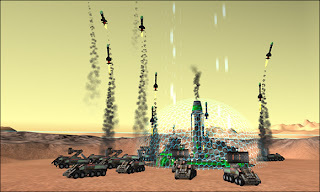 Let me begin by saying that I’m always a little wary of browser based Real Time Strategy games. I’m a big fan of the genre and yet many RTS games aimed at casual audiences abandon strategic depth for accessibility.

In essence, the idea of a simplified strategy game is oxymoronic. The main draw towards the strategy genre is depth, where players are provided with a wide variety of tools to overcome constantly evolving challenges. Being rewarded for playing intelligently and creatively should be enough of a positive that audiences can ignore the fact that the average RTS game takes a matter of hours to play out, if not weeks if you’re playing a Total War or Paradox Interactive game. By necessity, these games are inaccessible, but through perseverance and some careful studying of the metagame players are able to earn the sweet taste of victory.

So when a game like Conquer Mars comes along and promises to cut down the play time of traditional RTS games, I couldn’t help but assume that some strategy will be removed along with it. And in a way, I wasn’t wrong. Even though the game is still in a very early alpha build, the core experience is very clear. The gameplay is most easily compared to the Company of Heroes series, as it’s more focused on manoeuvres and tactics instead of resource management and creating buildings. In fact, the closest parallel to buildings Conquer Mars offers are mines, which are capture points scattered around the map. Mines serve every imaginable role in an RTS game: they create and upgrade units, provide stationary defence and also automatically generate resources for you to use. Each game of Conquer Mars degenerates into an exercise of “capture all the mines, defend your own mines and then attack your opponents’ mines”. 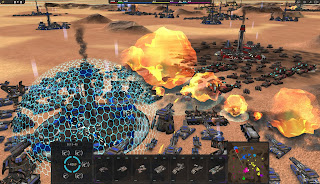 The game is simplified enough that there’s nothing to spend in-game money on aside from military units, some basic upgrades, and towers to defend your mines with. There are currently eight classes of units available in the alpha, with five being attackers and the rest serving support roles such as healing or shielding. Each has its own strengths and weaknesses, although finding out which unit is appropriate for which situation requires a good deal of trial and error. The developers have also promised a range of unlockable units in the future, which will be something to look forward to. That being said, it’s entirely possible to win a game using only tanks with no support; the balance at this stage needs work. I never quite felt rewarded for experimenting with different combinations of attack and support units because at the end of the day simply rushing with the more powerful attackers seemed to work just fine. And since there is only one type of resource, there are no drawbacks for players who pick the simplest strategy and run with it.

Because of this, I can’t imagine Conquer Mars developing the same kind of online following that gathers around games like Starcraft. There’s no need to discuss strategies and build orders when players can secure victory from using a single type of unit for an entire game. Furthermore, the ability to save and rewatch replays becomes trivialised when there isn’t as much to learn from a loss, and therefore the time spent watching past games might as well be spent playing new ones. To put it bluntly, Conquest Mars’s desire to present an abridged RTS experience hinders its gameplay variety, limiting the ability of gamers to play creatively. But that’s enough negativity for now, because outside all its shortcomings this game still has a lot to offer. 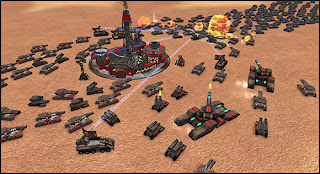 Graphically, Conquer Mars is satisfactory. Mars isn’t a setting particularly known for lush vegetation and stunning vistas, but that works to the benefit of a browser game which would otherwise be bogged down by an excess of terrain files. Troops are also modelled quite well, although when the game is zoomed out it becomes difficult to differentiate between each unit type. The music is very commendable, and it dynamically swells and ebbs in accordance with the amount of action happening on screen.

Speaking of action, Conquest Mars rarely lets up in the intensity department. As soon as the game starts up, you can expect units to be warped in and skirmishes to start dotting the minimap. Each player’s economic performance is always visible at the top of the screen, and so it’s important not to fall behind as you’ll become a prime target. In Conquest Mars, you can expect players to be knocked out of the running in as little as five minutes. While in any other game that would only be possible if a skilled player launched a particularly nasty rush strategy, in this one losing quickly is simply a natural consequence of the way the game is designed. For all the speed, pulling off a successful pincer movement is as satisfying as ever, and there’s something oddly cathartic about watching a sea of enemy tanks meet your own resulting in a spectacular array of explosions. Despite the lack of variety, Conquer Mars goes to great lengths to make the player feel empowered, and with the ability to instantaneously spawn tanks in groups of twenty with no population cap it’d be difficult to feel otherwise.

And so even though it goes against all philosophy regarding what the RTS genre should be, I have to admit that Conquer Mars is a lot of fun. So maybe it’s simplistic and will never reach the cerebral goodness of a full retail game, but it’s clear that the developers have a key concept in mind which will resonate with a lot of players. The focus on tactics and a departure from excessively complex gameplay might be a deal breaker for some, but for others Conquest Mars will be a gateway drug into the immensely rewarding world of Real Time Strategy. Just don’t be surprised if a twenty minute round or two of Conquest Mars ends up becoming a fifty-hour-a-week routine of Starcraft 2.