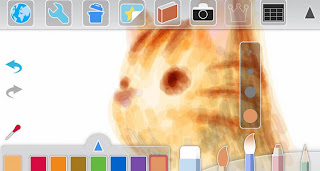 Sony has been talking up the social direction it wants to take its consoles and games. Even when it’s not conventional multiplayer where everyone sits down in front of the TV and plays together at the same time, Sony wants you engaged with your games and your friends when you’re out and about, when you’re the only one online, and even when you’re playing other consoles and games.

Paint Park Plus is a bit of a teaser for Sony’s vision. An extension on the previous free mini-art program, Paint Park Plus offers much the same, but with one critical twist – it is entirely social.

The first thing you’ll be prompted to do when loading this program up for the first time is to link it up with your Twitter account. From that point on everything you do and experience will be tied into a Twitter feed that uses hashtags in a clever way to create Paint Park Plus live “feeds”.

On the left hand of the screen when you’re on the painting screen is a row of icons showing you other recent doodles done by people. This can be minimalised with a single tap, but what it does is immediately create a sense of community around the app. Drawings are best shared, and let’s face it, on the Vita’s screen you’re not going to make glorious works of art, so everyone’s playing on the same field – they’re just having fun with it, and as such this has got to be one of the most accessible art communities that myself, a complete art dunce, has ever encountered. 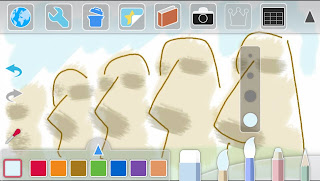 To continue building a community, the developers of Paint Park Plus are implementing regular themed “challenges;” where players have a word to build a drawing around, and then again post it to Twitter. Checking back in on those themed challenges, again, builds a nice sense of community.

For people who are really incapable of drawing, there are numerous join-the-dots games, blank pictures to paint in, and even the ability to send a request out to the Twitter community to draw something for them.

The actual interface for drawing is nicely designed, and though people serious about making digital art on the go really need to be using an iPad, it’s possible to come up with some nicely detailed images thanks to a reasonable range of tools built in. That said, to access all of them (including some essentials for halfway-serious art like the eraser) requires a couple of dollars to unlock off the PSN.

Going into this expecting an art package is the wrong approach to take – Art Academy on the 3DS or Colors! 3D is far, far better for serious art (let alone the innumerable iPad art apps). But as a fun little social toy for creatively-minded people, I really dug this.