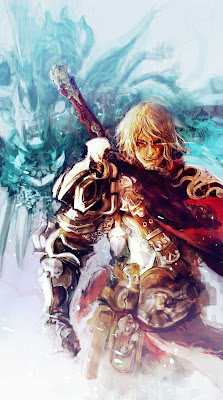 I don’t often support Kickstarter projects. As far as I’m concerned it’s still an unproven service and frightening in how little it holds the people that run the projects to account.

But every so often a project with real potential emerges that would not have been possible in any sense of the word without Kickstarter support, and without supporting it the chance for the vision to be realised is next to nothing.

And this is why I’ve supported Project Phoenix, a JRPG project from startup developer, Creative Intelligence Arts, that brings some great talent from around the world (though primarily Australia and Japan) together. It’s promising a commitment to old school JRPG values and this, according to the upstart company’s Director & Producer, Hiroaki Yura, has is something that has been missing from the genre of recent years.

“We believe they did it ‘right’ back in the day. We still want to have the same values, but with a modernised answer using today’s technology and our experience,” Yura said.

The Project Phoenix team are asking a lot from the Kickstarter supporters, it must be said. According to the Kickstarter page, they can’t even announce the full development team at this stage, and the promotional videos are decidedly low on in-game content announcements. Furthermore the release date is still years away – the projected release date is mid-2015.

Given the promise of an AAA-game at its current stage of production, that release date isn’t unreasonable, and the talent that has been publicaly attached to the game includes such quality as Nobou Uematsu, the man behind the Final Fantasy music, Vaughan Smith, the game designer behind L.A Noire, and Yura himself, who was on the Diablo 3 and Valkyria Chronicles. This promise seems to have been enough because the project has well exceeded its initial target of $100,000. At time of writing, it’s at $586,000, with 19 days still to go before pledging closes. This has been enough to hit the first stretch goal, though it remains to be seen whether the team will get to its final stretch goal of $1.65 million.

“It’s unbelievable! We’re totally lost for words. All we wanted was enough money to make models but the amount of sheer support we received is just tremendous,” Yura said.

“In terms of what’s next, we hope to achieve the next stretch goal which is to have the whole overworld modelled. Currently, it’d be similar to the overworld of Tactics Ogre which is basically just a map with points. Also, I’d really like to see a full production of music happen as well as we really want Uematsu’s music to shine.”

Having not run a Kickstarter before, it also remains to be seen how well the team will handle the continued demands around community management that the team will need to be proactive with for the next few years. “Since this is our first time, I’m not sure on the specifics how to manage the community. My best bet would be to listen, analyze and communicate with them as much as possible,” Yura said.

New as it is, there are some grand plans at Creative Intelligence Arts, and Yura and his team also have a plan that goes well beyond this game which, if the Kickstarter is to be believed, will be a resounding success.

“Yes there are many plans beyond this game… and beyond “the” game as well. We’re not ready to announce those yet, but please stay tuned!”