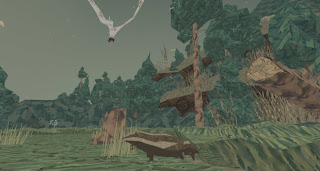 Shelter is a game that’s going to be hard to put a score on. An artsy exploration title which to my hands plays as more of a tech demo than an actual game (not dissimilar to the likes of Dear Esther) means some people will find themselves loving it just for being that little bit different to your average game. And by the same virtue others will find themselves simply not being able to click with it, and so come the time to review it a finite score is bound to polarise opinions. Luckily for me, however, this is a preview, so I don’t have to stamp a score on it.

The first thing you’ll tell your friends about when describing the game to them is “well, you play as a badger”, and rightly so, because it’s true, you do play as a badger. A mother badger, to be specific, who has been gifted with four wonderful baby badgers, and so it is her task (and therefore yours), to guide these little omnivores to… seemingly nothing. As far as I could work out, there is no goal to this game, only to protect and feed your quartet of offspring as you wander across the paper mache landscape. The previous statement presents my two major gripes with the game as I played it (which, I should mention, was a beta build and as such may not be 100 per cent representative of the title as it is released). 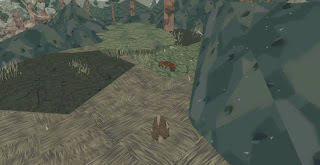 The first, and most immediate issue, is with the visuals. As I first started the game, I loved them, the washed out colours and blocky forms told me from the off that this game was not going to be a typical title. But fairly quickly, the love I first felt for the dulled palette mutated into contempt as it eventually made me have to tip my monitor backwards and fiddle with its settings just so I could actually see what was going on on screen. Here be a lesson for all developers: if you are going to make a game where the visuals are intended to be a major draw for customers, please make sure it does not actually make it harder to play the game (In case you were wondering, I still love the blocky models).

My other problem with the game is the lack of goals to reach (although, to be fair, the game does have areas where you will encounter things of interest, which I suppose some may consider to be goals. However I just didn’t find them really that rewarding or interesting enough to call goals). I am fine with the idea that process of exploration and discovery can rewarding enough to be considered a valuable gameplay experience, just look at Animal Crossing. But, for me, Shelter does not provide a world interesting enough to warrant the same treatment. Areas are all virtually identical, yes you’ll occasionally find a log, waterfall, or something new, but due to how samey the environments are none of this really acts as any more than the equivalent of wall tiles in a public bathroom. Yes they are there, and they might be quite nice, but do you really care? 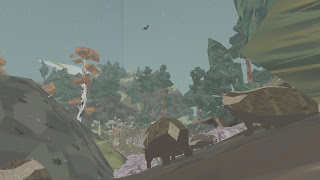 One would assume from a game based on exploration that you’d be able to explore every nook and cranny of the map, with a Elder Scrolls-style “if you can see it you can reach it” structure. Well the good folks over at Might and Delight felt a little bit differently, because the game essentially plays out as a series of branching paths, limiting the exploration hugely. You can’t really step out of the predefined areas set up for you, and the one time I tried, I fell off of the map and plunged into the endless abyss below. I’d imagine that particular issue will be resolved by the time the game releases, but it did just reaffirm to me that the exploration of this title is far from stellar.

Playing as a mother protecting her children, you would expect that you’d feel inclined to form feeling toward them, getting upset when they get separated from you. But when one of my pups got stolen by a bird, I could not have cared less. This may have been because it happened when I thought I was hidden in long grass and so I was too busy getting annoyed at the mechanics to necessarily care about what was going on emotionally. It seems like a real missed opportunity to make the game feel like a real journey, and perhaps all this will be fixed by the game’s full release. Just by adding a some basic goals to the game and adding some personality to the pups will transform this game into a really worthwhile experience. For now though, due perhaps to a few simple oversights, it just feels like a missed opportunity.